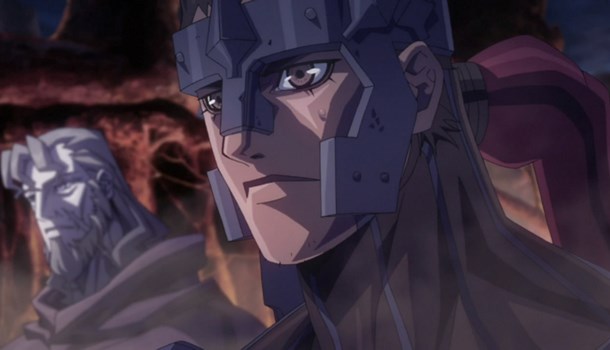 It seems to be the new thing to have a compilation of different animation houses create a film based upon a franchise in another medium. First we had The Animatrix, followed by Gotham: Dark Knight with one more coming based upon the Halo series. But before we blast off into space we need to head into the depths of hell with Dante’s Inferno. Is it a bloody action romp or does it create its own kind of sin?

Based upon the EA game of the same name, which itself is based upon the poem of the same name, this effort chronicles the journey of Dante as he descends into the depths of Hell to rescue his beloved Beatrice from Lucifer himself. He must make his way through the nine circles of Hell, combating demons as well as his own personal sins which will prove to be much more challenging than Dante could imagine.

Unlike previous attempts at having multiple studios produce content for one film, this one actually has a clear narrative from beginning to end. Normally we are treated to a number of short stories, but this time we actually get a beginning, middle and an end. This has both positives and negatives to throw at you - Firstly, the constant storyline maintains its coherency right the way through until the very end. We feel like we are actually experiencing a fully realised story. Those waiting to play the game will have to note that rather than serving as a prequel, this animated take on the old poem actually covers the entire game itself. While it does branch off into different places and minor details are different, you are basically watching the story of the game. Though for a blood-soaked action game, it’s unlikely to be the story you’re more interested in.

The negative of having a running storyline comes when a transition between animation studio happens. Having six animation studios on-board and there being nine circles of Hell, there is some doubling up, but when going from one circle to the next a change may happen, and it can be a very jarring effect. On the one hand, it is actually quite nice to see one animation studio's interpretation of Dante’s Inferno versus the other studios and the story manages to keep itself together until the very end. Each studio has a very distinct art style and the average anime fan won’t miss Production I.G.’s offering to the collection. Just be warned that the first time the switch happens, it’ll be a “what the hell” moment.

But how do the studios manage to stack up against one another? Well for the most part, it is actually quite good. While each is rather different most of the studios manage to stand up well against the others and add to the narrative of the overall story; the only stumble comes from Film Roman, Starz own animated studio which was responsible for the less than stellar Dead Space: Downfall based upon another EA game. They have the opening act with the introduction of the cast along with seeing the bloody consequences of Dante’s return, unfortunately this section is animated poorly with some damn awful artwork and direction, it’s thankfully the voice work and promise of a change in style that gets you to hang on until the next transition.

Be warned that Dante’s Inferno, much like the game, earns its 18 certificate. It’s bloody, full of nudity and is full of so much dismemberment and gutting it’ll make even the biggest horror fan stop and question if it is a little too much. It's true that Hell (or Inferno as it is called here) is supposed to be a horrible, disgusting place housing the worst of humanity as they suffer for their sins, but it doesn’t mean we have to suffer either.

Dante’s Inferno is going to be one for fans of the game or the horror fans that enjoy anime such as Hellsing. It can be gross, disgusting and horribly violent in places and to an extent shows what Hell could be if there is such a place. For those looking for something to pass the time but have weak stomachs then you may want to give this a miss. While it isn’t overly bad, it isn’t particularly outstanding or ground breaking in any real meaningful way either, although compared to a lot of game adaptations out there, you could do a hell of a lot worse.

Extras are lacking, with some animated sequences and a trailer of the game itself.

5
Not particularly ground-breaking, but enough entertainment for the violence fans.
LATEST REVIEWS