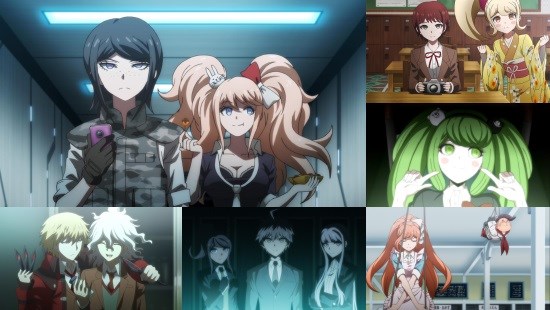 Danganronpa 3 was technically broadcast as two separate series over the course of the last season but frankly these shows are so heavily intertwined that you can’t discuss one without the other, and even the physical release in Japan is bundling the two arcs together so that you can watch them in the past-future-pat structure that you really need to in order to get the most out of things (although I actually feel that watching it future-past-future works better until you find out that the last episode of the past arc is actually part one of the last episode of the future arc and things get confusing). Now then, with the dust all cleared will we be released from our torment...or is it punishment time?

There is one disclaimer that I do need to point out here before we begin – the events of Danganronpa 3 are heavily tied into the events of the presently unanimated game Danganronpa 2 (quite why it was never animated is a bit of a mystery given that it was teased at the end of season one and people have been talking about it on and off for a while) so it’s necessary to be aware of two things going into this show:

1. You can watch this without any knowledge of the events of Danganronpa.

2. The Despair (or Past) arc which focuses on the characters from that game ends up working fine on its own and thanks to the intertwined viewing order that the show strongly suggests, exposition is drip fed to you at the relevant moments.

3. Given the above I do have to note that Danganronpa 3 - and of course this review - contain spoilers for the events of Danganronpa 2. You have been warned.

The two arcs of Danganronpa 3 act as bookends to the story of the Hope’s Peaks Academy storyline of the first three games - Danganronpa, Danganronpa 2 and Danganronpa Another Episode: Ultra Despair Girls (Just to be confusing, the game of Danganronpa 3 features a completely different setting and characters with only Monokuma bridging the stories as far as we know – the game's out next year). The Despair arc is set in the past and acts as a direct prequel to the first two games and follows the story of the 77th class of Hope’s Peak Academy (the year ahead of Makoto et al from the original series) and follows them as their happy school world begins to twist and change with the arrival of the ultimate high school despairs – Mukuro Ikusaba and Junko Enoshima. Thanks to them the 77th class will find that school life, even for prodigies such as themselves, will not be the innocent joy that they hoped for.

In the future arc we rejoin Makoto Naegi and the survivors of the killing game from Danganronpa. Now part of an organisation called the Future Federation they’ve spent years waging a war against the so-called Remnants of Despair who are willing to do anything in order to follow Junko Enoshima’s wish to bring despair to the whole world. Now at the end of the conflict Makoto, his friends and other new faces whose origins will be seen in the Despair arc find themselves playing in another killing game, and this time the former ultimate high school hope might have run out of luck as the bodies start to fall and he finds himself the prime suspect.

The two arcs really do make a reviewer's life complicated in a way because they start out so tonally different – the Despair arc starts life as a school comedy show complete with wacky characters, sex jokes and the search for friendship, whereas the future arc dives headfirst into a grim and gritty survival game. In its defence you do have to say that this has the effect of making sure that things don’t get too depressed right off the bat and the despair arc does really need a run up from its happy place in order to make you care about the characters and to make it all the more horrifying when it all goes wrong. Unfortunately though, the result at the beginning is that the Despair arc still doesn’t get quite enough time to develop its extensive cast beyond new teacher Chisa Yukizome and as a result you quickly find yourself gravitating to the much more dramatic events of the future arc. It would be an easy thing to decide that the Despair arc is just throwaway background fluff because of this, and it’s not helped by a lot of the animation shortcuts used only in the Despair arc as well with some baffling decisions in terms of the visual narrative – an event that’s a huge plot point in both this series and the game of Danganronpa 2 occurs entirely off-screen for example.

But by the time the series has progressed further to about the fifth episode (or ninth in terms of the overall order) things begin to change. The arrival of Junko Enoshima (voiced again to spectacular effect by series MVP Megumi Toyoguchi) has a huge effect on how you perceive the events unfolding and tension begins to wind tighter and tighter until an event that was only hinted at in the first game/original series happens in such shocking fashion that it deserved to be the watercooler moment of the season. The future arc however begins to rapidly loose tension at this point - tThe main issue is that the newer characters, despite having their back-story shifted into the despair arc to make more room, just aren’t as interesting as those we already knew. Kyoske Munakata in particular quickly drags things down by basically being utterly oblivious the entire time, launching accusations for which he has no real basis even when he attempts to explain them, and the absence of a classroom trial-type wrap-up in favour of an on-going mystery about who the killer is (I won’t spoil things but just be aware that any idea you come up with that would be cool or interesting is wrong) and the absence of Monokuma’s mocking presence really stands out. The whole thing ends up feeling quite disappointing given how you’d hoped things might be going.

Visually things are bizarrely different between the two arcs as well. Whilst it’s entirely understandable that Despair needs to start full of life and bright colours and Future needs to be grim and gritty, so much else just seems really thoughtless. Why is blood neon pink in the despair arc and then normal red in the future arc? Why are all the background characters in the Despair arc just featureless blue humanoids in school uniforms? It’s just a series of niggles that whilst they aren’t deal-breakers, are still very annoying.

The question must be asked then – Is Danganronpa 3 worth it? I honestly have to say yes here for the Despair arc alone which is, in spite of its visual flaws and slightly rushed story, really great and well worth watching. As for the Future arc... well, it’s okay but if you left the first series or the games as the ending of the whole shebang you wouldn’t be missing all that much. Even if you weren’t all that hot on the original I’d recommend giving this a go for the Junko-shaped insanity of the despair arc alone and you likely won’t be too disappointed.

You can watch Danganronpa 3: The End Of Hope's Peak High School in streaming form on FunimationNow.

7
Everyone will despair... in a good way!