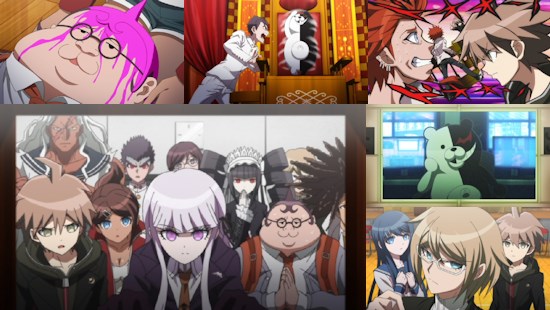 As Brits, we are perhaps more keenly aware than others of the constraints of a class-based system - if you're an average working class person, you aren't likely to be able to waltz into a prestigious private school for your education; a disadvantage that will arguably follow you through the rest of your life.

With that in mind, the opportunity for a decidedly average boy to enter a well-known private academy is not to be sniffed at, and it's this that leads Makoto Naegi to the gates of Hope's Peak Academy, a school for the most talented (or "ultimate") students in any given facet of life. Any hope born of this academy's name is short-lived however - no sooner does he set foot inside the school grounds does Naegi pass out, to awaken within a school building that isn't quite what he imagined.

With steel shutters over the windows and no discernible method of leaving, this is no ordinary academy - a thought cemented by the appearance of a black and white bear aptly named Monokuma, who fills in the gathered student body packed with "ultimates" in every discipline from being an idol through to baseball on what is going on. In short, this group are destined to spend the rest of their lives trapped within Hope's Peak Academy, with one caveat - if they literally get away with murdering one of their fellow pupils without anyone deducing the culprit, they're free to leave. Of course, these kids aren't just going to go for each other's throats even with these rules laid out before them, but as the psychological pressure upon them is ramped up by Monokuma in a variety of ways, it isn't long before the body count begins to tick upwards...

Given its video game origins (the English version of the original PS Vita game is available in English), you can probably imagine that there's a very clear structure to Danganronpa which translates into distinct story arcs within this anime adaptation - the pressure gets ramped upon the students, a murder occurs, the remaining students investigate and then a high-stakes "classroom trial" takes place to argue out and deduce the culprit. If the group guess right, then the culprit is summarily executed, but if they get it wrong... well, that's the end of the road for everybody.

The original game's mechanics are clear and present throughout the investigation and trial part of the series - where you'd normally be gathering clues to use in the classroom trial as "verbal bullets" to dismiss inaccuracies and guide the group through to a correct deduction, you're instead watching Naegi do this without any agency over proceedings. For the most part, this actually works pretty well - there's so much to squeeze in that at times you'll feel like relatively important points have been glossed over only to be tossed in during a trial, but you're usually given enough to go on to at least be able to "play along" with deductions to some degree as the on-screen crew piece things together. The cast of characters also bounce off one another in a pleasing way to drive the story forward with all of its larger than life twists and turns.

In addition to those mechanics, the show also takes its stylistic cues heavily from the game, particularly when it comes to the execution scenes which end each trial which are effectively ripped wholesale from the game - not that this is a bad thing, given that they stand out as particularly eye-catching moments that punctuate the show. The rest of the series isn't exactly a tour de force of animation, but it's certainly proficient and has an aesthetic that accentuates its crazy take on the murder-mystery genre, vivid pink blood and all.

Another big boost to the delivery of Danganronpa is the show's soundtrack - a wonderfully brash affair which quietly rumbles along beneath whatever is happening on-screen and explodes into life when required during its big moments. If you're watching the English language dub, it's a hit and miss affair - some of the characters are spot on while others just don't sound as you'd expect to or otherwise feel "off" in their dubbed treatment thanks to an equally inconsistent script. Still, the dub is passable, even if it doesn't quite live up to the superior original version - there are no issues with the subtitles on these discs, so the Japanese treatment may be the way to go.

As an overall viewing experience, Danganronpa: The Animated Series proves to be a lot of fun - it never takes itself or its setup too seriously, and it has the panache and characters to make its story work as an entertaining one in its own right. The only real question mark over the series is its rewatch value - this was my second time watching the series and for most part it's just as engaging on a second viewing, even if prior knowledge of the show (or game, I assume) allows you to spot the "wiring under the board" as it sets up events to suit its needs. If you're looking for a "pure" murder-mystery series then there are elements here that will frustrate you, but if you're happy to just come along for the ride then Danganronpa is a decidedly enjoyable rollercoaster to hop onto.

English and Japanese stereo audio with English subtitles. Extras consist of textless opening and ending credits, trailers, US cast commentary for episode one.

This release also contains the director's cut edition of episode 13.

7
A fun, larger-than-life murder-mystery series which wears its video game origins on its sleeve,
LATEST REVIEWS