Dance in the Vampire Bund (Streaming) 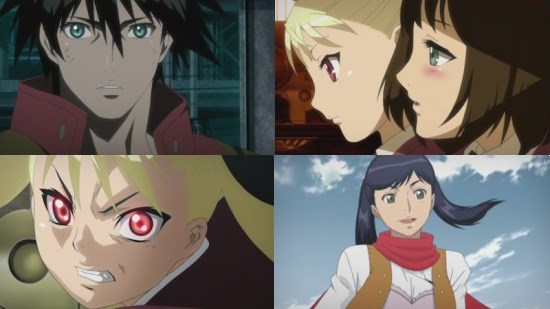 Dance in the Vampire Bund (Streaming)

While vampire stories have certainly become cool again of late, it would be a lie to pretend that such supernatural tales have ever been anything but popular, with the unique blend of terror, curiosity and sexuality that the vampire concept brings never really going out of fashion.  These key tenets of the vampire story are certainly well and truly on show in SHAFT's rather different adaptation of the Dance in the Vampire Bund manga, which is now available to view in full via FUNimation's streaming anime channel on YouTube.

We join the world of Dance in the Vampire Bund courtesy of a cheesy Japanese TV panel show, which discusses the possible existence of vampires with a largely vacuous handful of celebrities in light of a spate of recent murders where the victims have been found with what appear to be fang-marks on their neck.  As the question of whether vampires exist is tossed between celebrities, experts and the general public, so an answer to that question makes itself perfectly clear live on national television.

This brings us to Mina Tepes, the supposed vampire queen who is hundreds of years old despite only looking like a pre-teen girl - However, her looks are deceptive as she soon moves to use the wealth and power at her and the vampires disposal to create the bund of the show's title as a safe haven for all vampires off the coast of Japan.  Needless to say, this announcement isn't universally popular, and as the series progresses Mina finds herself up against various enemies from the political to those who simply want to see her destroyed or put under their control in the name of their own designs on power.

Alongside such machinations however runs a very different story; that of Akira Kaburagi, seemingly a normal high school boy aside from the amnesia he is suffering as a result of an accident... or at least so he believes.  When Akira runs into Mina, his life is turned upside-down as his past slowly returns to him, revealing both his own history and his relationship with Mina, which develops at least part of Dance in the Vampire Bund's story into one of romance throughout much of the series.

The trouble with the duality of Dance in the Vampire Bund's story however is that it never really seems to get its teeth (with every pun intended) into either aspect of the plot - Any love between Mina and Akira rarely feels real or concrete enough to care about somehow until far too late into proceedings, while the action and political intrigue exhibited by the series is often equally half-baked.  Even visually, SHAFT seem to have struggled with how to best represent the show, making the animation a mix and match affair during the first half of the series in particular.

That said, there are moments where Dance in the Vampire Bund does manage to deliver - The opening episode is an enjoyable take on trashy TV despite differing in tone to the rest of the series, while on occasion both the plot and characters and their delivery genuinely work well to create a good episode here and there.  It's this patchy nature which ends up being the biggest frustration while watching this series - The potential is clearly there for something much better and grander, but equally that potential is never realised to any notable degree.

Finally, we can't leave this series be without at least a brief comment on cuts made to the streaming version of Dance in the Vampire Bund due to some of its contents - While these cuts don't have any huge impact on the story as a whole, the major scene which does get the chop is carried out a little clumsily, and is at odds with other arguably more explicit scenes which are simply airbrushed for the television broadcast rather than cut entirely.  It's always frustrating to see the western release of any anime cut (although thankfully FUNimation will be looking to release this series uncensored on DVD), but on this occasion you aren't missing much at all.  It certainly isn't enough to lift Dance in the Vampire Bund above the realms of mediocrity it largely resides within.

Dance in the Vampire Bund can currently be viewed in streaming form in full on the FUNimation YouTube channel.

6
Plenty of good ideas and potential here, but sadly Dance in the Vampire Bund never reaches the sum of its component parts.
LATEST REVIEWS