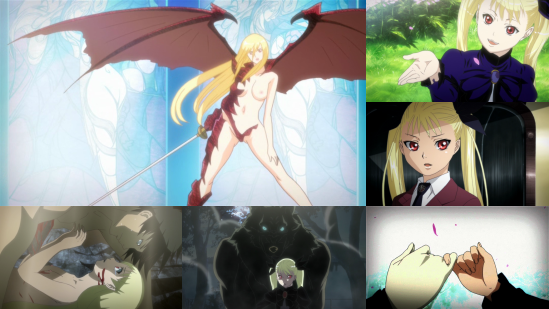 If you were told by someone on television that vampires - those blood sucking creatures of the night - were real, what would you think? Would you believe them? How about if they had proof? How about then? Okay... what if there was a live fight between vampire clans on screen, complete with gratuitous blood sucking from an idol by a person with an obvious denture problem and people vanishing into a puff of ash after being staked, all live on television. Having seen all this, would it convince you of their existence?

You can therefore imagine both the surprise and the over-riding sense of disbelief which the global population felt when a pale, blonde, red eyed girl with fangs, called Mina Tepeş appears on television, announcing to the world that she is the Queen of all Vampires and that she intends to create a colony for her race on a man-made island in Tokyo Bay.

This revelation by her majesty Mina opens human society to the politics and influence of the “monster” world, and it quickly becomes evident that the longevity and legacy of vampire society has given them immense economic and political power over the human world. This influence is wielded by Mina and her court of guardians, sub-ordinates and through the other factions of vampire society. However, Mina’s power as the ruler of vampire society isn’t as absolute as she believes and it is these internal and political tensions within vampire society, as well as their interface with the human world, which are the drivers of the stories within Dance in the Vampire Bund.

The other main catalysts of the story are Mina Tepeş herself and that of her servant and love interest, Akira Kaburagi Regendorf. Mina is a complicated character, possessing both an aristocratic arrogant personality; a demonic dictatorial persona with the tolerance and demeanour of Former Egyptian President Hosni Mubarak and the persona of an innocent and pure young teenage girl, with the ability to quickly switch between incessantly. This is something which I personally find truly fascinating, especially her ability to brutally punish her subjects while at the same time caring and looking after them, especially the lesser advantaged vampires who she intends to protect within the bund. There is something almost masochistic about this kind of behaviour, which makes for a truly interesting individual.

Thankfully, her amnesiac servant Akira is much easier to read. Born into an ancient family of lycanthropes in service to the vampire royal blood line, he made a promise to Mina as a child to always be at her side; one of those “pinky promises” that always seem to bite you in the backside. Unfortunately for Akira, his memory was lost during a secret mission, and he forgot his relationship and promises with Mina so imagine his surprise when he finds her crying in his school. Nothing helps cure amnesia like a good bit of emotional anguish. As his memories return, he rejoins Mina as her servant, protecting her from those who wish to over-throw her and fighting those who wish to learn the secrets within his memories.

Dance in the Vampire Bund has been a bit of a surprise for me. What I expected was an anime version of Stephanie Meyer’s Twilight series, only with more naked under-aged girls. What I got instead was something actually far more enjoyable. The series has well animated action scenes, worthwhile dialogue and overly complicated plots which just happen to provide the back story for those fights and action scenes. For those who are interested, the series is also full of fan-service involving nudity of both questionable and non-questionable kinds - nothing too offensive but you might not want to show it to the un-initiated anime fans. Unfortunately I am unable to compare the anime to the well established manga upon which is based, but from the isolated images I have seen, the anime is pretty true to the manga if only in terms of its art style.

The series in general is very well produced, well animated and has a well-crafted English dub, although admittedly it can be just a little trying at times. However, Monica Rial does make a very good Mina Tepeş and has gotten her voice down to a fine art, which proved to be rather refreshing.

Unfortunately, on the flips side of these positives all is not well with this DVD release. While watching the episodes on the first DVD encoding issues were identified, the effects of which were shadowing and discoloration in areas of contrast, which just happens to be extremely noticeable when faces and skin tones are involved. Thankfully, this issue is not present within the opening or closing credits, which means that it is the encoding of the episodes themselves which is at fault. Having queried this issue with Manga Entertainment here at UK Anime, it's been confirmed that this is almost certainly an issue with Madman Entertainment's master discs, as Manga have directly used their source material for this UK release. Although this issue is present it does not remove any content from the disc and the episodes are viewable if the minor discoloration is ignored, while the issue is entirely absent on this release's second DVD.

My verdict and opinion of Dance in the Vampire Bund is confused at best. I personally found the stories convoluted and hard to follow, but I enjoyed the characters. It was this enjoyment which kept me interested after the first four episodes and which allowed me to continue to the end, even in spite of the sometimes ridiculous turns of events. The one aspect of the series which I expected to bother me, the reliance of this series of under-aged fan service (primarily thanks to the show's reputation), didn’t distract me when it was present; the nudity was actually extremely subtle, and unlike many other series I have watched recently the nudity actually had a point. However, I did very much enjoy seeing Mina’s true form... very lovely, and this more than makes up for any questionable content. If you are sitting on the sidelines, Dance in the Vampire Bund is worth a dive - you never know, you might just like it.

7
When a beautiful girl asks you to dance with her in the darkness, you do not want to disappoint.