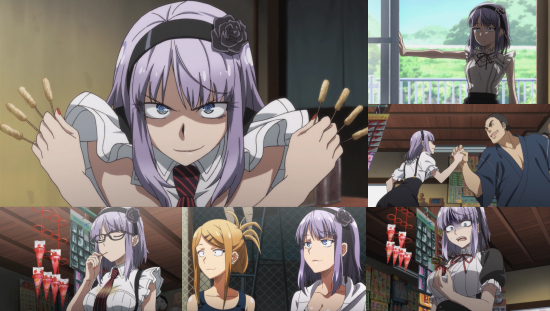 Childhood is a time of simple pleasures, none more so than the delightful (and frequent) opportunities to snack on sweets and chocolates without the worries of health and diets getting in the way. With those delights also comes a plethora of nostalgic memories of childhood - for example, in my case it's hard to separate recollections of stopping off for snacks at a nearby shop on a Saturday afternoon with trips to watch football with friends, and the inevitable realisation that your best buddy has bought something far more delicious than you that they're unlikely to share.

Dagashi Kashi is, effectively, this exact sense of nostalgia writ large. Every single episode focuses in on just some of the ridiculous cornucopia of snacks produced and sold in Japan, often with their own unique trait or gimmick that marks them out as something special, and clearly aimed at those who have fond memories of these snacks from their own childhoods.

There is a story to power this shonen manga adaptation however, although it's as wafer-thin as... well, a wafer. Kokonotsu (known rather wonderfully as Coconuts to his friends) lives in a sleepy town in the country where his father runs a shop selling "dagashi", a term referring to cheap, affordable sweets and snacks aimed at children. While Yo is sure that someday his son will inherit the store, Kokonotsu for his part is more interested in following his own dream career of becoming a manga artist. Funny how so many manga are about prospective manga artists, isn't it?

Any dreams Kokonotsu might have are about to be obscured further however by the arrival in town of Hotaru, an odd but engaging girl who has not only an encyclopaedic knowledge of "dagashi" but also a very specific mission - to lure Yo away to join her family run snack company, which in turn means that she needs to push Kokonotsu towards his destiny of inheriting his father's store. In turn, Hotaru's presence brings about something of a love triangle, as our protagonist's classmate Saya sees her as a new rival for Kokonotsu's affections.

If there's one thing to be said about Dagashi Kashi, it's that it has real spirit - the show goes to great lengths to wax lyrical about the wonders of its chosen subject matter, and often chooses unusual or even surreal ways of relating those wonders to the audience as part of its narrative. Each instalment can be broken down into multiple segments, which broadly boil down into Hotaru running excitedly to Kokonotsu to talk about a particular snack or test his knowledge on them, which in turn feeds into a mix of comedy and nostalgia revolving around the snack under the spotlight and whatever wacky goings-on accompany it.

All of this is good and well, but for the majority of the show's western audience we're missing one major piece of the puzzle - the series is trying to evoke a nostalgia that we can never had. Unless you've ever eaten these snacks for yourself, and perhaps more importantly unless they can invoke memories of your own youth, the entire experience is an empty one. For all of the energy the cast put into the subject at hand, without the taste of the snacks or the life experiences associated with them, they might as well be talking about their favourite GSM weight of printer paper.

This is a major issue because there isn't much to the show beyond this - Hotaru and Kokonotsu are both defined by their knowledge of snacks and have little to show aside from that (beyond an appealing character design in Hotaru's case), and even Saya's main characterisation is bare beyond her romantic interest in the protagonist and the shocking fact that she isn't a major snack fiend. Shorn of nostalgia and characters worth talking about, all you're left with is some suggestive setups in the name of low-key titillation and some moments of inventive visual direction to keep your interest piqued. Is it enough? Not even close.

Then again, maybe the characters would be more visually appealing at least if they weren't all constantly boss-eyed - the result of too many sugary snacks, perhaps? In fairness, this is a holdover from the show's source material, but it still looks decidedly weird and stands out in a series where little else does. Three episodes in, we finally got a proper, completed set of opening and ending credits which are both kind of nice (I'm a fan of the closing credit sequence in particular), but again we're scraping the bottom of the barrel just to find more positive things to say.

It's easy to see the appeal of Dagashi Kashi from an outside perspective - it's a series steeped in nostalgia for those of a certain time and place with the experiences of their youth to match, and I'm not going to question the validity of that or how it's presented here. Unfortunately for a western audience however, the absence of this nostalgia leaves us with no real hook into the series - its characters are dull, its romance and broader set-up are severely lacking, and a layer of visual panache over aspects of its celebration of Japanese snacks aren't engaging enough to dodge that personal requirement to complement it.

In short then, it may have its merits for a specific audience, but Dagashi Kashi isn't a show for us, nor is it meant to be.

You can currently view Dagashi Kashi in streaming form on Animax UK and DAISUKI.

5
Dagashi Kashi is a series steeped in a nostalgia most of us can never have - stripped of that, it's utterly unremarkable.
COMMENT AND DISCUSS
blog comments powered by Disqus