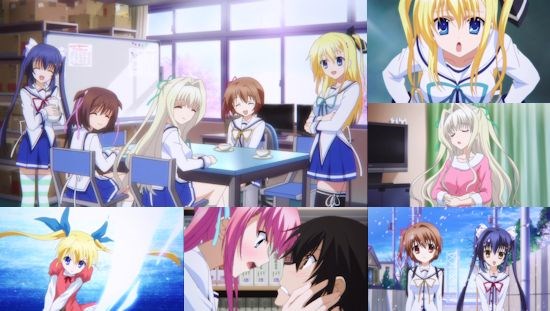 The visual novel adaptation can be a rocky road for anime producers - for every Clannad or Steins;Gate there's a Shuffle or... well, even more forgettable fare that I can't even think of right now.  In terms of popularity, the Da Capo franchise is perhaps one of the better known series of novels, but can it translate that popularity to the small screen for this streaming adaptation of Da Capo III?

While some series take their time introducing their various characters, Da Capo III largely eschews such luxuries in favour of throwing its main cast at you from the outset.  In short our protagonist for this series is one Kiyotaka Yoshino, the only male member in what is otherwise an all-female membership of his school's Newspaper Club.  Needless to say, all of the other members of this club slot nicely into typical character tropes, from your "little sister" who isn't actually blood-related through to an energetic childhood friend via a number of other distinctive but not all that memorable individuals.

The real hook for the series comes from its location - Hatsune Island, the setting of the previous Da Capo games, and the home of a rather unique cherry blossom tree.  Rather, it used to be unique, as a tree that was renowned for blossoming constantly without cessation - an occurrence that is now little more than a legend as it's something that hasn't occurred for a couple of decades.  Still, despite being effectively dead to all intents and purposes, the rumours surrounding the tree persist - namely that it's capable of granting wishes.

With a long-running rivalry between the official and unofficial newspaper clubs still very much in play, the official club president Ricca decides that a special on magic is the way for them to engage their readers, and what better centrepiece for such a publication than an investigation into the island's infamous tree?  This idea is sent into overdrive as the tree in question suddenly springs into blossom for the first time in decades, but was the newspaper club somehow responsible for this?  More importantly, who is this mysterious and childlike girl who seems to have appeared on the island in the wake of it springing back to life?

If you've played the first Da Capo game (available in English from MangaGamer, incidentally) then you'll know the answer to that previous question straight away, which leaves me a little unsure as to whether knowledge of the previous Da Capo titles (or their anime adaptations) is actually a help or a hindrance here - some of the mystery is removed by knowledge of what has gone previously in the franchise, but then again maybe that knowledge is important in the grand scheme of things?

Not that the magical mystery at the centre of the series is really where the focus lays for these early episodes of Da Capo III - instead (and perhaps predictably) introducing the main characters is quickly followed by watching all of the female members of the newspaper club simper over Kiyotaka and not-so subtly hint towards their varying degrees of love for him.  Of course, our protagonist is too stupid to actually notice any of this attention, even when girls are clambering into bed with him or moaning his name in their sleep - admittedly, Kiyotaka has more personality than your average milquetoast male harem lead, but not by much.

It's this which is really Da Capo III's biggest problem - it manages to juggle its fan service quite well against its other content, but let's not pretend that this is a magnum opus of story-telling; at this point, it's just another harem show, albeit with some colourful and actually rather pretty visuals in places and what could be some darker story-telling at the heart of its mystery.  Although the future potential for the series is there, that doesn't excuse the fact that the core content of the show thus far has been entirely predictable - an unspectacular male lead cluelessly wandering around in a sea of girls who want nothing more than to throw themselves at him.

If such stories are your thing, then Da Capo III is pretty enough and with enough varied characters to keep your interest, and if you're a fan of the visual novel franchise then this is most likely a decent way to get up to speed with its third instalment.  In the wider sphere of currently airing anime however, this is one of the more forgettable shows of the winter - neither terrible nor wonderful.

You can currently watch Da Capo III in streaming form via Crunchyroll.

5
Some interesting magical and supernatural elements are given short shrift in favour of predictable harem love interests.
LATEST REVIEWS