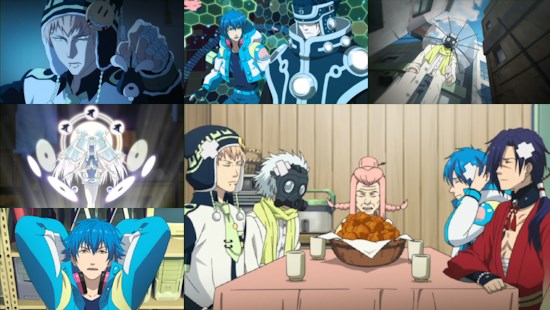 Platinum Jail - a not at all worryingly-named utopia, which gleams and glitters as a beacon to the wealthy. It's all a far cry from the life of Aoba Seragaki, who works in the just as aptly named Junk Shop Mediocrity as a surprisingly successful seller of whatever bric-a-brac comes his way.

Despite his rather eye-catching choice of garb, Aoba seems to fit well into this futuristic world's downtrodden residential district, with a growing number of unusual friends and associates around him, a close friendship with his mechanical talking pet, and a fractious but generally good-natured relationship with his grandmother. Something isn't quite right with this picture however - others seem to have an impression of Aoba which doesn't mesh with his own memories, particularly as it pertains to a kind of augmented reality fighting game named Rhyme, which has become the new home of the gang warfare which riddles the town. Aoba doesn't seem to be a young man with something behind, and as the story reveals itself Aoba is forced to face a past he never knew existed, and the need to fight for a future in ways he never realised he was capable of.

Based on a Boys' Love visual novel, DRAMAtical Murder sets itself up as a kind-of "Bishie Blade Runner", where the lines between humanity and robots are blurred, as are the lines between the physical and virtual worlds. Although hardly original in its conceit, the series builds up an interesting world with little effort before filling it with characters packed with striking (and sometimes downright ludicrous) character designs and personality quirks that certainly leaves you wanting to know more about each and every one.

After the bright start that introduces us to the world, the series does begin to meander a bit - it's clearly trying to build up the mystery of Aoba's past and dig a little deeper into some of its characters, but more often than not feels like it's spinning its wheels before someone finally lets go of the handbrake and allows the show to catapult forward into where it really wants to go.

The main thrust of the story surrounds Platinum Jail and a nefarious plan underway within it of which Aoba's a pivotal component, but in a way this all ends up feeling like a means to an end, that being an excuse for Aoba to delve deep into the back stories of the rest of the cast. Aoba's interactions with each of the group that follows him on his journey to Platinum Jail are a mixed bag, presented almost as discrete arcs within the wider narrative of the show - each one grants us access to that character's past, but not in a suitably comprehensive enough fashion to make most of them really resonate. The problem here is that these stories are largely obsessed with exploring the moment of a character's fall from grace - usually a pivotal event in which their life was turned upside-down - but never find the time to give us much context of what their lives were like before that point to allow us to empathise or feel anything for their plight. While some of these tales find enough of a grounding in the present to make the story work and bring some satisfying closure - the gas mask-wearing Clear is the stand-out in these terms - others feel like you've been served your dessert before the main course of the meal was ready.

Although some of these stories fall a little flat, there's still enough to DRAMAtical Murder's world and overarching plot to at least be entertaining, and the other elements of its presentation certainly help it along the way. Yes, some of its character designs are rather bonkers but they're undoubtedly appealing to boot, and although the show struggles to make its occasional action scenes pop it's more than proficient enough in detailing its world the rest of the time. The real standout of the show's presentation is its soundtrack, with a slate of terrific opening and closing themes and a background music soundtrack that is both enjoyable and fits the series like a glove.

The series does also provide an English dub, but to be honest the less said about that the better - its flat, disinterested and clumsy voice performances are downright atrocious and best avoided unless you really don't want to watch the English subtitled presentation, which is a far better way to enjoy this particular series. We only received the DVD aspect of this DVD/Blu-ray combo release for review but it proved to be mostly satisfactory, although the bit-rate of DVD did struggle in one or two places when visually busy scenes inside the world of Rhyme turned up.

I do also have to take a brief pause to mention that this release also ships with the show's OVA, which a curious beast indeed given that it's a single episode collection all of the "bad endings" from the original visual novel in animated form. If you want to see the protagonist get raped and/or killed over and over and over again, this is the episode for you, as one of the most relentlessly intense anime experiences you're ever likely to see. Aoba gets killed... then again... then he suffers death by blowjob... then he gets killed... then he gets raped while a lion watches... then killed again. I've never seen anything quite like it.

Setting that aside as a fascinating curio though, DRAMAtical Murder isn't likely to set the world alight or leap to the top of anyone's list of favourite anime, but is does offer a competent narrative within an appealing world, aided by a solid presentation. There can be no doubt that the show lifts a lot of its ideas from other, more compelling, stories - there are elements of everything from Durarara onwards - but it handles everything it brings together well enough to make it at least worth considering a look. If nothing else, it feels more ambitious and smarter than a lot of other similar fare within its particular genre, so as something a little different for Boys' Love fans it may also find a suitable place in your collection.

6
It doesn't always find breathing room to fully explore its world and characters, but this is nonetheless a reasonably entertaining and well-presented series that works beyond its Boys' Love origins.
LATEST REVIEWS