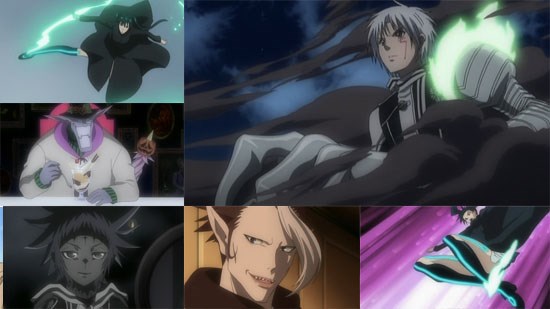 It's no secret that I’ve been less than impressed with the D.Gray-Man anime. Maybe I’ve put it on a high pedestal because of the manga, but it can be argued that a series with so much potential on offer has been wasting it. We’re approaching the end of the first half of the series with this DVD set, so has the show managed to break the curse it seems to be under?

Allen and Lenalee manage to reunite with Lavi and Krory on their search of the allusive General Cross. Lavi updates the pair on the situation and the Order’s encounter with a Noah as the group stays in a nearby town during the rose festival, while someone watches the group from afar.

So, here we are approaching the end of the first half of the series. For a good half of the series, particularly the last set of discs, the show has been milling around trying to find a direction to go in. It seems that by hitting the fiftieth episode we actually get an insight into the issue with the series and that is its length. At the time when the series was being produced, the manga had only just reached double figures in its volume length. Getting a hundred episodes out of that much story content was always going to be a struggle and this is why I think D.Gray-Man has been falling down. Too many episodes to fit in with original content is going to take its toll and even at this early stage it has not been doing it any favours.

But enough of my theories, what is there to actually say about this new set of discs? To use an overly used football analogy, it is certainly a game of two halves. The first disc contains the uninspired episodes we have been encountering for a while where the cast mill around while Allen tries to get his head on straight followed by the group splitting up again in new pairs and separate stories. So far, so dull. It is actually the second DVD where things begin to beef up as the Noah known as Lulubell starts to take a more active role against the group. The final set of episodes spice up the action nicely with somewhat decent fights and a feel of menace behind this new enemy, injecting some much needed life into the series.

These DVDs round off with a setup for the next season, which is actually making me excited to see what happens next. This is the first time the series has actually managed to get me to look forward to the next series of DVDs. The fact that it has managed to do this where in prrvious discs it struggled to get me even a little excited shows that the potential of the series is slowly making its way back to the foreground.

As for everything else, it is all pretty standard. The character design is what we have come to expect, with the Akuma sporting some more interesting and varied designs over the other characters in the series. While animation is also what we come to expect from D.Gray-Man, it's functional but not exactly mind-blowing.

While I have been berating D.Gray-Man left right and centre, it is more down to frustration at the series slow pace and at times damn awful script. A glimmer of hope has finally shone through as the end of this collection of episodes comes. We can only hope they keep on polishing it until the entire series beings to shine.

The standard extras with dual-languages, audio commentary and clean opening and closing songs.

7
A slow start gives rise to a promising end, with hopes that it will continue into the next release.
LATEST REVIEWS