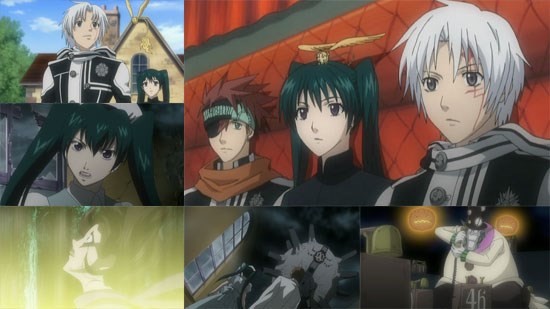 I’ve not been able to hide my disappointment with the D.Gray-Man anime series. Being a huge fan of the manga in its early days, I was more than happy to see the series be brought to life. Unfortunately the first series has left me more than a little jaded. Will series two finally be able to bring the series back up to scratch?

The Earl has kick started the next chapter in his plan for both the Akuma and the planet, beginning with the death of a very high-ranking exorcist by a pair of the Earl’s allies, the Noah Clan. The Black Order begins to scramble to counter this new threat by locating and protecting the exorcist Generals. Allen’s team is assigned to find the womanising General Cross, but it isn’t going to be easy to find a man who has been missing for four years.

So... a new series means a fresh start, surely that’s what we need here? We can go head long into a new set of stories, everyone is established and we can get into the nice juicy action that we’ve been craving for, right? Well, no. In fact it’s a hell no. In fact it's a no of the highest degree. You see, dear reader, for a series that actually does have plenty of material to work from we have filler. Not just any amount of filler either; we have an entire release of filler. There are maybe about two episodes that advance the plot to any real degree, and even then that isn’t for the entire duration of those episodes. What the hell is happening? Any possibility for some resurgence in the series has been pretty much been beaten to the ground and had a Dragon Ball Z style giant energy ball thrown at it to blast it into the next life.

If this was your average boys fighting anime like Naruto or Bleach, I would expect it. But look at the source material for this portion of the anime and you’ve got well rounded characters, an exciting premise with a situation that seems desperate with the end rushing forward. So why the hell are we watching Krory learn the meaning of being an Exorcist? Why is Kanda investigating villages like some sort of Scooby Doo reject? Why the hell are Allen and Lenalee investigating conspiracies in a freakin’ hospital? Most of the stories that happen in this set of discs feel more like Saturday morning cartoon territory rather than exploring the facts and theories of life and death and the ways people deal with grief. The series had a very strong start and it had so much to work with to build it up, which is what annoys me the most about this downturn in quality. D.Gray-Man has such potential with a premise, characters and villains that ooze charm and yet we get given throw-away episodes that seem to have been fished out of Bleach’s rejected story bin.

It kills me to have to write this, but this anime does nothing to the D.Gray-Man brand at all. At worst it even damages it to the point of warning people off of the other material that the series has to offer. How the anime creators have managed to get this past the creators of D.Gray-Man is beyond me, but this is what we are left with; a husk of a series that has nothing to fill it, no weight, no nothing, just a paper-thin skin that crumbles at the slightest thought of quality. I was excited upon hearing about the D.Gray-Man series being made into an anime, and again when it was released on DVD. I wish they hadn't bothered now.

Japanese and English dubs along with clean opening and closing songs. Nothing major at all.

4
Few redeeming features make this a hard recommendation, even to fans of the franchise.
LATEST REVIEWS