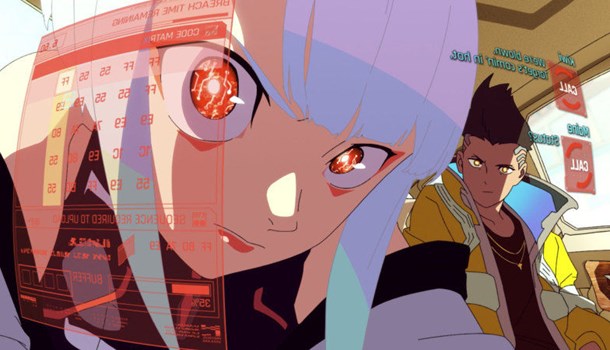 Unlike my other recent Netflix anime review, which covered the disappointing Bastard! series, Cyberpunk Edgerunners didn't just live up to the initial promise shown in the first episode (which I covered on my blog here) but massively exceeds it.

Studio Trigger has managed to create a series that may not stylistically represent the CD Projekt Red 2077 game, but spiritually carries all the hardcore futuristic action over into animated territory with real aplomb.

The 10 episode standalone story features David, an orphaned street rat who, prior to the death of his mother, lives on the fringes of civilised society by attending an elite school thanks to her countless hours working for the emergency services. Alone and adrift, he eventually joins a gang after he realises that a military-grade implant he discovered and installed was originally meant for the gang's leader, Maine.

The animation is utterly absorbing, thanks to some very creative stylistic choices and some fabulous direction choices by the directorial team of Hiroyuki Imaishi, Masahiko Otsuka and Hiromi Wakabayashi. Episode 4 in particular opens on a wonderful slow-motion lightshow and then rewinds time to show how this moment is pivotal to the direction of the story. I'm genuinely in awe at just how good this looks for television as well as the sheer brutality on show. Won't someone please grant Trigger the license for a Battle Angel Alita anime?

Yoh Yoshinori similarly brings his A-game to the character designs, which are incredibly varied. From long-limbed cyborgs to loli-gunnners, it's a real tour-de-force in marrying theme and aesthetic. You know it must be good when twitter loses its mind over Rebecca's character design (the younger sister of one of the gang members) who's a real stand out for the cute-but-deadly brigade of anime girls with attitude.

Despite the harshness of the world and the rather epic violence on display, the series is smart enough to take a few beats to properly establish our characters. True, by now many of them are archetypes, but those exist for a reason and here they aren't just shorthand - you genuinely feel for David as he matures from brat to badass. Lucy's melancholy is explored, Maine's past has resonance and a reason for his role as a "big brother" to David, while the rest of the gang enjoy enough of a spotlight in the limited time we have with them to feel like a believable family unit in a much larger world.

It's also very clear that there's a real love for the genre here. Japan is no stranger to Cyberpunk, a genre it generally excels in, but the city and lore that grounds it also has a great deal of affection poured into it, and we can only thank CD Projeckt Red for that. The underlying world of Cyberpunk 2077 is the perfect platform for this story, and could easily spawn more standalone stories should the publisher decide that this is an effective marketing tool. By all accounts, the series has boosted sales by a considerable margin, so that's really not beyond the realms of possibility.

Rarely have I seen an anime that keeps up the breathless pace for 10 episodes straight while maintaining such a tight and interesting story. It shares a genealogy with the likes of Bubblegum Crisis, Armitage III and the aforementioned Alita, while crafting an almost perfect narrative to rival the first season of Netflix's Daredevil season 1 or Amazon's The Expanse. Dark, gritty and achingly stylish, Cyberpunk Edgerunners may actually be better than the game it's based on, and that's a feat that is rarely - if ever - accomplished.

If you want to learn more about the terminology and lore of the show, the official Cyberpunk Edgerunners website is a great way to immerse yourself further.

9
An instant classic of the genre