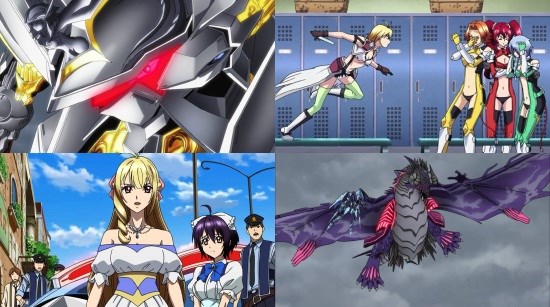 The last year or so has been a bit of a dark time for mecha fans - Gundam has failed to impress with the hodge-podge Reconguista in G, Captain Earth never really took off and whilst Aldnoah Zero provided great action it coupled it with laughably bad character work. Even my beloved Daimidaler couldn’t quite be called a resounding success for the genre, even with the combined powers of penguins and boobs! Thank goodness then that Sunrise are keen for us to forget that they haven’t exactly thrilled us with their latest Gundam offerings and have come to the rescue with Cross Ange: Rondo of Angels and Dragons. Like Valvrave before it, it's had a bit of a rocky start over its first couple of episodes, but with half the season comfortably under its belt will Cross Ange continue to follow Valvrave and turn an uneven beginning into an awesome and gripping ending.

The population of the world is divided. Whilst the majority enjoy a happy life in a society driven as much by magic as by technology, a minority of girls are born who only just lack the ability to use magic, but actively disrupt it and negate its effects. The general populace hate and fear these so-called "Norma", who are captured and sent away upon discovery. Unknown to most, and as Princess of the Mitsurugi Empire Angelise is about to discover, the Norma are all being sent to a military installation on a remote island and are forced to work in a fight against colossal invading inter-dimensional dragons if they want to keep on living. Plunged into this horrific world of life and death. Angelise must learn to throw away the manners, principles and niceties of the society she has been brought up with if she is to have any hope of survival.

If there’s a single word to describe Cross Ange it would be ‘inconsistent’. The story starts off as a pretty dark sci-fi tale, but the creators couldn’t quite seem satisfied with that genre so every now and then you’ll get an episode with recurring character Tusk and suddenly find yourself watching a really sub-par episode of a typical harem show playing the "how many times can face meet crotch" game, or the dark part of the series will just vanish and the formerly dangerous battles will become just the backdrop to an episode about taking a bath before the series remembers it wants to be dark and gripping and the cycle starts all over again. The segments featuring Tusk are far and away the worst offenders here, as the character adds nothing to the story for the most part other than to have a male character on the side of our ‘heroines’, and frankly any action he undertakes just feels like someone else could have accomplished it without him in a more interesting and dynamic way. In a series that sets itself in an all-female environment with a very strong "yuri" vibe he fits in even less, and throwing a male character in every so often to grope his way through the cast is frankly just stupid and insulting - it's as if the creators thought that the traditionally male audience for a mecha series wouldn’t watch without a male character. This is somewhat amplified both by the fact that Sunrise’s main mecha work comes from Gundam, which as a franchise has a pretty bad record with female characters, and by the fact that getting a big sci-fi mecha series where the main character can be a female mecha pilot is actually pretty rare in anime so the cheap gags feel like a lack of confidence in the core concepts of the show.

Elsewhere however, the series actually works pretty well. The overall idea may be a little predictable but there are a sufficient number of twists and turns to keep you engaged, even if you have to look past a couple of plot holes the series would rather you didn’t pay attention to. In addition, this is of course an action show from Sunrise who are amongst the best in the business for this kind of show, and whilst director Yoshiharu Ashino has only headed up a few minor series before he has a huge amount of experience in key animation (I’ve been watching a lot of Shirobako and its rubbing off a bit) and he’s clearly bringing this to the table to make sure the action is as fast-paced and dynamic as possible. Whilst a lot of the characters can be a bit one-note, within the bounds of the series they do work well and a few of them such as the initially meek Chris have some good development and interesting arcs behind them to make sure you’re sufficiently invested by the time the climax of the show's first half rolls around.

The styling of the mecha in the series is definitely worth pointing out -it’s really great as they fluidly shift between traditional giant robots to an alternate form that looks like the pilots are straddling the cockpit of a fighter jet. Ange's mech, the Vilkiss, in particular looks fantastic with its silver colouring and angelic figurehead - it’s practically a Rolls Royce mech! The character designs are of Sunrise’s usual good standard, though few of them stand out too much. One big visual aspect of this series that does stand out though is the fan service - not because of what is there but of what there oddly isn't enough of. This is not to say that there’s no fan service here because, well, there is. Quite a lot of it in fact. It’s also not because they’ve "done a Terraformars" and splashed black paint around everywhere with the now common  "uncensored on Blu-ray" idea, because there’s practically nothing across these first thirteen episodes that looks like its set to be uncensored  Rather, the fan service stands out because of the relative restraint that’s going on - this is a series that could have a heck of a lot of more explicit nudity, but the show has gone down a different path and relies on more traditional fan service using teasing glimpses and camera angles that almost but don’t quite show everything, which is certainly an unusual move in this day and age. I also do have to give them some credit for a now infamous scene in the first episode which could well have set me on another rant a la Berserk's third movie, but instead is more restrained and makes sure that an extremely horrible and unpleasant act isn’t shot in any way that makes it erotic (and rightly so).

Cross Ange is never going to become a classic series - it makes far too many mis-steps for that - but it is highly entertaining, and given the poor state of the genre over the past year it’s nice to have something worth watching. With the series heading into the second act on the back of a couple of unusual twists I’m certainly more than happy to keep tuning in to see what’s next. If your mecha itch needs scratching you could certainly do much worse.

You can watch Cross Ange: Rondo of Angels and Dragons in streaming form on Viewster

7
Solid mecha action that almost makes the step from good to great.