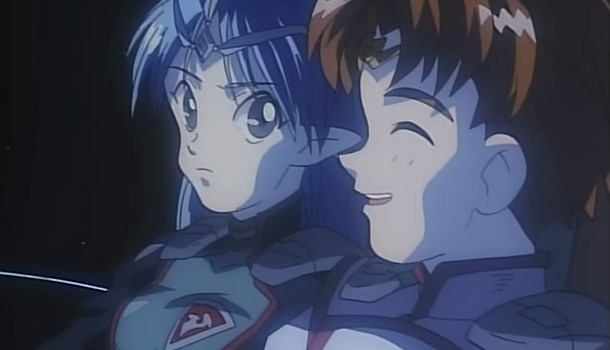 The last volume of this series couldn’t have been more misleading.

Regular readers may recall that, whilst I enjoyed the lovely visuals and intelligent Sci Fi of the first volume, it was something of a sedate affair. Volume 2 is anything but.

The first of four episodes opens with an attack on Abh cruiser the Gosroth – its fraught, desperate and utterly absorbing. I’ve not been this invested in a fight scene since Priss kicked Largo’s butt in BubbleGum Crisis volume 6, and that’s really saying something. With both Lafiel and Jinto safe onboard a shuttle and heading for a nearby star system, the battle runs the entirety of the episode, and the direction is simply superb. The human (or rather, Abh) drama of the situation is utterly engaging and ultimately devastating.

The following 3 episodes once again focus on the Royal couple, as they seek sanctuary within the Febdash territory, a small and insignificant sector of Abh empire. However, over the next 3 episodes an insular conspiracy sees the couple separated and fighting for their lives.

The series has managed to pull off quite a neat trick. By establishing its own Universe in such detail in volume 1, this subsequent volume feels weightier and more dramatic as a consequence. I guess it’s like watching the Borg attack at the end of season 3 of Star Trek – everything makes sense in context and the alien terms and names seem second nature, as the action whisks you from one crisis to the next. Everything seems that little more "real".

The only risk to this strategy is that those people a little under whelmed by the slow burning nature of volume 1 may not have picked this up – if you’re one of this select group, invest in volume 2 and you won’t be disappointed. With Gundam Seed levels of angst beginning to build, this is highly entertaining and engaging drama. (My word, I'm making an awful lot of comparisons with this reiew!)

Extras are a little on the light side, but the usual trailers, character profiles and language options are in situ. One thing that grates a little here is that the translations are so slapdash - the subtitles in the show translate the area entered in episode 6 as "Febdash", whereas the character profiles spell it "Feibdach". This on top of numerous spelling mistakes make the extras appear rushed and as such it's sloppy and disappointing, but not the end of the world. As an aside, watch the show in the original Japanese, its all the better for it.

Overall, despite the flawed extras, this is a great set of episodes full of action, adventure and heart-rending pathos, perfect for anyone who likes some intelligent sci-fi with enough explosions to keep things moving.
8
excellent episodes marred by some flawed extras and spelling issues, but these are minor faults in what is shaping up to be a great series.