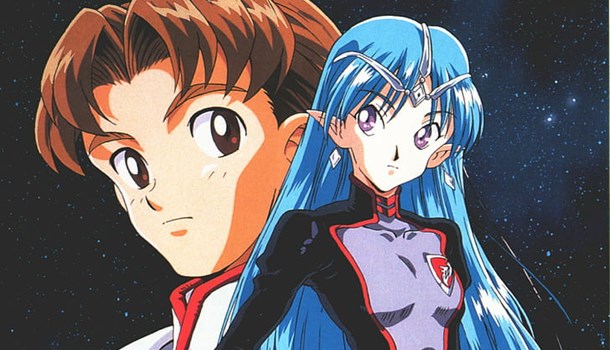 I’ve been looking forward to Crest of the Stars. Old enough to be described as a classic, and with production values that ensure it looks good even today, the series boasts some beautiful character design and an impressive pedigree, based as it is on the Science Fiction novels of Hiroyuki Morioka.

The series starts with an alien invasion. Young Jinto’s homeworld is attacked by a space-faring race called the Abh, a beautiful people with distinctly elvish features and the largest empire in the Galaxy. Unable to resist the power of the Abh fleet (not that there’s much resistance) the world falls. Jinto’s father happens to be the president, and in exchange for a peaceful handover, he gains royal status for himself and his family. Subsequently Jinto becomes a prince, and is sent to learn the ways of the Abh.

Once Jinto turns 17, he is sent to the Gosforth, an Abh battle cruiser. Here, he meets a young girl named Lafiel, and the two become friends, just as a war develops between the United Humanity and the Abh empire.

Perhaps the most striking aspect of this anime (after the lush visuals) is just how mind-bendingly awful the dub is. Here’s a quick guide on how to judge an anime dub: close your eyes. If the conversation sounds natural and flows well, then the dub is at least convincing. You didn’t need to close your eyes with this one; there is no flow. Conversation is stilted, unnatural, contains bizarre mid-sentence pauses and is often nonsensical, which means the script makes no sense in places either.

Luckily the Japanese soundtrack is readily available, and I’d recommend that you watch the anime in this format if you want to get the most from it. In fact, watching the series subbed is the only way to watch it, because with the introduction of each character their name is flashed at the bottom of the screen, and without subtitles, there is no translation. Apart from being infuriating, it makes the series very confusing.

The story itself is a slow-burning character driven piece. The first volume is content to introduce us to the ways of the Abh, and as such it’s low on action and big on talking. If this is your bag then Crest of the Stars will indulge your intellectual tastes, but fans of action series will find that anime such as Gundam is better equipped to satisfy their need for deep space pyrotechnics.

My own views changed over time. By the fourth episode, I was actively interested in the world of the Abh and their way of life, but I wasn’t enraptured by it. Lafiel is an intelligent and strong female lead, with Jinto firmly grounded as a traditional anime male – pleasant, intelligent, but not exactly forceful. It does have a whiff of familiarity about it, but promise of more action packed episodes may help to quicken the pace and provide a more exciting context.
7
It’s like watching Star Trek based purely on Vulcans. Not to everyone’s taste, but shows some promise.