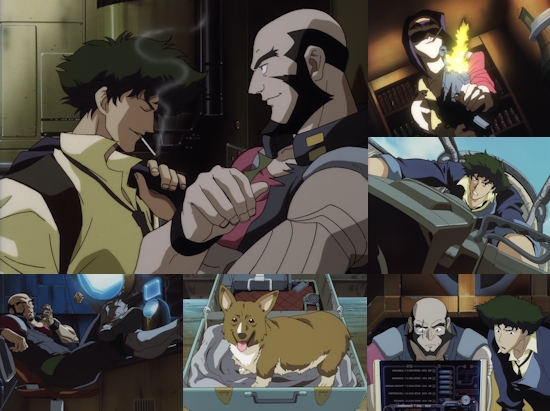 There really aren't many television anime series you can mention in the company of non-anime fans and expect to elicit any response other than a baffled "what?" from, but Cowboy Bebop is likely to be one of the few shows you could hope to receive at least a nod of recognition upon a mention of its name in polite conversation. While "mainstream appeal" can sometimes be read to mean "populist pandering", this really isn't the case with Shinichiro Watanabe's highly regarded classic - it's hard to believe this was a show that few even within production studio Sunrise had any real faith in as work started on the series.

Now, after a period stuck drifting in limbo after the demise of Beez Entertainment (and parent Bandai Entertainment's retreat from the western anime market), Cowboy Bebop returns to the UK - and how! With the promise of a High Definition remaster and a slick and colourful package from newcomers to the UK anime distribution scene Anime Limited, you'd be hard-pressed to find a more exciting debut release.

Let's not get ahead of ourselves however, and start by talking about the first half of the series itself. For those who are unaware, Cowboy Bebop begins as the story of two bounty hunters - Spike and Jet - as they seek to make ends meet in this grimy space-age future by bouncing around the galaxy picking up various criminals and collecting the rewards on said criminals heads for doing so. At least, that's the plan, but for all of the skills exhibited by this duo it seems that more often than not something will crop up to deny them their pay-day. What the crew does seem to be rather capable at however is in increasing in size, and as this first half of the series progresses Jet and Spike find themselves joined by a compulsive gambler of a femme fatale, a rather unique dog and a child prodigy hacker.

All of this takes place in a largely episodic framework, allowing each instalment to breath as a story in its own right as it jumps from madcap action comedy to more considered fare, and occasionally slowing its pace right down to get right under the skin of Jet and (in particular) Spike as we begin to piece together fragments of their lives and how this has led up to their current place in the universe on the outskirts of its society.

Episodic shows often struggle to pack the same punch as series which lean more heavily on an over-arching narrative, but this first half of Cowboy Bebop doesn't so much serve as the exception that proves the rule as the exception that spits in the face of the rule, points a finger at it and laughs heartily. Almost entirely without fail, the episodes on these two discs hit the mark with unerring accuracy - here is a series that can do goofy comedy without feeling too ridiculous or pay homage to other aspects of pop culture without feeling arbitrary while also providing episodes filled with melancholy, heartfelt emotion or ennui that doesn't rely upon having to force its emotional payload upon the viewer. It's rare to find a show that you can dip in and out of easily and still feel entirely invested in its cast (particularly by the final episode of this set), but somehow Cowboy Bebop succeeds in spades with its perfectly brewed blend of elements.

Of course, we're probably preaching to the converted here, and what you really want to know is - how does Cowboy Bebop look on Blu-Ray? Thankfully, the answer to this is a simple one - it looks stunning. While we've always been aware that Cowboy Bebop is a well-animated series, it's hard to appreciate just how fantastic it looks until you see it in High Definition, where you can really marvel at the show's attention to detail right down to its colour palettes and the tremendous effort that has clearly gone into building its universe and locations. The only area where this High Definition treatment doesn't benefit the series is in scenes where CG is used heavily - as these assets were never created to be seen in such resolutions any CG models look heavily aliased, but thankfully such moments are usually brief and few and far between for the most part. Taken as a whole, this is an almost uniformly beautiful release that stands head, shoulders and a pair of stilts above any previous DVD version of the series.

This first half of the series also impresses in terms of its audio, with both English and Japanese soundtracks delivered via a subtle yet strong (and altogether louder in the case of the English language track for some reason) 5.1 mix that uses the rear channels sparingly yet effectively. The dub versus subtitle is also almost entirely moot here, as both options are delivered tremendously via a perfectly pitched cast - if you do pick the Japanese language option, all subtitles are present, correct and virtually free of errors.

In fact, our only gripe with this release from Anime Limited (and we have to have something to complain about, right?) is with its use of in-episode chapters markers - or rather, the lack of them for the most part. If you want to skip the opening or ending credits then forget it, as the only chapter point for each episode is the half-way point of the episode, so even if you want to skip the ending theme to the next episode preview (or the next episode for that matter) you simply can't. Admittedly there are worse problems in the world than watching the opening credits to Cowboy Bebop thirteen times, but it does stretch this reviewer's patience somewhat and goes against what has been the standard behaviour in terms of chapter configuration for decades now.

Putting that matter aside, the discs themselves come in an amusingly-rendered VHS-style inner packaging within that colourful exterior, accompanied by a fetching little booklet of character art that serves as a nice little extra in an era where we're shocked to find anything at all other than the discs inside their case. Extras on the discs themselves are in line with previous DVD releases, including some entertaining commentary tracks and music videos, the latter of which serves to highlight the massive improvement in quality that comes from this High Definition Blu-Ray transfer.

Is there anything to say about Cowboy Bebop that hasn't been said already? We don't want to exhaust our stash of adjectives, so let's keep this simple - this first Blu-Ray release from Anime Limited is a tremendous set of episodes from an absolute classic anime series, delivered in the best audio-visual quality you could possibly ask of it to ensure that its full majesty can be enjoyed and appreciated. If that statement doesn't distil into "buy this right now", then I don't know what does.

9
Cowboy Bebop given the visual treatment it deserves - what's not to like?
COMMENT AND DISCUSS
blog comments powered by Disqus