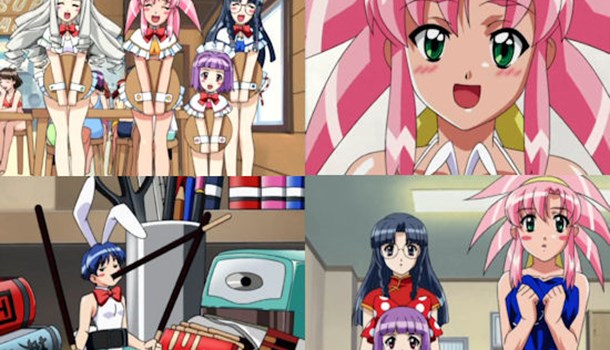 Talk to any dedicated cosplayer and they could doubtless chew your ear off about the sense of satisfaction that comes from creating and showing off a particularly tricky to make outfit, and the trials and tribulations that go into both completing your magnum opus and then bravely wearing it in front of the wider public.  Given all the potential drama and emotion available, it's surprising that there isn't more anime which focuses entirely on cosplay, which brings us to one of the latest additions to streaming web site Crunchyroll courtesy of their deal with Kadokawa Pictures - Cosplay Complex.

Rather than drama however, Cosplay Complex's main aim is comedy as it introduces us to East Oizumi Academy and its rather fledgling after-school cosplay club.  The club's grand aim is to compete in the so-called Cosplay World Series, but before that there are plenty of hurdles to overcome, not least finding the requisite number of members to compete.  Being as they are just one member short this doesn't seem too difficult, but then again given the club's oddball male leader Goro and the frequency with which the club room is destroyed perhaps attracting members isn't as simple a task as it first seems.

If all of that sounds normal enough, think again, as not everything about this series can be classified as even vaguely normal.  Enter Delmo, a fairy who belongs to lead character Chako Hasegawa with the ability to turn into any outfit required at the drop of a hat (or, more likely, at the drop of some cake), and an owl called Ikebukurou who.... well to be honest, I have no idea why he's there.

This sets us up for the twin aims of this show - to throw around as much daft humour as possible, stopping only to suffuse the series with even greater quantities of fan service.  Given its subject matter this isn't too difficult at all, with ample opportunities for its characters to flash their underwear or undress completely while the show also manufactures the opportunity for even more sexual content to flesh (with every pun intended) things out.  How this bevvy of breasts and so on goes down with you depends upon your tolerance to fan service, but it does frequently slide towards the gratuitous.  As for the humour, there are some well-executed gags on show here, which adds a little sheen to an otherwise mediocre production by bringing forth a few laugh out loud moments in the midst of some decidedly average predictable plot points and goings-on.

Come the end of this three episode OVA what you're left with is really a rather forgettable affair, which probably explains why this effort is clearly working towards a broader story that could fill a full series which never emerged.  Its cosplay-centric premise is little more than an excuse for the show's girls to get their kit off, its humour is hit and miss, and to be honest the most enjoyable facet of the series is spotting all of the references to other anime, either via the cosplay efforts on show themselves (which range from Slayers to Martian Successor Nadesico with plenty in-between) or more traditional nods to anime within its humour as Gunbuster and Evangelion get riffed upon.  Still, in this sense Cosplay Complex's three episode running time is also one of its greater strengths - as a very short series it can prove mildly entertaining without running out of steam, and if you fancy a bawdy comedy that doesn't require too much effort to view then this might be just what you're looking for to while away a couple of hours.

5
A few good jokes don't cover up what is ultimately a pretty mediocre OVA.
LATEST REVIEWS