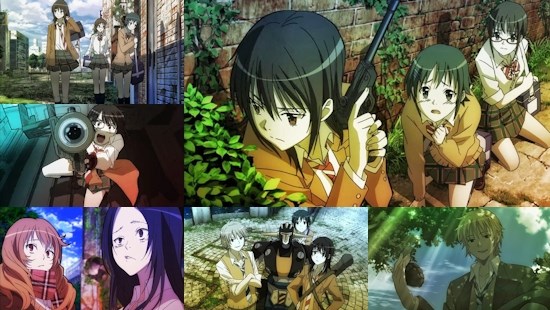 Regardless of the quality of the series, the story of Coppelion's journey from its original manga origins to the small screen is a fascinating story in its own right - all set for its anime adaptation before 2011's earthquake and tsunami, and more specifically the incident at the Fukushima nuclear power plant which alarmed so many around the world, made it an inappropriate choice for airing.

Now, a couple of years later, Coppelion has finally made it to our screens, but with a notable expunging of any direct references to the nuclear disaster which makes up the core of the show's raison d'etre. The result is a little odd to watch, with lots of references to "the disaster" or a need to avoid certain areas because "it's too dangerous" while carefully skirting around the use of words like "nuclear" or "radioactive", even when characters are throwing clearly-labelled barrels of radioactive waste around!

Anyhow, we're getting ahead of ourselves here - as we've already alluded to, Coppelion imagines a future Tokyo that has been left uninhabitable in the wake of a man-made disaster. While many have died and countless others left the area, there are still survivors left behind in the wake of the disaster, either because they refused to leave or because they were simply unable to. Enter the show's titular "Coppelion", a group of genetically modified teenagers who are resistant to the radiation swamping the capital and also capable of sporting various special powers into the bargain. Although intrinsically human in both appearance and outlook, these Coppelion are viewed by many as mere "dolls"; tools to be used as needed then discarded, and with an unknown future beyond the task that they were created for - evacuating the last remnants of humanity from Tokyo and working to make it a safe place to live once again.

We're introduced to this scenario via a trio of Coppelion who head off on a "field trip" to Tokyo with a view towards locating and escorting survivors out of the city - a trio headed by the passionate Ibara Naruse, and backed up by the even-tempered medical expert Taeko Nomura and the decidedly ditzy and loud Aoi Fukasaku. These individuals may have been trained to deal with the perils of this dilapidated, desolate and irradiated city, but no amount of training can prepare them for the human elements they have to deal with once they journey deeper into "the Zone".

In Coppelion's early reckoning, it's this focus on those left behind that dominates the series in a way which is decidedly heavy-handed in its attempts to elicit emotion; something that it nonetheless manages to do here and there. This is particularly notable in the show's second episode, which tries far too hard to setup a sequence of events that will have a psychological toll on Ibara in particular, but in spite of its borderline mishandling of these events it ultimately comes out on top by delivering everything required of its moving climax.

After dealing with various elements of social and political commentary during its early episodes, from nods towards the problems of Japan's ageing populace and beyond, the series exhibits a surprising shift as it moves into its second half - thought-provoking fare is almost entirely shelved in favour of outright action, adding some more rather less-friendly Coppelion to the fray to serve as decidedly dangerous antagonists for the show's latter episodes an a fraught attempt to extract some survivors (including the obligatory pregnant woman) from the city.

Much like its attempts to elicit an emotional response, Coppelion's attempts at action are a mixed bag - some of them are superb albeit decidedly unrealistic, be it a giant mechanical spider or chasing after a stealth fighter in a jeep, while others don't have any real impact or simply fizzle out. The series is arguably more entertaining once it takes this about-face in its goals however, so broadly speaking it is perhaps a step in the right direction, even if it loses the effect of its more thoughtful subject matter in the process.

In visual terms, Coppelion exhibits the same eye-catching look of other recent GoHands productions such as K and Mardock Scramble - lots of saturated colours and post-processing filters which occasionally look a little odd but largely add a certain something to the show's post-apocalyptic outlook, particularly some of its eerily desolate vistas of Tokyo itself. The series also exhibits a lot of thick outlines to further ensure it looks unique, although this particular aspect of the show's style seems to disappear at around the same time as its shift to more action-oriented fare. Elsewhere, the show's soundtrack is fitting and enjoyable in places, and its voice cast all give passionate deliveries - perhaps too much so in Kana Hanazawa's case, turning the already irritating Aoi into a nigh-on unbearable character.

Beyond the interesting tale of its gestation in animated form, Coppelion is a series that manages to do some engaging and eye-catching things, but not with enough frequency to make it easy to recommend as a whole. In that sense, the series is a frustrating case of wasted potential - it can bring the viewer close to tears, or drop their jaw with a slickly executed action set pieces, but these moments are too few and far between while the shift in tone half-way through the show is rather jarring. The result is a largely average one, punctuated only by occasional moments of joy - possibly worth watching just to catch those moments or soak in the unnerving and strange beauty of a deserted, crumbling city, but with little to recommend it beyond that.

Coppelion is available to view on-demand for subscribers to ANIMAX UK.

6
It exhibits a few moments of excellence, but these moments are too few and far between to make for a memorable series.
LATEST REVIEWS