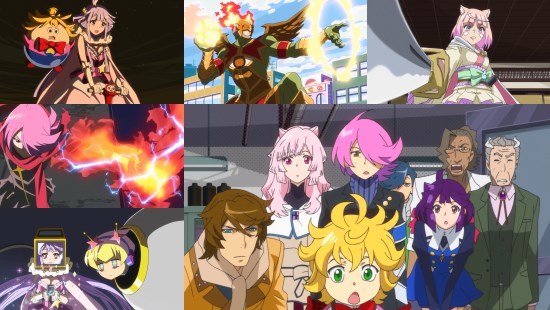 I've been meaning to write about Concrete Revolutio ever since its first season came to a close back at the turn of the year, but the reason that I've put it off for so long is a simple one - to write about this series is a daunting task. Such is the manner in which this series covers both modern Japanese history and popular culture, intermingling and cross-pollinating fact and fiction such that it feels like you probably need a degree to truly dig comprehensively into every element of the series and the story it sets out to tell. Thankfully, even without expert knowledge in the topics at hand, there's still a lot to like about Concrete Revolutio.

For all of that complexity, the core premise of the series is a simple one. We find ourselves on an Earth that is instantly recognisable yet still vastly different from our own, with its own unique calendar and, more importantly, some very unique residents. Concrete Revolutio's world is one where every imaginable superhuman, paranormal or otherwise alien phenomena from what we know as fiction exists within its reality - a truly multi-cultural melting pot of almost impossible proportions, and one only made possible by the government's attempts to keep the fact that superhumans live amongst the populace a secret.

As you might imagine, trying to police a world where humans exist alongside demons, ghosts, kaiju and plenty more besides without letting anyone in on the secret can prove to be... problematic. To that end, the government has created the Superhuman Bureau - a group itself made up of superhumans of various stripes and ostensibly tasked with keeping tabs on their fellow superhumans to ensure that none of them pose a threat to the wider populace, and to act accordingly if such a threat does come to the fore. At the forefront of the organisation is a passionate young man named Jiro Hitoyoshi, who works alongside a motley crew including a magical girl and a ghost out of a desire to do what he considers to be right or just, even if that often puts him at loggerheads with both the organisation he works for and his comrades.

It's Jiro's burning desire to enact justice that serves as the foundation of Concrete Revolutio. He is himself a ball of contradictions from the origins of his own powers through to his beliefs and how they sway his actions, and that's exactly the point of the series - that "justice" and what it represents is a nebulous and often deeply personal ideal that more often than not also proves to be an imperfect one. It's a theme that the series revisits time and again from different angles, from the slavish devotion of both Jiro and the wonderfully-realised robot-cum-satellite Earth-chan, through to the outright apathy of others (one character spits out a striking monologue about how her parents' belief in what they'd been led to see as just helped lead the nation to war).

That isn't to say that the series is one-note though - far from it. In fact, one of the greatest pleasures of Concrete Revolutio is sudden, striking moments that organically break out from what often feels like a broadly episodic structure (even as those tales tie into the show's whole) to give you pause for thought or shed light on events in a way that perhaps you hadn't considered previously. This is a series of simple pleasures at times, leaning on every science-fiction trope from time travel stories onwards, but beyond this there's a whole lot of intelligent story-telling to be found throughout the series provided you're willing to look for it, and if you enjoyed nuanced and thought-provoking fare provided by something like the recent Gatchaman Crowds then you'll also glean some real joy from Concrete Revolutio too.

You will, however, note that I mentioned you'd have to look for those moments which shine brightly throughout the series, and that gives rise to Concrete Revolutio's biggest detraction - its first season in particular is a real mess. Granted, it's a beautifully chaotic mess that is packed with colour and flavour, and its second season (subtitled The Last Song) is almost a masterpiece in how it brings focus to what previously seemed almost shambolic and neatly ties up umpteen loose ends, but at a glance this series is a hard sell - its timeline is jumbled and convoluted, its reliance on contemporary Japanese history and culture can be challenging, and its never-ending cavalcade of characters can be impressive in the moment but are sufficient enough in number to give even Durarara fans a headache.

Perseverance will be greatly rewarded however, especially when you reach The Last Song and the series really comes into its own - characters that previously seemed likely to make one-off appearances return and (mostly) reach some state of catharsis, and the core tenets of the show loom large in a most satisfying way. The Last Song also seems to get a far better grasp on its characters - its comedy, previously lacking or unremarkable, becomes assured and adds a fantastic layer of additional entertainment to proceedings, and major members of the cast also get further fleshed out in a most pleasing fashion. If Concrete Revolutio's first season is an enjoyable but decidedly unusual appetiser, its second delivers a three-course meal with aplomb.

Much like its story, even the show's animation is potentially a tough sell. There was initially a feeling that Studio BONES had either over-stretched themselves or were bringing their "B" game to the series, which is colourful but often has a somewhat simplistic look to it in comparison to many a modern production. However, once you settle into its visual style it not only makes a lot of sense but occasionally works tremendously - those colourful, comic book stylings are clearly very deliberate, and some of its later action scenes are simply phenomenal; add in lots of distinctive character designs (all-important given the size of its cast and the world they inhabit) coupled with voice acting to match and you have yourself an effective aesthetic.

All of this leaves me a little conflicted in how to wrap up this review - it would be so easy to wish that the show was more readily accessible; that it was less reliant on a deep knowledge of the history and culture that it leans on so heavily; that its first series was a little more coherent. Yet, on balance, I suspect that to "fix" any of these things would also be to scupper much of Concrete Revolutio's charm and the things that ultimately make it so compelling. That reliance on Japanese history and culture is also one of its greatest strengths, and its initial incoherence is a factor of the incredibly rich world that the series builds.

I can say for certain that Concrete Revolutio won't be for everyone - it's a demanding series and one that requires a lot of patience before you're fully rewarded for your perseverance. If you have that patience however, and if you're willing to pick out the myriad diamonds strewn within its rough first season before it really grapples with the core of its narrative, then you'll be treated to a highly original series that is thought-provoking and entertaining in equal measure.

Look up "flawed masterpiece" in a dictionary, and you may very well find Concrete Revolutio cited as an example.

You can currently watch Concrete Revolutio in streaming form on DAISUKI and FunimationNOW.

8
Its first season is a mess - albeit a beautiful one - but there are still plenty of concrete reasons to bear with this series and watch its world, characters and story flourish impressively.
LATEST REVIEWS