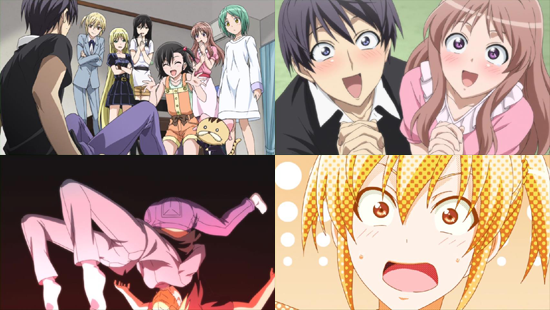 Despite the byline underneath the title, a manga is rarely the product of one single author or artist. A perfect storm of high page-counts and tight deadlines make this almost physically impossible - there just aren't enough hours in the day for even the most skilled mangaka to turn in literally dozens of pages a month. Mangaka are thus often supported in their efforts by a team of drawing assistants; uncredited help who speed up a manga's creation by filling-in block colours, cleaning sketched pencil-marks and doing other artistic grunt-work - sometimes extending into drawing backgrounds, technical equipment and minor characters as well - while the mangaka focuses on the eye-catching foreground detail like central heroes and the big money-shot splash pages. If you've ever wondered why a certain manga such as Gunslinger Girl is only "Presented By" the named mangaka that's because he's only the tip of a long spear of other contributors that drive the story home to you.

One such mangaka is Yuki Aito - a true artist, but like all such craftsmen of beauty and meaning one who refuses to compromise his vision to the corrupt cruel commercial corporate shackles of deadlines. Aito's exasperated editor Mihari has sent him a group of assistants to absorb some of the workload and bring the mangaka back onto something like a schedule that's not completely taking the mickey out of his publishers and readership... but as Aito's manga is a knicker-flashing ecchi affair, Aito himself is an inveterate pervert and the assistants are a series of pretty girls, that might be a taller order than she first realised!

The Comic Artist & His Assistants is the 2014 anime adaptation of the original four-panel manga by Hiroyuki which has been running in Young Gangan magazine since 2008. Although it's being released in the UK by Animatsu Entertainment it's entirely a straight rip of Sentai Filmworks' earlier U.S. release (even to the extent of the upcoming releases previews on the first disc being from Sentai, not Animatsu). Being based on a short comic strip-style manga the anime itself is similarly brief - each episode is only half-length and that abbreviated time is split further into three or four skits. Although in recent years we're more familiar with this mini-episode format through short ONAs, The Comic Artist & His Assistants was designed for actual television so it does have better production values and more detail in its art than you might initially expect -  it also has a distinctive gimmick, repeated multiple times an episode, of emphasising the reactions of characters by zooming in close on their faces and overlaying their hair and the background with screentone dots - thematically appropriate for a comic about manga production and also punctuating the exclamation point of each gag with a bubble of pop-art kitsch.

The gags these mark are fairly workmanlike for a fan service show, centring around Aita's struggles to get his assistants to flash their own underwear at him - all in the purely professional interest of accurate visual reference for his art, of course - and the girls' own disgusted beating him back to his drawing board, along with a bit of gender-reversal from Aito's own overly-effete reactions as he rubs his thighs together and shakes his hips as he blushes coyly at the thought of knickers or runs away crying "you jerk!" like an embarrassed ecchi heroine who's been caught in the changing room.

While Aito is a punching bag for much of the series there is a bit of balance included to make it not totally gruellingly misanthrophic because he is actually a decent artist whose skill remarked on by his assistants. There are a couple of decent gags which play on manga tropes, including a short skit where Aito becomes an expert psychologist defining the girls' personalities by their underwear drawers, or another where the hero of Aito's manga is his own Mary Sue so an editorial instruction to introduce a love rival to boost reader interest in the storyline makes him distraught. Despite all the talk about underwear though, The Comic Artist & His Assistants is actually relatively modest as these sorts of fanservice-led shows go - there's no nudity even in the Hot Springs Episode (although you do get plenty of shots of Aito being punched into orbit straight out of Love Hina) and there's plenty of time talking about knickers but not all that much actually showing them. While typically OVAs are usually reserved for even raunchier content that would make the entire screen white if you had to break out the Mysterious Light Beams to censor them for TV broadcast, in The Comic Artist & His Assistants they're pretty much just more of the same and further continuations pitched at the same level as the main episodes. It's wrong to call it a harem anime as well, because while Aito is surrounded by a clique of girls who helpfully are categorised by cup size so every viewer can select his favourite, there's not really much romance between them beyond a bit of puppy-dog pining from Aito. While in most cases I'd dismiss this as half-hearted and missing the point of a fan service show - don't beat around the bush, just give us the goods and let us get on with what we came here to do - a more restrained approach does set up a couple of more decent gags, such as when the dominatrix's mission to subdue Aito fails early because she's such a weakling her whips barely tickle.

This release is Japanese-only, but the translation is clear and unobtrusive and there is decent signage subtitling as well. The special features include the usual clean opening and closing sequences, but the promise of a "kareoke version" of the ending sequence of the final episode, featuring Aita singing an ode to panties, is really quite a cheat - the Japanese text which shows for the song (which was already in the actual episode anyway) has kareoke colouring as the syllables pass by but the English text is just regular plain standard subtitles and useless for singing along to - it's not a special version at all, just another clean ending.

That also sums up The Comic Artist & His Assistants as a whole - ultimately nothing special. As a comedy it's intermittently funny with a couple of chuckle-worthy in-jokes for familiar manga readers, but it's by and large a by-the-numbers fanservice show where you get an odd glimpse under the skirts of cute girls, and then the girls punch the guys in retaliation to keep it fair. There's pictures of the girls in swimsuits on the cover, and it does exactly what it says on the tin.

5
Bakuman it ain't, but this journeyman fan service comedy hits all the usual beats of a well-known tune in good enough time.