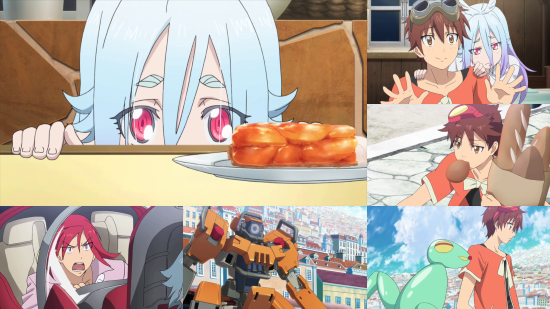 I find myself in the strange position where I honestly don’t have an opinion about Comet Lucifer. Although it has started with a bit of a bang, this futuristic mecha series set on an alien world which was colonised by humanity found itself quickly resorting to well-used anime tropes very early on in its opening episodes. But can its story, its enigmatic characters and its quite unique mecha design save this series from mediocrity?

Probably not. I think it’s best to start with what Comet Lucifer isn’t. The show's premise reminds me of Eureka Seven in many ways, and as much as I would rather not do this, I think it’s best to probably try and compare one to another. Both are based on an “alien” world. Both series have the male protagonist meeting and partnering with a girl who is a part of the planet. Both have oppressive governments who like to send mecha to kill people. Both series’ male protagonists like to recklessly ride on skateboards that can fly. Both series have a transforming mecha related to the girl and both series play on the whole “cute girl being cute as she is new to the human world”... well, kind of. However, one series is actually enjoyable, although a bit tedious at times, whilst the other... well, the other just doesn’t leave any kind of impression.

I’ll leave you to guess which is which.

Actually, let's not, because unfortunately there are other elements which cause Comet Lucifer to be not only a massive disappointment, but actually frustrating to watch. The basic premise is sound, at least for an anime. Free-and-easy boy finds crystal; crystal unlocks access to a seal which then controls a mecha borne from the planet; boy is loved by a girl and he is oblivious; the girl from the crystal has telekinesis and has a massive moe ability; her pet and protector is horrendously annoying - and I don’t use that word lightly. You know those mosquito bites that you get if you don’t cover your skin 100% in a hot country, that’s what this little git, Moura, is. Truly and utterly detestable. Unfortunately, he is also the mecha and one of the major characters. No, really. Comet Lucifer would be so much better without him.

I do have to admit that Felia, the telekinetic girl from the rocks, is actually very cute, but lacks substance as yet. Three episodes in all she can do is basically eat cake, say simple things, and levitate inanimate objects. I know a couple of four year olds who can do this.

I suppose I can also admit that the series is pretty in places. Also, the mecha designs are unique - it’s not very often you see submersible octoped mechs, after all. So that’s two things that redeem this anime. Oh dear. Unfortunately the art direction and the CGI weren’t of note, and even the acting was a bit dry and although the opening song is cute, that alone is not a reason to keep watching.

Maybe I'm being overly negative about Comet Lucifer, but having sat through these episodes twice, I found less to actually keep my attention the second time around than the first. Quite a feat. Unfortunately, Comet Lucifer is not a series I can recommend at this point. It may get better later on, but for such a short series not having anything of note to show after a couple of hours repeated viewing means it just isn’t worth the time investment.

You can currently watch Comet Lucifer in streaming form on Viewster.

3
An unremarkable series so far. Our only opinion? That the stone lizard should die.