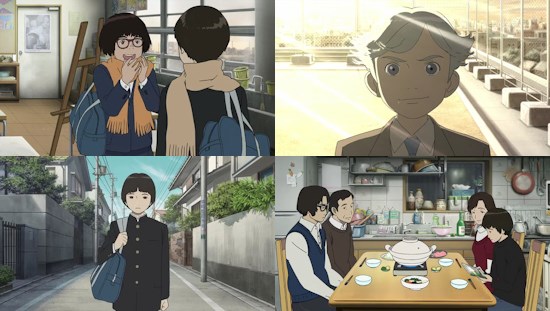 If you assume the existence of any kind of afterlife, it would have to be an organised affair - in the case of Sunrise's much-lauded movie Colorful, its little surprise to see the film's opening gambit depict this afterlife as a quiet and orderly queue in a waiting room.  No doubt there's a lot of paperwork to be filled out for prospective applicants...

However, all thoughts of filling in forms are soon set aside as our unknown protagonist for the film finds himself approached by a young boy named Purapura who offers him a once in a lifetime (once in an afterlife-time?) opportunity - after announcing that he has been selected as a lottery winner, our unnamed foil for the film is offered a chance to have one final shot at living a life, with the possibility of being sucked back into the cycle of reincarnation if he makes a decent fist of it and remembers what terrible things he did to find himself dead in the first place while doing so.  Although he isn't exactly head over heels at the prospect, the next thing we know we've been transferred into the body of Makoto Kobayashi, a suicide victim who is given new life by this injection of another's soul into him.

On the surface, the new Makoto's task looks easy, as he awakens to find himself surrounded by his parents an older brother to make up a proper nuclear family.  Dig a little deeper however, and we find a far more dysfunctional unit, with a father who works far too much overtime, a mother who is having an affair with her dancing instructor and a brother won't even give his younger sibling the time of day.  Even Makoto's crush is involved in "compensated dating", as we being to piece together exactly why Makoto committed suicide in the first place.

Finding himself thrown into these unfamiliar surroundings and circumstances, the new Makoto tries to make the best of his lot, but soon finds himself disgusted and disillusioned as he finds out the truth about his friends and family members - truths that see him turn against them, particularly so in the case of his mother who he insults and almost incessantly derides.  This clearly isn't the reintegration into society that Purapura had in mind upon letting him loose on the world as his charge rebels and moves from being timid to fun-loving and rebellious before becoming downright spiteful.  Can anything mend his ways and help him to understand that for all of their flaws, his family are just regular and decent - if not entirely honest - humans?

It's the attitude of Makoto for much of the film that becomes one of Colorful's biggest obstacles for the viewer - in short, this kid is an asshole.  After his initial attempts to act like a normal boy fail, he soon devolves into a rude, hateful and downright dangerous person who drives his mother to the absolute brink of her sanity and threatens to sexually assault a classmate amongst some of his more egregious offences.  That this comes from an individual who we initially expect to be cheering on as he turns his life around is hard to swallow, and the twist at the end of the movie only makes this worse, clever though it is in its own right.

Less problematic but still very much at large is the fact that Colorful brings up various issues which can taint family life, but it only ever "announces" these issues rather than actually "dealing" with them.  A prime example of this is Makoto's mother - we hear about her depressive insomnia, her affair and so on, but we never gain any understanding of why she engages in her infidelity or suffers mentally beyond the further anguish piled upon her by the "new" Makoto.  Only Makoto's crush Hiroka is really fleshed out sufficiently along these lines, perhaps because her desires are the most easily understood.

On a more positive note, Colorful's basic premise is a fascinating one that does bring some interesting questions to the fore while also providing us with that aforementioned clever plot twist as its finale to square the circle of its story in a way that satisfies in as many ways as it disappoints.  Special mention also has to be made for the film's artwork - while its character designs and animation are basic and nothing to write home about (albeit with a style that does add some realism to proceedings), the movie is home to some stunning backdrops of which we're assured all are actually drawn rather than simply superimposed photographs, which proves to be hard to believe when you actually see them on-screen.

Given its award-winning status, I was expecting a lot from Colorful - perhaps too much, as evidenced by my overall disappointment in the film.  While I admire both its concept and its willingness to depict some tough social issues, it's nigh-on impossible to get behind a film that features an almost entirely loathsome protagonist - when you find yourself willing him on to fail in his rehabilitation, you know you're dealing with a particularly nasty human being, and with little outright humour to lighten the mood of the film his particular sins taken on an almost unforgiveable proportion.

If you think you can be a little more relaxed when it comes to Makoto's transgressions, or don't mind the fact that it only skims the surface of the social issues it raises, there's no doubt that Colorful is an intriguing film that has some great ideas and possibilities behind it - possibilities that make its failures smart that much more when you think of what it could have been.

6
A great concept with a smart ending, but with a main character that's so incredibly hard to like makes Colorful a tough movie to watch and enjoy.
LATEST REVIEWS