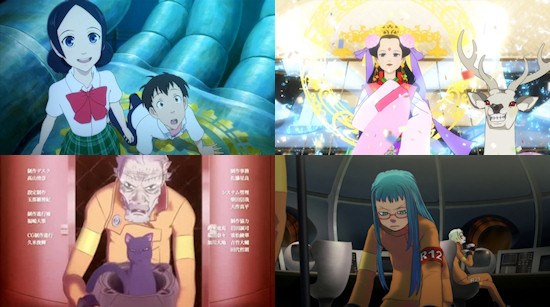 To close off Scotland Loves Anime for 2011, Edinburgh played host to three short anime features, with the first instalment of Studio BONES' Towa no Quon finding itself sandwiched between a pair of CG-heavy OVA from Sunrise - two very different stories, united under the banner of their short length and animation style, hence their inclusion as a single entity for review here (not to mention the fact that Sentai Filmworks will be releasing them bundled together in North America next year).

The first of these two Sunrise efforts to be screened was Coicent, a twenty-five minute animation released in Japan this year that I can only describe (admittedly very, very badly) as "Macross Plus with deer instead of mecha".  Set in the far-flung future, this short film follows a boy named Shinichi on a school trip to Nara - a trip that finds him daydreaming about meeting and falling in love with a beautiful, reanimated princess of days gone by who will be making her re-emergent debut into the world as part of a forthcoming festival.

Such dreams seem like they couldn't be further away when a white deer appears and steal's Shinichi's bag, but fate being what it is his pursuit of this deer leads him to an unexpected meeting with a schoolgirl named Toto - at least, he *thinks* that she's a schoolgirl, although in truth his dream is closer than he could possibly imagine.  However, Toto's little trip in the outside world hasn't exactly been mandated by her "owners", and she soon find herself chased by the elderly female president of the company which reanimated her, alongside her two sons.  Can Shinichi save the day and get the girl?  More importantly, what's with all the deer?

Essentially, Coicent is a slightly oddball story with a heart of gold which derives its comedy simply from being bizarre but still manages to be quite touching as we follow Shinichi and Toto on their impromptu adventure.  There's no real moral here, just a good old-fashioned yarn that packs quite a lot into its short running time via a couple of likeable lead characters and deer.  Lots of deer.  That dance in the end credits, if further evidence were required that this is an OVA which doesn't take itself too seriously.

Although it's almost entirely CG-animated, this short film manages a rather good approximation of more traditional animation methods, with expressive and suitably cute character designs that occasionally allow their CG roots to show with certain movements and scenes, but never to the point of detracting from what's going on in front of you.  Coupled with its fun, enjoyable plot, Coicent is a small but neatly formed little triumph.

This brings us to Five Numbers, a twenty-five minute film written by Dai Sato and also released in Japan this year.  While Coicent impresses with its ability to make CG animation look distinctly similar to more traditional techniques, Five Numbers proves to be much more rough around the edges to the point of actually looking a little ugly, although perhaps deliberately so to some extent.

This OVA's story introduces us to five individuals (plus a cat) as they awaken from some kind of deep sleep.  Exactly where these people are located is a mystery but we learn why they're there soon enough, as these people all appear to be criminals convicted of various crimes.  As they find themselves with no guards and free reign to roam about their surroundings, thoughts naturally turn towards escaping from their confines - something which proves to be more difficult than most of those present could possibly have imagined, and not just because of the divergent personalities of those on-board.

This rather nifty concept gives the OVA an opportunity to explore both its surroundings and its characters, building up a picture of the individuals on-screen in a well-realised, interesting and fun manner while still keeping enough of a sense of mystery for most of its running time to keep you guessing about at least some aspects of its short story.  This all swirls and shifts neatly into the climax of the film, which presents us with a twist or two in line with the gambling themes blatantly on show in everything from the character's nicknames through to the construct of their makeshift prison - a climax which genuinely surprises even if it tests the limits of the story's credulity.

Taken either individually or as a pair, Coicent and Five Numbers are both highly entertaining, whether it's via an oddball and crazy delivery in the case of the former or utilising the smarter, knowing concept of the latter.  CG in anime often gets a bad rap and it certainly isn't perfect in either of these outings (although Coicent undoubtedly wins in terms of convincing visuals), but if nothing else these two short films prove that with a suitably convincing or amusing story such concerns are secondary.

7
A pair of short outings which entertain in very different ways, but both of which prove to be ultimately satisfying in their own terms.
LATEST REVIEWS