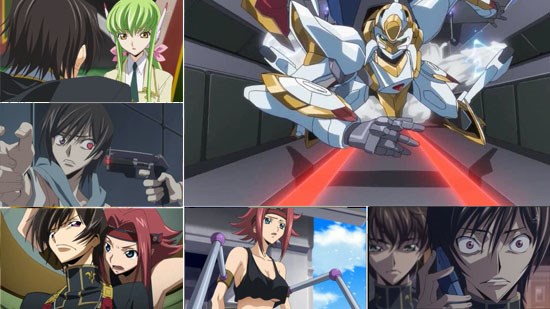 You have to hand it to Sunrise, the studio behind Geass and Gundam - they certainly know how to craft a Sci Fi epic.

With teh first series proving to be an instant hit, both with ourselves and fandom at large, the second series has an awful lot of expectation to live up to - can it actually improve on a bravura first performance?

We have to be careful with this review, after all, we don't want to give away the events of the series one cliff-hanger. What we can say is that Code Geass series two is set one year after the first series.

Let's deal with the obvious question first - will this live up to the expectations of the many Code Geass fans out there? Yes, I think we can safely say that the return of core cast and plenty of mech action has been pitched to please; it’s Code Geass pretty much all over again, with seemingly more at stake than ever before.

Unfortunately this second series is starting to show a few cracks in a previously shiny veneer, chiefly a new trend for one-upmanship. With the epic cliffhanger at the end of series 1, almost every revelation in series 2 is grander and more pressing, which means the last “ohmygodthatwasawesome” moment needs to be bettered the next time. While in some cases the plot can handle it, there are times were the writers have painted themselves into a corner so much that the only way it can be resolved is if something new turns up that wasn’t hinted at before.  At times, it can be so absurd it breaks the fourth wall completely as you'll start to question the entire logic of the show.

For the most part, this first half of series two is as entertaining and edge-of-the-seat exciting as the last series. Things do seem to have been pushed up to ten and the one year gap is seemingly explained away within the opening episodes which will annoy some, but for most these problems can be easily glossed over; it all depends on how much you are willing to forgive when watching the overall story.

The action and revelation sections seem to take a much more primary role within the storyline, with the school section taking quite the back seat, with those sections being shifted to side-stories and the odd standalone episode - A shame as much of the humour and most of the interesting human interaction happened during these segments.

The high quality of the animation and character design is still here and is what we have come to expect from a Sunrise series. The DVD itself doesn’t feature any technical issues and the packaging has to be mentioned again as being a sexy bit of kit which compliments the previous DVD releases... I just wish I knew what to do with the damn paper inserts that come on the back of the DVD case.

Fans of the series will no doubt enjoy everything that Code Geass R2 has to offer. It’s not the near-perfect work it was before, but it is still highly entertaining and will surely rope you into its world. The cracks that have appeared in the plot will no doubt annoy the more attentive fans, but it shouldn’t spoil your entertainment. Sunrise knows how to make a good war anime and Code Geass is no exception.