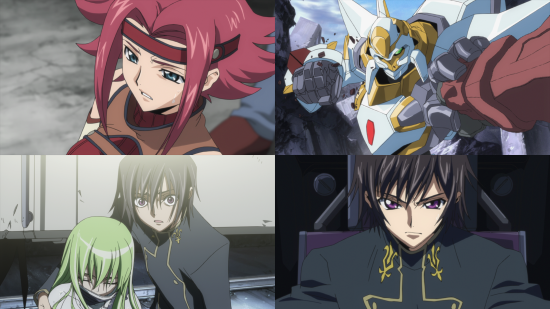 I can’t believe that the original TV series, Code Geass: Lelouch of the Rebellion, is over ten years old. I suddenly feel quite old. So it’s only fitting that to celebrate this award winning animation series the production team have decided to give it new lease of life, in advance of the third television series which will be aired later in 2018. This film trilogy recaps the first and second seasons in their entirety, to aid those new to the franchise in fully enjoying the new series (and to serve as a refresher to those of us who have seen it before). The question is, given that these first two series are 50 episodes long, whether this film trilogy has the same impact, depth and breadth of story which the first two series had.

For those completely in the dark about what Code Geass is, I shall quickly summarise the premise of the series for you. In an alternative history, the Holy Empire of Britannia (I am still not sure whether this is the British Empire or the US, and there is a great deal of debate on this as the series is ambiguous at best) has established itself as the world’s dominant military force. The Monarchy and the Aristocracy have forced their dominion over half of the globe, spreading across Eurasia, China, the Middle East, India, Australia and most recently into Japan, which finds itself renamed as “Area 11”.

Lelouch Lamperouge and his sister Nunnally were exiled from Britannia by their father, the Emperor, after the death of their mother. They find themselves in Japan as political exhiles, prior to the downfall and conquest of the country. In order to survive, they both change their names and hide with an aristocratic family, lying low and trying to move on with their lives. Lelouch however hasn’t forgotten his origins. He spends his time gambling, gaming and generally taking advantage of the Britannian aristocrats, until one day he finds himself in the centre of a terrorist attack where a secret weapon is stolen from a Britannian laboratory. This “weapon” turns out to be a girl who bestows Lelouch with a special ability, “absolute obedience” which he calls the “Geass”. With this ability, Lelouch begins his fight against Britannia by helping the Japanese terrorists in their attempt to overthrow their subjugators and liberate Area 11 (Japan).

The struggle against the Britannia spans the entirety of Japan, and through the course of the series the fight spreads like a wildfire to the rest of Asia and Europe. As eventually Lelouch and his organisation, the Black Knights, take their fight to the heart of the Empire in a wave of death, destruction and pain.

This first film covers the events of the first two thirds of season one, up to approximately episode 17 for those who are familiar with the series. As I return to the franchise I am reminded of the somewhat absurd nature of Britannian society, their focus on the aristocracy, quelling personal opinions and their focus on the education of an elite few to rule over the many. While the series is at times part high-school comedy - at least while Lelouch is still as the Ashford Academy and the vice-president of the Student Council - the theatrical film strips most of the interaction with his peers as well as his constant battle to maintain his secret identity, and unfortunately a lot of the comedy and fun elements of the series are lost. What you are left with is a story which is more focussed, but also shallower without the wider context provided by the series.

Case in point, the first film spends 15 minutes focussing on the first defeat of the Britannian empire during the battle of Narita Mountains, where Lelouch and the Black Knights score a decisive victory over Cornelia and her army. And rightly so as it is an entire episode and pivotal moment in the series. However the film completely skips over other elements of the story such as the rescue of Britannian and Japanese civilians at a hotel, and the development and gradual breakdown of the “pure blood” Britannians stationed in Japan.

Now, this isn’t necessarily a bad thing as there is a fair amount of filler within the series, such as hunting for Zero’s mask at the Academy. However, what remains is a slightly disjointed film which focusses entirely on the battle between the Black Knights and Britannia, and less so on the relationships which were so fundamental to the series impact, such as between Lelouch and Nunnally, or the members of the student council and even Lelouch’s rivalry with Suzaku.

These new films also offer a newly recorded soundtrack as well as voices - starring the original voice cast - and additional scenes. While there are some in this first film, namely the expanded opening focussing on Lelouch and Nunnally’s past and the murder of their mother, most of the film consists of reused and re-cut scenes from the original series.

Given that I have not seen the series for about five years, the film has re-ignited my interest in it. As these films are intended for those new to the franchise, rather than craggy old veterans like myself, I think that the scope of the story would provide a sufficient welcome for newcomers to fully appreciate the core story. Code Geass: Lelouch of the Rebellion Part 1 – Initiation is fluid, enjoyable and full of action. While there are a few slow moments it is well worth a punt on the big screen, even for those of us who know the franchise inside and out. I enjoyed the distilled and concise remix of the series, even with its weaknesses, and the new treatment looks fabulous.

To summarise, if you are an old fan or a new fan looking to dive into the compelling world of Code Geass, get yourself to the cinema for Code Geass: Lelouch of the Rebellion Part 1 – Initiation.

Code Geass: Lelouch of the Rebellion Part 1 – Initiation will be screening in select cinemas from Wed 21st March 2018, as well as a special one off event in London on Tues 21st March 2018. See http://codegeassfilm.co.uk/ for more details.

7
Code Geass is back, concise and kicking butt on the big screen. All Hail Britannia!