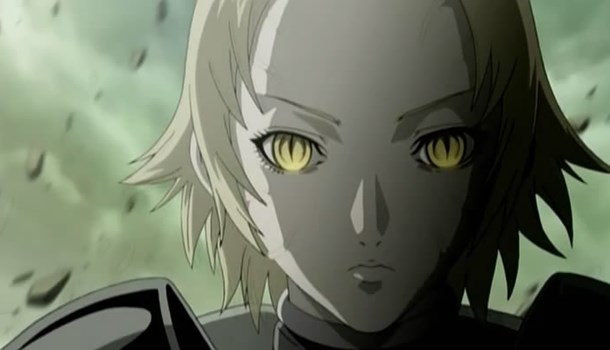 At the end of volume two we left Claire, along with three other Claymores; Miria, Denieve and Helen, in a pretty bashed up state after defeating a male 'Awakened' Yoma. After an initial rough round of introductions, volume three picks up with them discussing why the Organisation selected them to fight the now-bloodied corpse of the Awakened Yoma at their feet. They end up forming a mutual bond and discover that they all have something in common; they've all surpassed their Yoma limit and reached the point of awakening but managed to control it. They decide to disband and go about their own ways, swearing an oath to survive and stay in the Organisation's good books to try and covertly discover their true motives.

This basically sets the tone for the two volumes on show here. The regular Yoma have become pretty redundant in the face of their more powerful Awakened brethren and these volumes up the count of the latter significantly. This is a good thing as the fights are more interesting and varied, compared to the 'one slash, one kill' encounters of before. Throw in a veritable sociopathic Claymore with serious allegiance issues, and an old face from the past, and we have a recipe for lots more severed limbs.

If you hadn't guessed it already, this series very much falls into the 'monster of the week' formula, which will automatically put a lot of people off... including me, usually. But for some reason though, this series really works for me. Yes, some of the cast have unusually large foreheads (a point I hadn't noticed until our keen-eyed Sub-Ediitor pointed it out to me - thanks for that!) but the fact is, I have a great deal of time for shows that know what they're trying to be and Claymore pulls this off with gusto. The enigma around Claire is intriguing from episode to episode - Her almost single minded pursuit of vengeance for Priscilla, the Awakened claymore who killed Teresa, makes her story compelling. For me, this holds the show's quality up when other areas might threaten it.

The series is far from perfect however; On more than one occasion, the writers fail to make the most of character opportunities such as the exchange between Claire and Ophelia - the aforementioned sociopath. They could have done so much more with her character in my opinion. She added a nice edge to the Claymore breed and gave us a glimpse into just how screwed up their plight is. As it is, despite being gripped by these episodes, Ophelia is reduced to just another high-level monster-of-the-week encounter, which is a shame.

On the technical front, the animation is crisp with plenty of emphasis on the action.  The dub on the other hand is quite terrible and, depending on your preference for dubs over subs, this might be a problem for you.

This series isn't going to be for everyone but if you go in with your eyes open and in the right mood, it still has a lot to give.

7
Very much 'monster of the week' material, but the story is kept intriguing by interesting characters and encounters.
LATEST REVIEWS