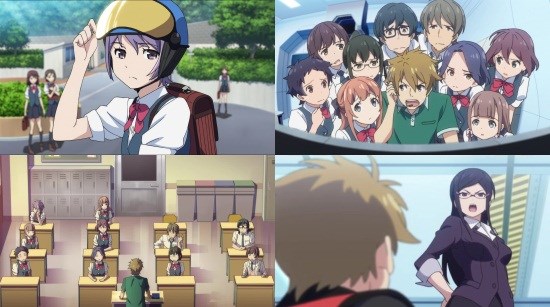 School life and club activities have long been staples of anime, and there have also been a few shows looking into the lives of salarymen in big companies, though most such stories only make it as far as manga thus far. This season however, Lay-duce propose to mash the two genres’ together to be the subject of their first full-length series.

In the world of the future intergalactic travel has become the norm, thanks in no small part to the engines developed by the founders of Kirishina Corp, two schoolboys working out of a shed. In their honour the company now runs the school the boys used to attend and holds a special class called A-TEC, filling it with promising students who are also employees of the company, and all specialising in research and development. When a new transfer student is kidnapped, teacher Kaito Sera organises the class to deploy their experimental new racing ship to rescue him. Unfortunately a series of errors results in the ships costly destruction and the revelation that not only has the newcomer already negotiated his own release, he’s now the new boss of A-TEC and is tasked with dealing with the closure of the class and the redundancy of its members.

Purely on premise there’s a lot of potential in Classroom Crisis with the intriguing blend of business and school life, so it’s sad to see it all squandered away on what is frankly a dull, sub-par series so far.  The plot, despite several interesting moments regarding the relationship between newcomer Kiryu and the company chairman, is essentially the same tired old "underdogs come up with a great idea to prove their worth" plot, with every development telegraphed a mile away and no sign that there will be any innovation to come. Whilst a classic plot can be used to great effect, there’s just nothing here to make it come alive and it’s not helped that its backed by a thoroughly lifeless and unlikeable cast who have been supplied with the bare minimum in terms of character design and personality – there’s even one who looks just like Nagato from The Melancholy of Haruhi Suzumiya and has the exact same personality. A new character arriving in the third episode at least brings some comedy to the series (weirdly given that she’s basically an accountant), but frankly it’s too little too late and the issues with the series aren’t going to be solved with a hammy one-sided romance.

The animation is... well, the show is animated at least, but there’s nothing particularly good or bad about it. It’s just uninspired. Its director Nagasaki Kenji’s first time in the big chair and he clearly doesn’t have much flair in him if this is the level of passion he can bring to his debut work. What you end up with is pretty much what you’d expect if the series was directed by someone who worked on Eastenders was in charge. The scripts are directed from A to B with the camera being moved only when it’s absolutely necessary. You can’t even give him the benefit of the doubt by saying he’s following the manga or light novels as both are adaptations of this work made in some strange assumption that this series was going to be good (and maybe it could have been in more talented hands).

I know that I’m sounding overly harsh here, but frankly this show is airing in the same season as shows like Gatchaman Crowds Insight and Gangsta which boast brilliant concepts and are spectacularly directed to the point where I’m certain that even if they had the same presumably limited budget as this show they would still be incredibly good. Heck, even Monster Musume shows just how good a tired old concept can be with some inventiveness and passion thrown at it. The fact is that below average shows like Classroom Crisis just don’t get a passing grade any more, and from what we've seen so far certainly aren’t worth anyone’s time or money.

You can currently watch Classroom Crisis in streaming form on Crunchyroll.