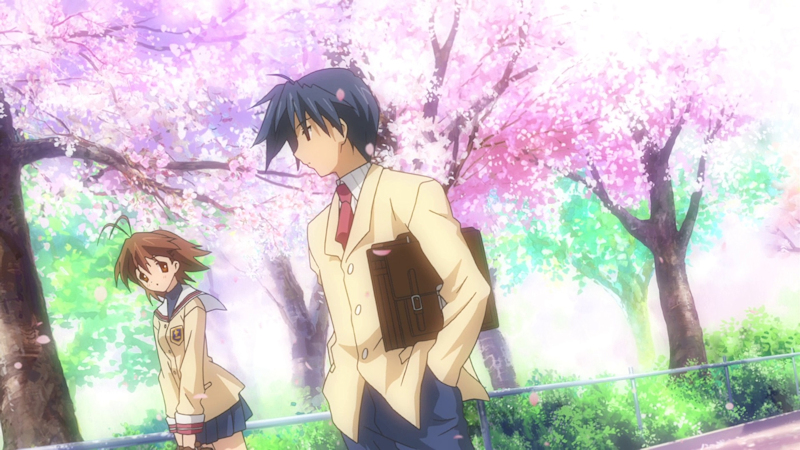 Tomoya Okazaki is a troubled young man in his third year of high school. With deep family issues and a resentful outlook on life, he's cynical and distant. After a fateful meeting with a young girl in his year who's repeating her classes due to illness, he finds his outlook on life beginning to change.

Based on a visual novel, Clannad is nothing if not slow to get off the starting blocks. The first few episodes are more like a disjointed four-panel manga, with short events taking place in a very odd order. Because of this, the anime comes across as stilted early on, but as the series progresses it finds a pleasing stride.

Joining Tomoya and his new friend Nagisa are a host of oddballs - Tomoyo Sakagami is a rough tomboy trying to become more ladylike, thwarted at every turn by Tomaya's dim best friend, Yuhei. Kotomi Ichinose is a gifted student who likes to read barefoot in the library, and Fuko Ibuki is a first year with a strong love of starfish and a tragic past. The anime revolves around the lives of these characters and how their interactions deeply affect each other.

In fact, it seems pretty much everyone in Clannad has some tragedy in their lives, and if you're not prepared to become emotionally attached, you'll find the series pretty draining. The slow pace and background melancholy are thankfully kept at bay by some lighter moments, but Clannad is designed with tissue sales in mind, so have plenty ready if you want to invest your time here.

Because of the heavy emotional core of the series, subtitles are the way to go here. The dub is okay, but doesn't manage to capture the depth of the Japanese soundtrack.

Visually, Clannad is lovely. From the whimsical opening credits to the core animation, everything is sharp, smooth and attractive. In a world of giant mecha and slimy monsters, it's nice to be reminded that the everyday can be breathtaking too.

These twelve episodes only capture the first quarter of the Clannad story; the After Story arc is actually even more draining and you'll be needing a bathtub for the tears once those volumes get released; for now however, Clannad remains an engaging, often humorous look at the lives of people for whom tragedy is an ever-present facet of their lives. The level of investment you're prepared to put into that world will determine what you get out of it.

7
You'll get out what you put in, but Clannad is a lovely looking school drama, with the emphasis firmly on drama.
COMMENT AND DISCUSS
blog comments powered by Disqus