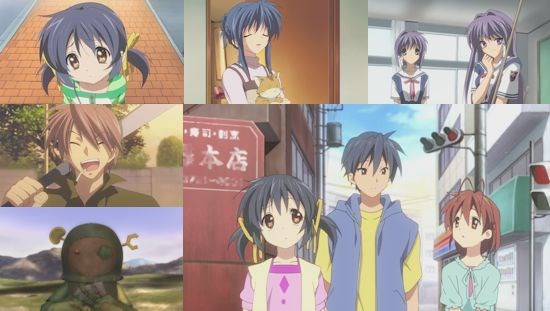 Having ended with a confession and the realisation of a dream for its leading female character Nagisa, you might be forgiven for thinking that this is the perfect way to close out the Clannad story.  Think again however, as the tale continues into this second season of Kyoto Animation's visual novel adaptation, subtitled After Story.

A large chunk of the first half of this second season is effectively set aside for tying up loose ends from the first, and more specifically giving some screen time to explore the back stories and circumstances of some of the characters who weren't given a lot of time to shine the first time around.  Thus, things kick off with the good, old-fashioned anime staple that is a baseball game, before we watch Sunohara trying to find a fake girlfriend to impress his younger sister while exploring his situation, visit Misae and her dedicated feline companion and become embroiled in a rather surprising tale of delinquent gang warfare.

Eventually however, we roll around to graduation time for Tomoya and company, which is where your average anime would probably end - not so here, as we continue onwards into life after high school, for much of the cast at least.  While Tomoya struggles to fathom what he wants to do with his life and makes his first steps into an adult world, Nagisa's struggle is with graduation itself, as her fragile health threatens her ability to attend the requisite amount of school days to avoid retaking her senior year again.

It's these latter episodes on this volume which is rather a breath of fresh air, not just for this series but the genres it straddles - it's so easy to finish a story with graduation as a saccharine line drawn under what is supposed to be the best days of your life, so it's to Clannad's credit that it puts some time and effort into watching Tomoya find a job and a place to live and juggle the responsibilities of everyday life.  That it does so in a realistic manner (who can forget that first full day of full-time work and the unfamiliar feeling of exhaustion after?) while also leveraging elements set up much, much earlier in the series really goes to show the care and attention given to the grand narrative of its story, and having spent so much time with its main characters we're now sufficiently invested in them to be keen to watch this struggle and character progression with a sense of genuine interest.

Even before we reach this point, After Story shows the same sense of craft exhibited by the original series - its comedy is unceasingly superb be it physical slapstick or witty dialogue, and although its drama and emotion is smeared on thickly like butter on fresh toast it certainly knows how to pull at your heartstrings in just the right way to provoke some kind of response more often than not.  Who knew that a story about a woman and her cat would reduce a grown man to tears?  Only Yukine's story struggles to make any kind of emotional connection with the viewer, feeling a little too much like a re-tread of ideas previously used by the series in conjunction with a story that is just too hard to suspend your disbelief towards to engage with - when you come to the end of this volume and realise you've been holding your breath at its closing scene though, you know that the series has you well and truly in its thrall.

As much of a great-looking series visually as Clannad was, After Story succeeds in being a step up in that regard - the break between production of the two series clearly saw Kyoto Animation hone their skills a little, to make the best of the show's unique character designs while putting them into some gloriously realised suburban settings, while mixing things up a little via occasional trips to the "Illusionary World" which seeks to underpin the more supernatural elements of the series (even if it all feels rather needless and frivolous at this juncture).  Such is the colourful and vibrant nature of the series that it's a real shame that we didn't get to see this show in Blu-Ray, but the UK DVD transfer is good enough to be worth watching as a visual treat in its own right.  The Japanese language track matches the comedy and drama of the series well, and certainly does a far better job than an English dub that threatens to become irritating thanks to some overstated performances from its female cast.

By this half-way point of its second season, you'll probably know whether Clannad is for you or not - its comedy might work for some, and its drama might not work for others (it's certainly hard to believe that every kid in this world has some kind of overbearing tragedy in their past!), but if you're still on board this train of laughter and tears by this juncture then it seems safe to assume that you're enjoying the right, and this first half of After Story provides more of the same along those lines.  If anything, After Story derives new strength from looking at life after school, and the joys and hardships which growing up and having to worry about adult concerns entail.  If the final volume can continue to make the most of these ideas while continuing with the elements that have made the series enjoyable so far, there seems little doubt that it will continue to be hugely enjoyable and occasionally moving to watch.

8
More laughter and tears, bolstered by a move beyond the traditional school setting into the big wide world of finding a place to live and work.
LATEST REVIEWS