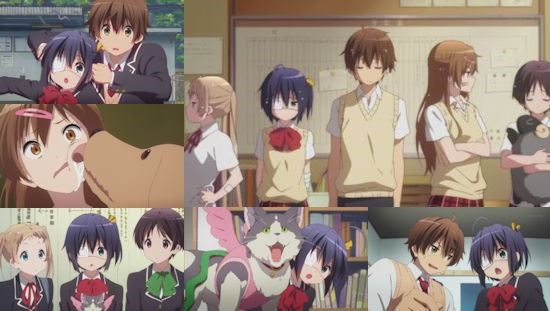 We all have moments from our childhood that we'd rather forget, gloss over and avoid ever talking about again, and for the protagonist of Kyoto Animation's latest outing this is perhaps the case more than most.  The reason for this is that Yuuta Togashi spent most of his life at middle school referring to himself as the "Dark Flame Master", a dark lord of magic embroiled in a constant battle against the forces that would seek to oppose him.

Of course, Yuuta is no master of dark flames, and those middle school delusions (the "Chuunibyou" to which the show's title refers) are a cause of regret so huge that he ensures that he can attend a high school as far away as possible from his former classmates and those bad memories in the hope of starting afresh and having a normal, fulfilling high school life.  Unfortunately for him not everyone is quite so determined or quick at doing away with these delusions of grandeur, and by sheer bad luck Yuuta finds himself making the acquaintance of Rikka Takanashi, a classmate who insists upon wearing an eye patch to seal the "Wicked Eye" that most people would recognise as a coloured contact lens.

Thus, the scene is set for comedy hijinks aplenty, as Yuuta reluctantly finds himself dragged into the delusional world of Rikka and some of her friends, while also finding at least one kindred spirit who has a secret past of their own to hide - by the time we reach into the second half of the series, there's also a softer centre to proceedings as we begin to dig into the cause of and reasons for Rikka's eccentric behaviour.

It seems almost redundant to say this of a Kyoto Animation series these days, but Chuunibyou demo Koi ga Shitai looks gorgeous for the most part - its character designs are distinctive and well-realised throughout, the background scenery is impeccably detailed, and when the show decides to show the fruits of Rikka's delusions as though they were real it produces some stunning action scenes that make you with that the series was actually... oh, I dunno, a third series of Full Metal Panic perhaps.  Even if you aren't engaged with what's happening on screen, this show is a feast for your eyes provided you aren't allergic to its overly cutesy character designs.

Unfortunately, beyond its visuals Chuunibyou is a far less striking series - initially, it's a huge amount of fun to watch as Yuuta becomes embroiled in his nightmare scenario in a blaze of slapstick comedy and one-line exclamations, and any tendency towards viewing the show as a harem comedy is quickly extinguished, but once you've gotten comfortable with the show's premise.... well, it's actually pretty dull.  In terms of comedy, the show soon reveals itself to be a one-trick pony as it relies on the same mix of physical comedy and "hey, look at these characters reciting weird fantasy-science schtick" over and over and over and over again until it drains you of any real desire to watch more.  Although episode seven promises something a little deeper, it doesn't seem to know how to execute on its dive into Rikka's past and the result is scrappy at best.  There are standout moments (be they comedy or something sweeter) scattered throughout the series, but there aren't enough of them to really make good on the inherent promise that the show holds early on.

This ultimately leaves the series feeling like "just another light novel adaptation" - a sometimes fun but largely middling story that would find itself lost in the wash of similar series were it not for its eye-catching animation quality.  It would be unfair to be too harsh on Chuunibyou - it does posit an interesting idea and looks set to do a reasonable job of following through on it - but by the same token it seems to struggle to break out of what quickly becomes a formulaic and repetitive approach which ensures that it'll never be any kind of classic.

You can currently watch Chuunibyou demo koi ga Shitai in streaming form via Anime on Demand.

6
Its visually sumptuous and initially a lot of fun, but its lustre wears away quickly to reveal a decidedly mediocre and repetitive series.
LATEST REVIEWS
Girls' Last Tour