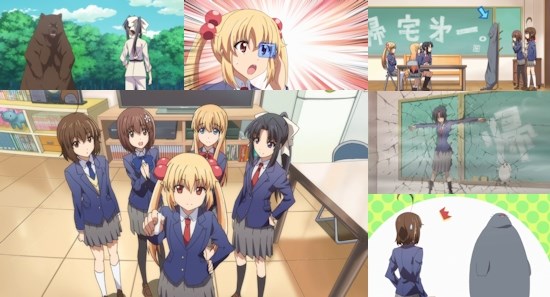 First things first, the title of this streaming series is a bit of a (admittedly deliberate) misnomer. Disappointingly there is very little “going home” to be seen in Chronicles of the Going Home Club. Those familiar with the plethora of school-based anime will have heard the term “going home club” before I’m sure; it’s one used to refer to the act of going home rather than joining in with any of the usual after-school clubs so prevalent in anime (and one presumes real Japanese schools). However, in this series the titular “Going Home Club” is an after school club itself, with a clubroom like any other.

The series sets out it’s stall early on. Before the opening credits of the first episode even kick in there is talk of seal lactation, nasal membranes and an incident involving a seal costume to name but a few. So off-the-wall comedy, with a heavy seal leaning, in an after-school club setting is the order of the day. Unfortunately the comedy on show here is more miss than hit, with many gags falling flat or outstaying their welcome. One joke in particular, which references a certain well known shōnen series, felt like it had been used over nine thousand times. That’s not to say it’s all bad - the series is at least self-aware enough to call itself out for that one - and you will almost certainly find yourself chuckling along occasionally. Some of the biggest laughs to be found in these early episodes come from the series frequent breaking of the fourth wall, though even this feels over-used at times.

The series stars Natsuki, the aerial haired "straight man" and her foils: Karin, the height of “feminine appeal”; Sakura, the not-so-normal “normal” one; Claire, who’s exceedingly wealthy; and Botan, the bear-fighting martial arts master. Thanks to this we have a club full of clichés (and a seal) ripe for lampooning, though the series doesn’t hit any kind of stride in doing so. Poor Natsuki spends much of her time trying to figure out exactly what constitutes the activities of the Going Home Club while being infuriated by the various other members’ odd behaviour, and I must confess I’m with her on both counts. There is no evidence of any over-arching plot in these early episodes and on the whole the episodes thus far feel stretched. I can’t help but feel a shorter format would have suited the series style better. I suspect part of the series problem is that many of the jokes are simply lost on a western audience. This is obviously a danger with all Japanese comedies, though it feels particularly pronounced here, especially when the girls go delving into Japanese history.

With so many classic anime comedies sharing similar school settings Chronicles of the Going Home Club has a lot to live up to, and it is in comparison to other such comedies that the series really falls short of the mark. Especially when considered alongside the likes of the far superior Melancholy of Haruhi Suzumiya which, revolving almost exclusively around the activities of a similarly wacky after school club (the SOS brigade), is arguably this series closest competitor. Despite occasional signs of promise I can’t really recommend Chronicles of the Going Home Club. That said, if bear wrestling and seals are your thing this might well be the series to check out this season.

You can currently watch Chronicles of the Going Home Club in streaming form on Crunchyroll.