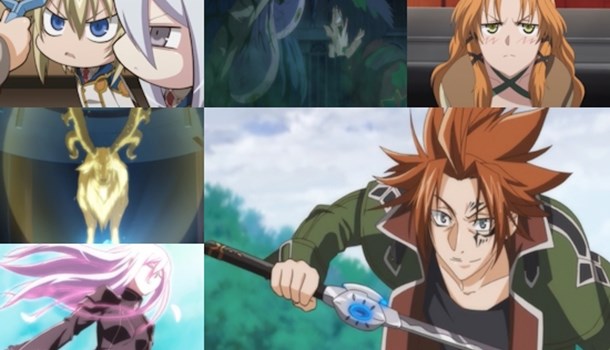 Chrome Shelled Regios ended its first half in Collection One with a number of problems (which we talk about here) but the promise of improving on them as its storyline was beginning to firm up and antagonists made themselves known. Now that we advance into the second half of the series, is the chrome polished to a shine or does it remain dull and scuffed?

We left our heroes at the end of Collection One trying to stem the flow of an ability-enhancing - and mind-destroying - drug called "Overload" amongst the student body of the Academic City of Zuellni. It's a bad enough problem that it could corrode the city from within, but it serves as a marker to show the scale of the even-greater threats gathering over the Regios. The Electrionic Spirit, the guiding intelligent ghost of the destroyed Regios of Gandoweria, now wanders the wastes separated from its dead city... and the presence of this "Fallen One" is driving the Electronic Spirits of the surrounding Regio - including Zuellni - mad and uncontrollable. Can the Fallen One be contained before Zuellni crashes into danger, and just what dark opportunities does it present to the hidden factions who want to see it further run amok?

The tension-deflating implausibility of the "cosy catastrophe" of the Chrome Shelled Regios world observed in Collection One unfortunately proves stubbornly persistent in Collection Two. Leerin visits another city and is arrested - her detention centre is a four-star hotel with buffet service in the dining hall. There were already some rather silly conveniences in the first collection, but you can't accuse Collection Two of a complacent lack of ambition as it becomes even more ridiculous - Nina visits a convalescing comrade, but any nuance of this touching scene of wounded souls seeking outreach across a divide of historic hurt is quite overlooked as you spend the scene shaking your head in baffled wonderment as they sit at the shore of Zuellni's Lake District with Alpine hills rolling into the distance. All I can say is, bring on the apocalypse! According to Chrome Shelled Regios the destruction of the world will be positively trading up.

Some will say that I'm obsessing over this too much, that however much nonsense it may be the cosy catastrophe is ultimately only a backdrop and shouldn't detract from the story the characters are following. However, we should focus on it because the anime does bring the post-apocalyptic environment right to the forefront, and then stumbles over it. Hanging over the head of much of the second half of this series is the sword of the Intermunicipal Challenge - although life in Zuellni is comfortable, it's in many ways a veil of complacency as conditions rest on the insecure prop of a single resource mine which can be taken as a prize by another Regios should it win an organised battle between the two. This rather polite manner of making war seems more like a sports meet than a desperate struggle for survival, but nonetheless the Intermunicipal Challenge is a slowly-looming shadow as Collection Two progresses - one episode is even called "The Night Before the Intermunicipal Battle" - and it finally drags Chrome Shelled Regios out of the protracted school-tournament arc it was meandering aimlessly in for over half the series.

Then halfway through the final disc, when this threat is fully bared... it's suddenly dropped into conversation that there's a special Treaty which protects the Academic City of Zuellni from having its resources seized. But wait! Will the enemy Regios break the Treaty and attack anyway? No. No they will not. This show fakes-out from the Intermunicipal Challenge it's been building up to all series three times. Take head,  lower face into hands, shake head.

Don't bother raising it, either, because the rest of the plot remains a complete mess. The Legend of Regios cutaways remain as badly-paced and as random as ever - a fitful attempt is made to make it a show-within-a-show like Martian Successor Nadesico's "Gekiganger III" sequences, as the cutaways are watched on television by the main characters, but this attempt is abandoned after a couple of episodes and they return to being inserted into the footage as if someone dropped the reels in the editing room and got them mixed up when re-stacking them. The appearance of one of the characters from these past events in the main storyline finally provides an extremely tenuous link between the two, but it's so brief as to almost be a cameo and everything we see in the past still has neither no actual relevance to nor explains anything in the present; as the past action itself is presented in such small, spaced bits that it's incomprehensible, the whole exercise is a waste of time. It would have been much better to have stitched all these together into an OVA or mid-series break episode... but then again, that might have shown up the risible faux-noir style of Legend of Regios a little too obviously.

The climax of the series is just as disjointed. There are these baddies - well, I assume they're baddies because they wear masks and talk about themselves in the third-person - who stand and get shot and don't do all that much before literally vanishing. A giant Contaminoid shows up... because it's the final episode and there probably ought to be one there I suppose.  After being almost completely absent since the first episode the Heavens' Blades rock up for all of five minutes, presumably as a bit of belated fanservice for the light novel readers. Layfon meets an old ally who's literally decided to turn heel in a single scene, they fight for a bit, and then leave. It's a hodgepodge of random incidents that can't even really be called fragmented because they were never linked together all that well in the first place (maybe light novel readers were expected to fill the gaps themselves), just flung in there so we can finish up on a few big explosions. We never get to see too well why "The Fallen One" is that much of a problem in the first place - by and large it seems to really be an entirely passive presence. In fairness thanks to it causing Zuellni to run amok the Regios does run into a few Contaminoids, but these are easily despatched and Zuellni never feels in peril. I'm reminded of the 1980s Appleseed OVA where the futuristic city of Olympos will collapse into anarchy and chaos if its computers are deactived... and when they do, all that happens is that a water fountain stops. A child looks a bit puzzled, and that's about all you get for disaster.

I'm also wondering if I really should be rooting for Zuellni at all, because the attitude of many of its residents needs serious adjustment! The President tells Layfon, in all seriousness, that he must "find his own reason to fight" and that "if you fight for others, you'll lose" - remember that this is the same chap who forced an unwilling Layfon to become a Military Artist for the 'good of the city'. Another character is taking the dangerous degenerative drug "Overload" to enhance his kei powers, yelling that he'll go to any lengths to protect his city. Admirable sentiment, except he's not protecting his city, he's trying to win a mock training battle in the Military Artists' internal tournament to become first in precedence, so he's doing this entirely for his own glory and vanity. When Layfon is badly hurt rescuing a schoolmate from a collapsing bridge, Nina's reaction is "how will this affect our next tournament battle?" That's okay though, it's an opportunity for her to learn a lesson and grow, but that lesson is not a measure of remorse for her callous attitude but that she needs to get stronger herself so she wouldn't have to rely on Layfon. Well screw you too, you selfish cow! Why should I care that you're being overtaken by a destructive alien power again? It seems to be just what you want! Altogether it's no surprise that Chrome Shelled Regios is a post-apocalyptic world if these outright insane characters were custodians of it.

Can anything be salvaged amidst the ruins of bizarre characters and a broken plot? The show continues to look great - I'm a great lover of the new uniform designs shown by the other platoons which achieve a good balance of style and functionality (and Dalsenia's enlarged helmet to accommodate her enormous hairdo provoked a good-natured chuckle) and the kooky irregular nature of the Heavens' Blades also came across in their wildly differing dress, as briefly as we saw them; the Contaminoids have decent monstrously-warping designs; and while the concept of a lake district is silly, it does still make for a lovely sunset. Chibi comedy interludes are genuinely funny with refreshing light-heartedness, and at the other end of the scale while there is a preponderance for throwing energy bolts rather than actually using techniques, there are a number of very attractive duels and fight sequences in the second half with fast pace and developed animation. Lastly, Layfon doesn't shrink from committing himself to a fight and has dignity in what he is searching for in his own mental journey. While some dubbing choices are odd - the "Salinban Mercenary Training Group" has its name read out in full every time it's mentioned, to a state of distraction - the acting overall is earnest and competent. Mistress of the Match for voice acting is Monica Rial as Felli. She could be superficially dismissed as a monotonous Rei-knockoff but that is a real disservice because speaks in a level tone, but by no means a flat one - easily sliding out from underneath this upper layer into squeaks of frustrated adolescent outrage which really hone a point to her shin-breaking kicks!

The extras of Collection Two are the same as Collection One, being clean opening and closing sequences, with a few versions of the ending sequences as different members of the Japanese voice cast sing the accompanying song. The opening is the same as in the first half of the series, but we have a new ending sequence, although the music in general is pretty forgettable.

Unfortunately nice ancillary material doesn't rescue the main product. Chrome Shelled Regios proves to be a disappointment. It's a great shame as there is the germ of something here but it can't grow in the dusty earth of the setting - I wanted to like Chrome Shelled Regios, and if it had been more forthright with its setting, consistent with its character arcs and especially disciplined with its plot then I may have done. Only modifications are needed - things like Zuellni's daft garden districts for instance; keep them, but make access a privilege and not something that's apparently so plentiful that it can nonchalantly and unconcernedly have entire chunks blown out of it as the Military Artists use it as a battleground for their platoon tournaments! The anime, though, persistently misses opportunities, and its scattered good elements like the Regio themselves are just scattered particles in a wider waste of chances.

5
Some better action and comedy that fails to find a point thanks to dissatisfying storyline resolutions.