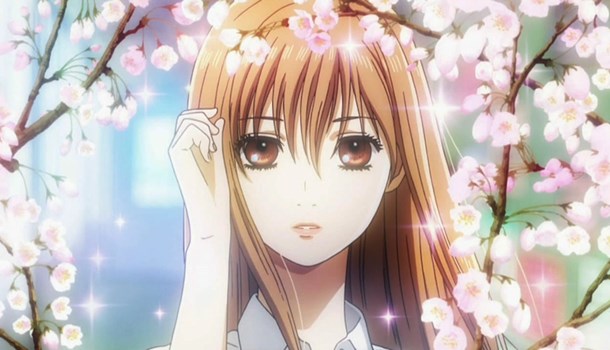 As mentioned in my review of "You and Me", I have taken to randomly choosing shows that are streaming this season to try out. After all, why not take advantage of the wealth of available shows that are available and broaden my horizons? Chihayafuru is the second show this season I have picked out in this regard. I went in knowing absolutely nothing.

This, honestly, was a rather poor move in this case. While this method of picking shows allows me to sidestep any hype that has built up in anticipation for the show, it left me woefully unprepared. The primary binding element of Chihayafuru is the game of karuta, an element of Japanese culture that up until this point I have had zero contact. To boil the game down to its barest bones, Karuta is an amped up version of Concentration. The first line of a poem is slowly read out, and the two competing players then race to identify and pick up the card that contains the corresponding second line. Whoever can pick up the most cards wins, although there are many more intricacies to the game that I am glossing over here for the sake of brevity. Outside of this game, Chihayafuru concerns high school girl Chihaya and her desire to open up a karuta club in her school. Some extras fawn over how pretty she is for a few moments before the show undergoes a massive shift into flashback, showing the origin of her obsession with karuta. The flashback takes up the majority of these opening episodes before flipping back to its "modern day" setting in episode four via a re-union of Chihaya with one of her childhood friends.

After watching the first episode and being somewhat bamboozled by the game of karuta, I made haste to Wikipedia and did a quick spot of research before re-watching the first episode. If after reading this review you feel like watching this show I would highly recommend reading up on the Wikipedia page as well so you are well prepared at the outset. The problem is, even after this research and my best attempts to get invested in the show, the way it uses the game of karuta leaves me utterly cold. This isn't for a lack of trying on the part of Chihayafuru - the show conducts itself much like a show designed to sell a CCG would, constantly extolling the virtues of the game and tying every single plot point presented in the show back to karuta.
This is to the detriment of the show as a whole, as all of the character drama that the show presents is swallowed up in the shadow of the game, eroding the tension and cheapening the impact of both plot events and character interactions. To make it clear here, the games of karuta that the show presents are great - its the way that every last thing has to relate to karuta that left me cold, dis-interested and in some cases frustrated. For an example, at one point in the flashback a character announces he is going to a far away school - Chihaya, instead of being concerned about their friendship, instead starts whining that the character can no longer attend their local karuta club. This is not an isolated incident - almost every dramatic moment is forcibly linked back to karuta. Another magnificent example of the fetishism of karuta is when a character explains to the others (and so the audience) that karuta is not played overseas because "It's not an easy game"; Actually, I think the fact that it requires a really high level of listening and reading Japanese is a more pressing reason! The constant over-emphasis of karuta in every aspect of the show feels forced and hollow, draining all of the depth out of what would be some genuinely interesting character moments and well-paced drama.

This also translates to a lack of emphasis on the characters themselves, who for the vast majority of the show so far have a scant single character point each to mark them out. You have ugly duckling, jerk, and karuta nerd. That, sadly, is it. Any characters who don't play karuta are demonised; like Chihaya's sister who is a teen model and comes across as one of the most spiteful "ugly stepsister" characters you may ever find. This is a massive let down for the show as the scripting and presentation of the drama, when it happens, feels very taut and makes a definite impact. Thankfully this situation starts to improve once the flashback ends and the characters start to stretch out, but it all still feels hamstrung by the constant need to tie everything back to karuta.

At a glance Chihayafuru looks damn pretty - choc full of detail in both characters and background but marred by a few off-putting items that may or may not bother you as they did me. Some of the shading employed in the show actively pushed me away due to how artificial it makes the characters look - rather than a natural effect of the lighting it instead looked like a carefully cut out piece of translucent tissue paper was being hung a few millimeters above the character's skin. The characters, particularly the children, also have massive soul-devouring irises rich with detail to a level that is outlandish. The audio employed in Chihayafuru is pleasant, providing a nice accent to the on-screen action and emotion.

For me, Chihayafuru is a frustrating watch. There is a nice drama that wants to be told in this show but the overbearing use of karuta smothers it, cheapening the emotion on display by constantly linking it back to the game. It almost feels like the show is afraid to let the character's actions stand up on their own, and so props it up by linking back to karuta constantly. If the show could work out a proper balance between the game and the character elements so that they re-enforced each other, rather than letting one drag the other down, then Chihayafuru would be a very strong, engaging show to watch. As it is currently, these first four episodes have left me stone cold and more than a little irked at the wasted potential.
You can currently watch Chihayafuru in streaming form via Crunchyroll.

3
A beautiful show that falls apart due to over-reliance on its unique element of karuta, overshadowing the simple drama at its core.
LATEST REVIEWS