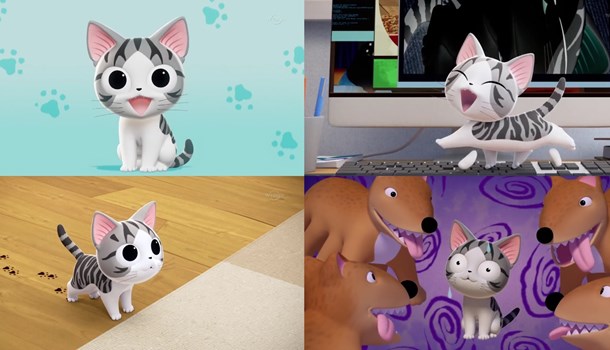 Chi's Sweet Home tells the story of a kitten who wanders from her mother and siblings during a walk. Lost and scared, Chi is found by a young boy, Youhei, and his mother. Initially they try to find a new home for Chi, Youhei and his parents become attached to Chi and decide to adopt her into the Yamada family.

You may already be familiar with Chi's Sweet Home; based on the ongoing manga that started in 2004, the series has had two anime adaptations as well as an OVA. Furthermore, the adorable gray kitten is highly popular as a character, appearing on anything from clothing to toys. The newest instalment of the series, Chi's Sweet Adventure, likely hopes to expand the franchise.

The biggest difference between Chi's Sweet Adventure and its previous animated adaptations is undoubtedly the style: instead of 2D art, the third season consists entirely of 3D CG animation. Opinions about the new style are divided; whilst some may see this as an improvement, others argue the series has lost its charm with the introduction of 3D.

Another difference is the length of the series; whereas in previous seasons each episode was around the three minute mark, the episodes in Chi's Sweet Adventure are twelve minutes long. This doesn't mean there is more depth added to the anime; the slice-of-life style remains light-hearted and the story simple for anyone to understand. This is a series that doesn't dazzle its viewers with complicated plots or though-provoking themes, but rather focuses solely on being cute and sweet. Viewers follow Chi as the young kitten learns about the world around her, from using the litter box to even playing with a computer. Chi narrates her adventures, sometimes through words and other times through cute squeaks and squeals. Due to being aimed at a young audience, words are often not even needed - the animation and expressions are clear and easy to follow. Some young viewers may learn a lesson or two from the series, such as wiping your feet before entering the house, cleaning up your toys, and don't touch computers without permission!

Also worth noting is that, after two seasons counting 208 episodes in total, the third season portrays Chi as only living with the Yamada family for one month. This can be rather confusing seeing as though the previous seasons definitely span a larger time period than just a solitary month. It is unclear as to why or how this new timeline benefits the anime in any way.

The third season sticks to its familiar formula: a simple, cute story about an adorable kitten. Chi keeps exploring and learning about the world around her, only this time in 3D. The extended episodes make the series feel a bit slow compared to the energetic three-minute episodes from previous instalments. The 3D animation isn't the cat's whiskers, but that said, young viewers will undoubtedly still be captivated with the adventures of the quirky kitten. Similarly, the escapades of Chi can still be entertaining for adult fans of the feline, but the new look may not boost the franchise as such.

6
Despite introducing 3D animation, the third season of Chi's Sweet Home is not the cat's whiskers.
LATEST REVIEWS