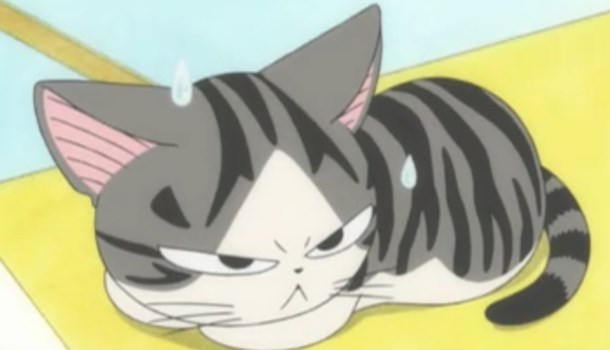 In essence, there's only one thing you need to know about Chi's Sweet Home - It stars a cute kitten.  For most of you reading this, that information alone is probably enough to either send you rushing out to watch this series or rushing away from this page lest the sight of adorable fluffy things burn into your hardened, wicked soul; for if there are three certainties in life those three things are death, taxes, and that cats are both cute and funny to the vast majority of the populace.

The original series of Chi's Sweet Home was broadcast in Japan last year, derived from a popular serialised manga to great effect and eschewing the usual twenty-something minute episode format in favour of numerous (104 in total) small three minute vignettes that perfectly fits its source material.

Sadly, this first series of Chi's Sweet Home is yet to be made available to Western viewers but its follow-up, subtitled Chi's New Address, is getting the Crunchyroll treatment, with a bundle of new episodes made available each week.  Luckily, Chi's Sweet Home isn't exactly the kind of series to feature complex, sprawling and over-arching plots, so dipping into this second season is reasonably simple for anyone new to the show, but if you're looking for some background then here it is - Chi is a kitten who becomes separated from her mother one day, and finding herself abandoned and down on her luck she's taken in by the Yamada family as their new pet.  The trouble is that the apartment where Youhei and his parents reside is a strictly "no pets allowed" home, and coupled with Chi's boisterous nature this naturally causes headaches aplenty for all concerned.

As this second series begins, so Chi's living situation has reached a critical point, leaving the Yamada family considering giving her away to relatives who live out in the country in Hokkaido.  However, torn between their home and their pet, a moment of serendipity resolves all of their troubles, as the family moves into a new home nearby (hence the show's subtitle).  For a simple little series about a cat, the episodes dealing with this drama are actually a little emotional despite their short running time, although if you're new to Chi's Sweet Home and thus have less time invested in these characters then this is arguably less likely to be the case.

Away from those moments of drama, the majority of Chi's New Address is all about wringing as much comedy and cuteness out of the show's premise as possible, as Chi explores the world with her own feline take on things, making the most of life's simple pleasures such as climbing the stairs or sleeping in a cardboard box while remaining completely oblivious to the stresses, worries and deadlines of every-day life exhibited by her owners.  If you are or have been a cat owner yourself, much of this behaviour will be instantly recognisable to you, and thus the series will be all the more amusing for it as your own cat-related anecdotes pour forth.

To be honest, I imagine cat lovers are the only real subset of people who will relate entirely to this show, which somehow manages to remain adorable in everything it does despite its short episodes, low-budget animation and simple storytelling objectives.  If you are a cat owner or lover, then this really is a series that you absolutely must watch, and press-gang anyone else you know who loves cats to watch as well.  If on the other hand you either dislike or are generally indifferent to our feline friends, then you're very much going to be left wondering what the fuss is all about.

9
A must watch for any cat lover who can withstand such an overdose of cuteness.
LATEST REVIEWS