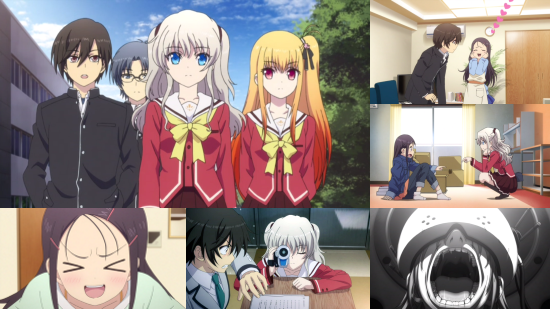 One of the many tropes that crops up in fiction involve a group of teenagers gaining “superpowers” or extraordinary abilities. Powers such as the ability to fly, turn invisible, superhuman strength, pyrokinesis, psychic ability and so on are commonplace in almost every medium and are equally common in both the east and western hemispheres. We, as a modern culture, love extraordinary abilities - fantasies of which allow us imagine how it might feel to be special and unique compared to our peers.

Charlotte, which isn’t actually the name of any character in the series, is an anime where specific teenagers gain extraordinary abilities. We first follow a prime example of an unsavoury character, Yuu Otosaka. Yuu has a rather special ability - at a glance it is completely useless, but it does have its advantages. If he focuses on someone within visual range, for a period of five seconds Yuu can inhabit their body; however when he does his own body collapses into a lifeless husk. While this doesn’t sound useful, Yuu manages to use it to cheat on exams, escape fights and win at life iin general... at least until he gets caught by the oddly enigmatic Nao Tomori. Like Yuu, Nao also has a bit of a weird power. She can turn herself invisible to a single person, and she catches Yuu cheating by following him with her video camera. Eventually, through the power of her persuasive nature (aka blackmail) she recruits Yuu into the Student Council of her school, which is designed to protect and monitor those with potential abilities. The Student Council itself is tasked to find those with abilities and warn them of the danger of using them in public.

What dangers could exist for those with powers? As a famous author once said, with power comes great responsibility, and with power comes jealousy and greed. Those without powers and abilities want to gain them from those who have them, and if they can’t be gained, then they can be manipulated. For example Nao’s brother, who has the ability to manipulate sound, was kidnapped by government researchers, experimented on, and then became dumbstruck and immobile. Nao is now a carer for her brother who is hospitalised. The experimentation which was undertaken on her brother, and the condition that he was left in, forms the basis for Nao’s motivation to stop the same from happening to others’ with emerging and fully formed extraordinary powers.

The familial relationship also increases the likelihood of these powers forming. If one member of a family has emerging powers, it’s likely that the other children will. Does this mean that Yuu’s tomato sauce obsessed sister will also have similar abilities?

Charlotte’s writing and direction style might be familiar to some. Fans of Angel Beats will recognise the writing style as they share a common creator, and Angel Beats, known for its quite... dramatic moments, is a yard stick for Charlotte as the series starts as a somewhat odd slice-of-life series, transforming rapidly into something much darker. I won’t say too much, but Charlotte manages to fit in a lot of charm, twists, drama and character introductions in these first seven episodes.

While we're talking episode counts, I would like to mention a quick issue - the splitting of this title with seven episodes to a release across two collections for a thirteen episode series. Even with a dual format release, it is not a release format which I really approve of personally - after all, it was this which also gave us the joys of four collections for the second season of Sword Art Online. However, clearly its acceptable to some as sales went well, and of course the source for this strategy can be traced back to Aniplex USA's own release strategy for the title.

Compared to its streaming release, the Blu-ray has been reworked a little. Animation quality is better and the length of the release does suit the storytelling and pace of the narrative. Episode seven is a very good place to split the release, that’s all I can say.

I have found myself to be quite amused by Charlotte. While playing with some quite strong narrative hooks, the series manages to keep some elements of fun in amongst the heartache and pain, which I think is rather important as it was this that kept me drawn into the series and the characters. In amongst the capture of pyrokinetic idols, telekinetic baseball players and those who can fly, the series certainly keeps the pace moving quickly.

Charlotte is a series which keeps you on your toes and is rather interesting - if you are a fan of dramatic supernatural series or you enjoyed what Angel Beats had to offer, then give Charlotte a try.

English and Japanese stereo audio with English subtitles. Extras consist of web previews for episodes 1 to 7, "Beginning of a New Destiny" featurette and textless endings.