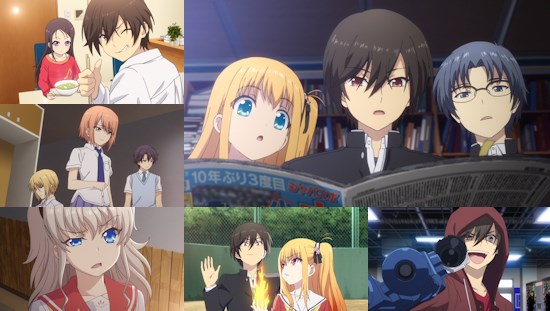 The opening three episodes of Charlotte were, to put it simply, stupendous - a keen eye for comedy with a helping of emotional drama from the pen of Jun Maeda of Clannad and Angel Beats fame. Of course, given the creative mind involved we could guess the overall trajectory of the series and the direction it might head, but even that prior knowledge of Maeda's work couldn't prepare us for everything that was still to come from this serious.

It's a little while before the series truly begins to show its hand, as it spends some time continuing down its "superpower" of the week path, introducing a new user of a unique power each episode and sending Yuu, Nao and company on a mission to dissuade this individual from using their ability lest they come to the attention of some unsavoury sorts who would happily use them as guinea pigs in a lab. For the most part this setup works wonderfully - the rapport between the members of the student council is played for laughs joyfully, and the stories of those they meet are enjoyable to watch. There is, however, an early indicator of what ultimately becomes the show's greatest enemy, as a story which should rightfully take up a couple of episodes is squeezed into one, robbing it of much of its pathos in moments which should be emotionally charged or outright touching.

What is so amazing about Charlotte's scope is that this isn't even a fraction of the story it wishes to tell, and by the end of it we've been treated to a story of one boy's repeated fall from grace and redemption at another's hands, time travel, death, blackmail and a plan that involves not just Japan but the entire world's ability users. Oh, and a touch of romance as well - this is a Jun Maeda story, after all.

With so much for the series to get its teeth into, it's truly impressive how much Charlotte manages to squeeze into thirteen episodes - there's no dead air or pauses for breath as each major twist and turn links directly into the next to make for a multi-faceted rollercoaster ride that is almost without compare within the sphere of anime. This is a story that has a lot to say and many tales to tell, and that it manages to deliver on its goals at all is worth of praise.

However (and you knew there was a "but" moment coming, didn't you?), the scope of the series is simply far, far too much for a single cour, thirteen episode to handle, and it shows throughout the series as pivotal moments that should impress upon the viewer hugely fly by as if they were a trifle, stripping them of much of their impact and import. That early episode that rushed through its story was simply an early indicator of Charlotte's wider problem of needing 24 episodes to achieve what it tried to pull off in thirteen, but those issues become more marked as the stakes rise.

One episode in particular exhibits the problem perfectly - events within the series push Yuu off the rails in spectacular fashion, and we spend an episode watching him sink deeper into the depths of his own self-loathing and despair. This should then be paired with an episode that seems him brought back to reality and given an opportunity to redeem himself, but the series has no time available for this so he's effectively saved from himself in two minutes flat by a plate of food. Yes, you read that right, post-traumatic stress and depression are fixed instantly by a good meal. No, that isn't a satisfying resolution at all to a fantastically depicted series of events that would otherwise have been the show's highlight.

This is an issue that goes on to plague the series time and again - don't get me wrong, as a whole it's entertaining and satisfying to watch, but you can never quite escape the feeling that there's always an extra layer of emotional depth missing from the show; depth that could be explored if only there was time to do it. It's a problem that (to a lesser extent) hurt the last Jun Maeda and P.A. Works collaboration Angel Beats, but it's a lesson that has been entirely ignored here to the detriment of its story.

Away from that major issue, the rest of Charlotte is a polished affair - its animation doesn't always manage to live up to its most beautiful moments but is mostly impressive, and the voice cast all sell their roles with gusto from beginning to tearful end. The only fly in this presentational ointment isn't the fault of the production at all, but rather Crunchyroll's (Aniplex-provided, we believe) English subtitles, which are varying degrees of terrible throughout the series to present a frustrating distraction from on-screen events at times. We don't even find the need to take umbrage with streaming anime subtitles, which should tell you just how poor the translation of this particular show is.

The hard part about summing up a series like Charlotte in its entirety is separating what it ultimately offered the viewer compared to what it could have provided in an ideal world. Given the space and time to breath, this show could have been spectacular - the scope of the story it wants to tell is incredibly ambitious, and the fact that it made even a half-decent fist of it in a short overall running time is well worthy of praise. As it stands though, too many of its core elements are left short of time to exercise their full emotional and narrative impact, and that often leaves it feeling flat and lifeless at times when it should be at the peak of its powers.

Let the records show that Charlotte is a pretty good series; let those who watched it reminisce about how it could have been incredible.

You can currently watch Charlotte in streaming form on Crunchyroll.

7
Charlotte is a series with an ambitious scope almost beyond compare, but it simply doesn't have enough time to do it justice.
LATEST REVIEWS