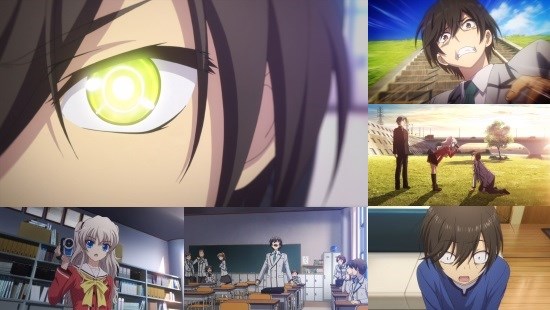 Ever had one of those days where you wish you could change everything about yourself and adopt a different persona? Maybe you've thought about how great it'd be if you could be a completely different person and take over someone else's life. For Yuu Otosaka this dream can be his reality. For as long as he could remember he's had the ability to possess people's bodies and live his life through others. Being the self-obsessed narcissist that he is, Yuu mainly uses this power for his own self gain. With the aid of his power he manages to cheat his way into the best school and achieve the highest grade point average in the year.

Having said that, thispower comes with a lot of drawbacks - mainly the time limit of possession being restricted to five seconds and leaving Yuu in a vulnerable state where he appears as if he's fainted. His constant use of this power doesn't go unnoticed, which causes the charade and false life Yuu has built for himself to come tumbling down in spectacular fashion, leading to Yuu having to associate and live among others with special abilities, which much like our protagonist have their own quirks and limitations.

Within its first episode, Charlotte gets off to a very strong start by providing a rather comedic and unorthodox approach to superpowers. Yuu represents that selfish desire that most of us have and the self-serving aspect of being in a position of power that is not often shown with superpowered abilities. Rather than use his power for the good of mankind (as one often does when such powers are involved), Yuu uses his power for his own amusement and self gain. This leads the way into the other aspect of the protagonist - that his power and narcissistic tendencies are the main basis of his personality. The main focal point of this is showing the lengths Yuu goes to with his powers in order to achieve everything he wants. Coupled with some key scenes, this paints Yuu as an anti-hero and rather comical parody of other series protagonists who use their wits and tools at their disposal to have things go their way. Once Yuu is unable to use his powers to get save himself from the predicament he finds himself in, he is shown to be unable to cope and just accepts the situation with very little resistance.

Here is where Charlotte introduces its eccentric cast of characters with some equally bizarre powers to match their quirks. While getting to know these characters, Yuu and the viewer are shown how the concept of powers are handled in the series. This mainly pertains to the rules that people who develop abilities need to adhere to, easing the first set of episodes into a routine where the characters learn about the existence of person who uses abilities and go to track them down via some rather standard investigation work. Interspersed into the mix is some comedic moments and displays of abilities mainly used in order to assist the characters with their line of work. While this aspect may be the at the forefront of the show there are some asides that hint at a more deep-seated plot that is yet to unfold.

The main aspect of this side of the series is the main cast's back stories, most of which revolve around family members who have disappeared in some form or another. This is shown by disappearance, death or complete mental breakdown. While the show has mainly dealt with comedy in its world building these moments, while more dramatic in tone, blend in rather well with what has been displayed so far. These more serious moments really give weight to what is happening and allow the audience a chance to get to know the characters better and understand more about the situation at hand. The way these moments are blended in it gives the impression that they will be expanded upon later in the series, and will also tie into very key moments later.

Overall, Charlotte takes a unique perspective on a premise that has been seen before in other works. By showing a selfish use for a power and the immediate consequences of misuse it leads the way into a comedic situation with underlying dramatic tones. With a cast of eccentric characters, bizarre powers and interesting moments. Charlotte is a series that has a really fun and interesting start that shows a lot promise and potential.

You can currently watch Charlotte in streaming form on Crunchyroll.

9
A fantastic introduction to a comedic and subtly dramatic take on superpowers that has a lot of potential.