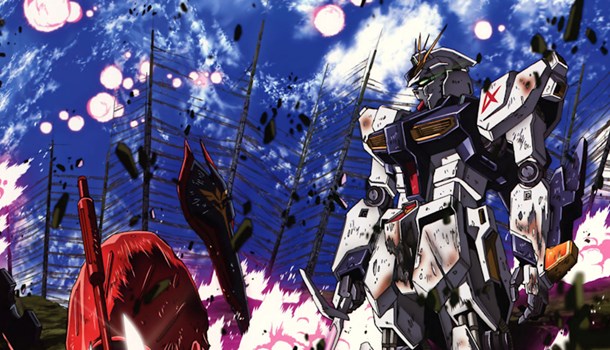 It's time for the big smack down! No, really it is. The relationship between Amuro Ray and Char Aznable in Gundam is just like WWF. In the fourteen years (or three Gundam TV series) since they first met they've mostly fought against each other, sometimes teamed up against a mutual enemy but always done a lot of shouting and grimacing.

No idea who I'm talking about? Then I really can't recommend Char's Counter Attack to you. This film relies on you knowing who the main protagonists are and why they all seem a little crazy. One of the key elements to this film relies on you knowing the fate of a lady called Lalah Sun from the first Mobile Suit Gundam TV series. If you know nothing of such things then chances are that you're not in for a good time.

Even though this film is two hours long, the story moves from place to place too quickly for most people to grasp where the characters are at any one time. So little time is spent at each location that sometimes I was left wondering why they had gone there in the first place. In some ways the pacing reminded me of the movies made from the original Mobile Suit Gundam series, as it felt like there was enough material in this film to make another TV series.

One thing I have to say about this film though is how cool the action is. My first viewing of Char's Counter Attack was ten years ago at a anime convention in raw Japanese - with no knowledge of any Mobile Suit Gundam series at all. Even though I had no idea who any of the characters were or what was happening, I thoroughly enjoyed it. It's clear that after three TV series the creators definitely knew how to make action sequences in space look good along with fantastic mech design. Without my realising it, this film turned me into a mech-head.

The quality of the animation compared to the original TV series looks significantly better. Indeed it looks just as good as current TV animation, just less shiny. The DVD transfer is reasonable with plenty of sound options but apart from the original film trailers that's it as far as any extras go. This review copy didn't come with any sort of insert of booklet which to my mind is sorely needed. It would be really useful to have accompanied this film with some background character, world and story booklet. I hope the full release version has something.

I would recommend this film to any mech and/or gundam fan, but be warned if you haven't seen any of the Mobile Suit Gundam TV series before it's more than likely you will end up a bit confused.

5/10 If you have never seen any of the Mobile Suit Gundam TV series before.
8
For those who have seen their fair share of the original Gundam series and follow ups.
LATEST REVIEWS