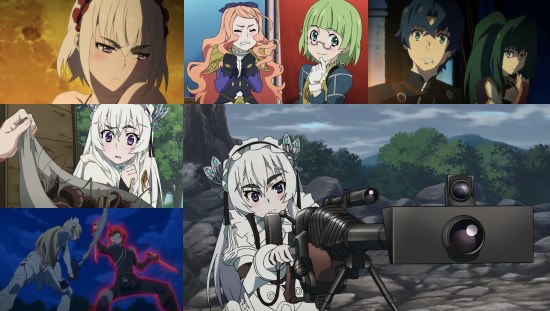 If you've watched or read any fantasy story, then you'll probably know how the scenario typically plays out - an evil ruler wreaks havoc upon the world, and the story in question follows a band of brave heroes as they seek to take down said ruler and bring peace to the land, usually in a suitably impressive climactic battle.

Well, you can forget about all of that in the case of Chaika: The Coffin Princess - by the time the series begins the evil emperor that has ruled over his land with an iron fist is already dead, his magic-infused body broken up into pieces which are scattered amongst the brave heroes who defeated him less leaving them in one place grant him an opportunity for resurrection.

All is still not well in the world however, for Emperor Gaz (yes, I know that's a second-rate name for a malevolent ruler, unless you're the Emperor of Essex) has a daughter - Chaika, who has seemingly been tasked to wander the land assembling her father's body parts. Needless to say the powers that be aren't too thrilled at this prospect, and the world is on high alert - Chaika must be stopped at all costs for the good of the world.

This concept of Chaika as a grand threat to the stability of the world seems at odds with the individual we first meet however - she wanders lost and seemingly defenceless in a dangerous forest, lugging an unwieldy coffin around and speaking in half-formed sentences. Throw in some distracting eyebrows and there seems to be nothing malicious about this girl at all, and it's largely on this basis that a brother and sister team of out-of-work saboteurs Toru and Akari fall into her employ and help her collect her father's remains, which she insists she simply wants to gather so that he can be properly laid to rest.

So the scene is set for a pretty run of the mill arc-based fantasy series - Chaika and her crew identify their next target believed to harbour a body part of her deceased father, before trying to peacefully and then (more often than not) violently claim this body part back before moving on to the next. Each opponent has their own story, some interesting and some decidedly less so or simply not adequately explored, while the show's grander plot becomes more complex thanks to the appearance of others on a similar quest who also claim to be Chaika, all of whom have very different ideas of how to go about their grisly business.

What elevates the series above mediocrity is its characters - Chaika herself is the kind of protagonist who would grate in the wrong hands, but there's something genuinely charming in her earnest efforts to realise her goal while still standing true to her beliefs, and her initial clumsiness belies a dedication and craft at her disposal when required. Her personality also sits well alongside Toru and Akari, who both bring something to the table to create a well-rounded main trio, even if Akari's overbearing love for her brother becomes an overplayed gag throughout the series. By the end of the show we have some other important additions to the cast that really helps the series flow into its closing arc in some satisfying ways.

Visually, Chaika: The Coffin Princess looks like a pretty bland affair, but in fact this is a series that keeps its powder dry for when it really needs it - there's nothing spectacular on show much of the time, but when things get busy and fights break out a lot of attention is poured into those scenes to make them fantastic to watch. This careful balancing of adequacy in its normal animation quality and intense focus on its big set pieces stands the show in good stead, and it's something that other similar series that have struggled to manage this mix could learn a lot from.

There is one glaring issue that the show does struggle with in terms of these set pieces however, and it's Chaika's magical gun - it looks cool, heck it is cool, but its ability to produce whatever magic is required to remedy any given problem or claim victory in any situation drains the show of a lot of its dramatic tension. Whenever things get tough for Chaika and her friends, you can always rely on the deus ex magica to come to the rescue, and when you pair that with "baddies" that aren't often all that bad when push comes to shove there's nothing in the way of nail-biting tense moments to be found here when you suspect that there really should be.

We have no qualms with the presentation of this UK release of the series - subtitles are fine and seem accurate throughout, the preferable Japanese language track is all present and correct, and the English dub is the kind of drab cavalcade of phoned-in performances we've come to expect from Sentai Filmworks of late (at least try to sound like you're putting some effort in, guys!) but it's passable at delivering the story when push comes to shove. You could probably argue that the NTSC DVD release of the series is adequate to carry the show's visuals, but its fast-paced action still makes the Blu-ray edition the preferable choice in our minds.

Taken as a whole, I was initially a little torn on Chaika: The Coffin Princess. Its narrative is solid if unspectacular, and the series gets by largely thanks to a dose of charm afforded its main cast of characters which is enough to carry it through as an entertaining viewing experience. However, when coupled with some strong action scenes and a broader narrative throughline that has kept my interest sufficiently to want to watch the show's second season to see how (and if) things resolve themselves, it seems fair to see that there's more than enough value to watch the series brings to the table to make it worth your time.

The main question mark over the series for me is in its rewatch value - this may not be a show you want to watch more than once, a ponderance worthy of your consideration when it comes to picking up this home video release. If you're happy to pick it up simply to watch it once, or think it's a series you'll want to revisit however, then you might be grateful (as Chaika herself might say) to pick up this release.

7
Its baseline story might not be all that impressive, but there's enough charm and character to this series to overcome those limitations to provide an entertaining whole.
LATEST REVIEWS