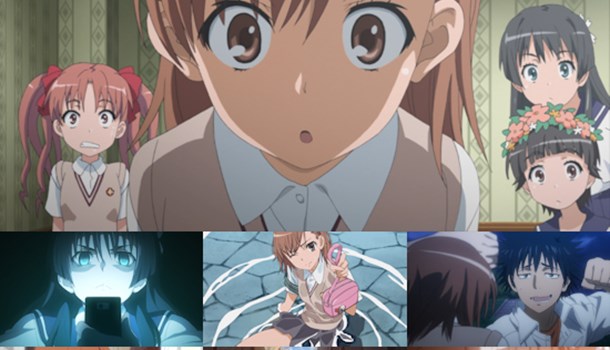 Having spent a series watching Academy City's world of science and physics encroached upon by magic, it's time for its city full of student espers to take centre stage in the form of A Certain Scientific Railgun, J.C. Staff's adaptation of the popular manga spin-off which builds markedly on the setting introduced within A Certain Magical Index.

Our star here is one of Academy City's few top-ranked "Level 5" espers, the so-called Electromaster known as Mikoto Misaka - not that she dominates proceedings however, as she's joined here by both roommate Kuroko Shirai and fellow Judgment member Uiharu Kazari, as well as powerless Level 0 Saten Ruiko. If you aren't familiar with any of these cast members from A Certain Magical Index then fear not, as the opening episode to this series sets up their personalities and abilities perfectly with a blend of fun and action that will most likely hook you from the outset.

It's the work of both Kuroko and Uiharu within Judgment - ostensibly Academy City's student-manned police force - that provides most of the narrative beats for this series, as the duo find themselves investigating a number of cases which invariably leads to the involvement of their friends in proceedings, either via invitation or out of sheer bloody-mindedness. This setup begins with relatively low-key incidents of unrest within the city, but these seemingly stand-alone episodes ultimately prove to be symptoms of a wider, and far more malicious, force at play that threatens to be beyond the capabilities of even Misaka to thwart.

The first half of A Certain Scientific Railgun provides a highly successful blueprint which the series does well to follow throughout - it crafts short, single episode stories that are compelling in their own right but also provide threads into the big picture of on-going events in a way which feels organic in their progression. This trajectory also allows plenty of time for character development amongst the main cast, both as individuals and as a group - episode three for example is a great example of the quartet working together as a team, and the end of the show's first arc provides an excellent denouement but not before digging into Saten's place in the world as a Level 0 in emotional fashion in the process.

After a breather provided by a rather tacky (but still pretty fun) swimsuit episode, the second half starts with the small slow build - what seems to be an isolated story about organised gangs of Level 0's known as Skill Out turns out to be a pointer towards another large-scale issue looming over Academy City as frequent earthquakes prove to be something not only man-made, but rather more malicious. Again, this story ends in wonderful fashion via a stunning action-packed finale, while also wrapping things around to the first half of the series to ensure that the series feels like a coherent whole.

It's this care and attention to detail that really helps A Certain Scientific Railgun stand out as a great series - it has a strong starting point thanks to the fantastic world-building inherent within the premise of Academy City, but it still has a lot of work to do to create a compelling show and does so with aplomb by making sure that no character moment or occurrence within this world is wasted. The result is a series that feels like a series of glimpses into a vibrant, living and breathing location - the kind that carries on before the series begins and long after it ends.

Of course, it helps that the characters themselves work well as individuals as a group - the blend of Misaka and Kuroko as powerful espers and the physically weaker but still valuable Uiharu and Saten gives the series plenty of scope for variety and uses it expertly; it's just as fun watching Saten running around with a baseball bat as it is watching Kuroko using her teleportation ability to bring down a building, and seeing Misaka's titular railgun put to full use is just as awe-inspiring as watching Uiharu outsmart an enemy using the computers at her disposal. Add in some brilliantly depicted emotional moments across the cast and you have yourself a show that isn't just spectacle - it'll likely move you to tears on occasion into the bargain.

With the requirement for some impressive action set pieces requiring some carefully handled animation, thankfully this series is no slouch in that regard - sure, it'll never trouble some of anime's most glorious shows visually, but it's a solid effort throughout that pulls off everything it attempts with relative ease as it jumps from action to mild fan service and onward to those dramatic or emotional moments. We checked out this UK release on Blu-ray, and although some cuts of animation are clearly animated significantly below HD resolutions as a whole the series looks great and its Blu-ray presentation is faultless. Much like A Certain Magical Index, this first series of Railgun also sounds great thanks to a strong soundtrack and enthusiastic voice cast. The English dub of the series is relatively unremarkable but works well enough to convey everything required from it, so regardless of your choice of language you'll be well-served here.

The smart thing about A Certain Scientific Railgun is that it takes all of the strengths of the series it spins off from, applies a laser-sharp focus to those strengths - the core premise of Academy City and its most notable characters - and then builds some great stories around them whilst also further bolstering its likeable cast. If you had to fault the series for anything it's the fact that the major plot points of its narrative are slow-burners, but when there's so much more to enjoy and given the ultimate pay-off of these stories this is hardly a major issue provided you're willing to be patient and luxuriate in its quieter moments.

Spin-off series are so often craven cash-ins or lazy attempts to offer a different angle on a familiar story, but in contrast to that A Certain Scientific Railgun is exactly what this kind of work should be - fresh, vibrant and clever in both its original content and what it chooses to borrow from its parent series. Even if that parent series didn't grab you, this first season of A Certain Scientific Railgun is a superb series that proudly stands alone as a character-driven tale of emotional drama, detective work and high-stakes action that is hugely enjoyable from start to finish.

English 5.1 and Japanese stereo audio with English subtitles. Extras consist of US cast commentaries for episodes 3, 6, 17 and 24, along with clean opening and closing songs and a US trailer.

9
A fascinating world occupied by strong characters and supplemented by some well-delivered stories - this is a spin-off that surpasses its parent series.
LATEST REVIEWS