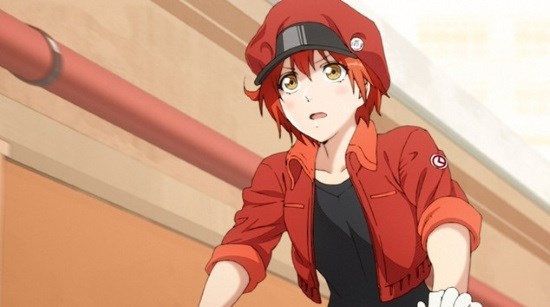 The human body is a fascinating machine whose inner workings are truly a mystery to most of us. Fortunately for us all in biology, as in all things, anime is here to teach us all we need to know (and convert the yucky bits into cute anthropomorphised girls). That's right folks,the anime adaptation of Cells at Work is here and y’know, it's pretty special.

Red Blood Cell is new at her job of ferrying nutrients about the confusing pathways through the body. It's not helped that she's a bit of a ditz who constantly gets lost and doesn't really know what's going on or how things work. She's also a colossal trouble magnet and everywhere she goes she's constantly finding herself beset by the legions of viruses and bacteria that are attacking the body. Good thing for her then that despite the staggering number of cells in the body, she keeps encountering White Blood Cell who simultaneously protects her and teaches her the ways of the body's immune system.

Those of us of a certain age might remember an old cartoon series called Once Upon a Time…Life. If you do then you’ll find things here oddly familiar albeit with a bit of a moe twist. Like that show, Cells At Work is edutainment at its finest with everything from the characters themselves to the narrator to piles of on-screen text constantly supplying you with a stream of information about what each of the characters represents and what their real-life functions are. Interestingly, whilst in Akane Shimizu’s original manga this quickly became a little tedious and bogged things down, here however it really works and the story merrily flies along mixing in a few great visual gags and lashings of gore (though admittedly we’re thankful that the names don’t get pushed too much as they quickly become complex enough to make you’re eyes boggle).

The character designs work brilliantly here and you can bet that by the time the next con rolls around there’ll be loads of people dressing up as choice characters from the show. White Blood Cell’s monochromatic design stands out from the crowd and helps Red Blood Cell’s super cutesy design really pop. Meanwhile the childlike platelets are utterly adorable as they carefully go about their duties as the pretty Macrophage maids look on until it’s time to get down to the business of grinding germs into a bloody pulp…

Is it odd that the level of gore in this show is weird? It matches with the anthropomorphism of everything else but when you think about it all does it mean that Red Blood Cell has a whole body of even smaller Red Blood Cells wandering around inside her…. Perhaps its best not to think too hard about it or you might need a lie down.

Production duties are being handled by Studio David best known for of all things, Jojo’s Bizarre Adventure (and more importantly one of the recently announced new Strike Witches projects) and they do a brilliant job in bringing this world to life in a relatively simple yet vibrant style that really shines alongside the character designs. The voice talent is on form too with the prolific Kana Hanazawa (most recently featured as Shirase from A Place Further Than the Universe) as Red Blood Cell and Tomoaki Maeno bringing some nuance to White Blood Cell's otherwise monotonous performance.

Four episodes in this show is proving to be one of the best of the season (and may even be a contender when anime of the year discussions start floating around). This is definitely a show that should be on your radar for both entertainment and educational value. You won’t be disappointed!

8
Why didn't they teach biology this way when I was in school?