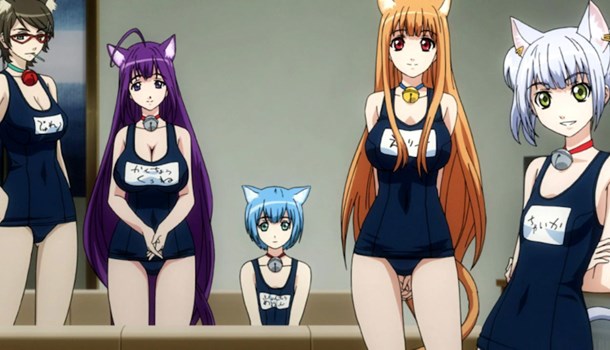 In my universe, a good television programme is one which is both entertaining and mentally fulfilling. If a series has the ability to grip my attention, present my tired mind with interesting, likable and well-fleshed (pun intended) out characters and leaves me craving for more at the end... well goshdarnit, that series is quality. In my possession I have a pile of anime which I consider to be worthy of repeat viewing on an annual or bi-annual basis. In this pile sits such classics as Witchblade, Scrapped Princess, Last Exile, Spice and Wolf, Tenchi Muyo, my collection of Mamoru Hosoda films, and a lovely little series called Cat Planet Cuties.

As you can probably tell by the rather apt name, this series stars lots of hot girls, who just happen to be alien catgirls. The original series name, which translates to “Let’s go play” (Asobi Ni iku yo!), also raises the eyebrows of those of us with less than clean minds. Between these names, the rather fantastically lewd box art and the summaries on the back of the box that involve the words, “frisky”, “curvy”, “kitty” and “play” in a single sentence, it doesn’t take a genius to realise that this series is going to be sexy, bouncy, and definitely not one to show to your parents or a small child. However, there is more to this series than just horny buxom catgirls from outer space, and there are an awful lot of those. Rather, the series is a tale of intergalactic peace, cultural differences, dogs, and how the luckiest bloke in the whole damn universe said no.

First contact with an alien species was never going to be easy. With a society such as ours split into many factions, governments and organisations, the receipt of an message from outer space proclaiming to the world that not only do aliens exist, but they are coming to play, was not going to be dealt with lightly. In fact, the first contact with the emissary from Catia (the cat planet) is rather anti-climactic. Ever the curious cat, Eris, our young and beautiful emissary, is found eating at a community buffet shortly after she lands on the Earth. The people sharing the buffet with her don't actually seem to give a damn that she has animated ears, a long red tail, or the fact she is openly discussing her origin from outer space. Nope, they are just eating food, drinking beer, and having a damn good time. This is where our male protagonist, Kio Kakazu meets Eris. Unfortunately for Kio, the beer he drinks has a bad effect, and he passes out.

The next morning, he finds himself with not only an apocalyptic hangover, but also with an Eris, sleeping half naked, on his bed. Admittedly, I am with Kio here and he rightfully reacts loudly. But it all sorts itself out quite quickly - Eris calmly introduces herself, and with this one moment the fates of Kio and the Catian Eris are intertwined.

It doesn’t take long for Eris' location to be revealed to the wider world, with Kio’s close friends Aoi and Manami secretly working for different organisations trying to capture, utilise or negotiate with the cat-eared alien. Kio’s new companion makes life a bit more interesting, especially as things turn hostile and Kio and Eris' lives are threatened. Unbeknownst to Kio at the time, both Aoi and Manami are expert gunsmiths and they both assist in Kio’s rescue, but unfortunately Eris is captured in the process. This is where the world realises how advanced Catian technology actually is, and the rather revealing outfit Eris wears all the time turns out to be a power assisted suit. Whoops.

What follows is an attempt at swimsuit diplomacy as the Catian mother ship arrives at Earth following a very positive report on grilled meat filed by their emissary. (in the assumption was that good grilled meat equals a decent civilisation) - I have yet to see any politicians decline an invitation of peace offered by five beautiful catgirls in swimsuits. The reasons for the swimsuits are actually highly amusing and are due to simple cultural misunderstandings. These cultural misunderstandings are actually the cause of most of the very funny moments in the series and provide an offset for the occasionally gratuitous fan service. One of the more memorable instances of cultural misunderstanding includes a fantastic episode opening involving a sauna, the Swedish tradition of bathing in snow, and the Catian crew…

You’ll be glad to know that the DVDs make use of the uncensored masters at this point. Totally. Worth. It.

Of course, it takes a lot more than just catgirls, tits and fan service to keep the attention of the average anime fan with any discerning taste. Having a morsel of story or character development helps. Cat Planet Cuties presents an interesting twist when it comes to story expectations for a fan service rich series, in that it actually has one. No, really. You see, although the Catians thought they were making first interstellar contact with humanity, it becomes evident rather quickly that actually they weren’t. The Dogs got there first.

Yes, Dogs. Don’t laugh, because the whole Cats verses Dogs trope actually works very well as a plot device. The Dogisians, unlike the Catians, chose not to become all friendly and open with humanity. Actually, it was less of a choice, more of a necessity due to the Dogisians being subjected to intergalactic sanctions. The Dogisians work in the background, influencing specific organisations with advanced technology and manipulating global politics. When the Catians appear, Eris first, followed by the rest of the scout party, the Dogisians, in a bid to maintain their technological hold over humanity, decide to get a little bit violent and do away with those meddling cats. This classic story offers plenty of opportunities for the busty Catians to fight against the cute android forces of the Dogisians in battles which grow in eloquence and ludicrousness as the short series continues. Unfortunately for our protagonist, Kio, his female friends and the rest of humanity are dragged into this dogfight (I see what you did there! - Ed) as the fight escalates from simple fighting on the surface to outer space. This story is merely the backdrop and the motivation for the series, and what actually sits on top is accessible, funny and is a different take on the classic harem anime trope.

The format for the series and its length is its only undoing. Although based on a light novel format, the episodes tend to be rather random at times, with the stories changed somewhat from their source to maximise the availability for fan service. But, I suppose, if your series’ unique selling points are the beautiful alien catgirls on the front cover, then content be damned! One thing I will add is that the episodes tend to be quite re-watchable, especially when Aoi discovers the simulation room on board the mother ship. Very cute.

The message I am giving above is very mixed. On the one hand, Cat Planet Cuties is a fun and easy frolic into a world where aliens have cat ears, tails, and are friendly, but this a good anime doesn’t necessarily make. While the story is a little bit simplistic and lacking at times, the strong likable characters in amusing situations makes up for this. The series doesn’t have anything to offer the female of our species unfortunately due to the lack of any male crew among the Catians. There are reasons for this, but that in itself is a long story.

One of my personal recommendations is to give the English dub of this release a chance. For one, it is absolutely hilarious. Cat puns are flung left, right and centre all the way through the series, and it’s obvious to me that the actress playing Eris is enjoying her job way too much. In fact, keeping a straight face at all while watching the dub is actually quite a challenge at times. However, a full Japanese dub with English subtitles is available, which is much more serious. The sound track is very happy and cute, with the exception of episode nine which is superb and does bring a bit of a tear to my weary eyes.

Animation wise, as expected for a series with such prominent selling points, the detail is focussed on the important things. It’s all ears, tails and tits. Actually, although the quality does vary at times, the animation is fluid and quite imaginative, especially aboard the Catian mother ship, even though it’s quite obvious that the set artists have watched a fair amount of Star Trek.

To summarise, Cat Planet Cuties is not for everyone. It’s sexy, cute, fun and full of girls who will give you an awkward feeling. It is, at least for me, the perfect solution to a stressful day/week/month at work and leaves you with a smile on your face. Because of this, it will remain on my personal favourite list, and I recommend that anyone after the attributes above give it a shot.

English and Japanese audio with English subtitles.  Extras consist of commentaries for episode one and nine and clean opening and closing credits.  The OVA episode for the series is also included here, featuring Catgirl Strip Poker… or the equivalent of. Worth watching as it is highly entertaining!

8
Busty catgirls from outer space. My cup of tea.