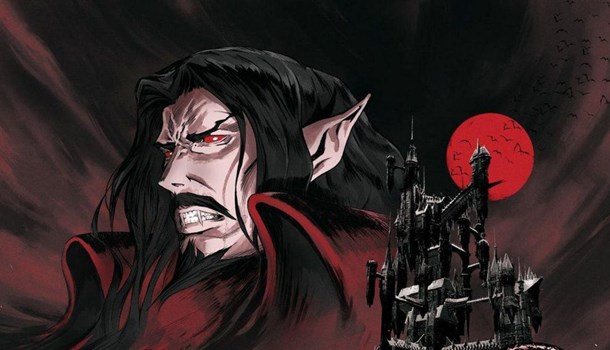 Wallachia, 1455. Lisa,  young healer, approaches the gates to the fortress of the legendary Vlad Tepes - Dracula – to petition him for access to his library of advanced scientific knowledge, to better allow her to cure her patient’s ills. Impressed by her boldness and commitment in the face of a being such as himself, Tepes permits Lisa to train under him where in turn she helps rekindle the humanity he had buried. Eventually they marry, but 20 years later Lisa is accused of witchcraft by jealous clergy and burnt at the stake. Unable to save her as he had been travelling without the aid of his powers, Vlad condemns the people of Walachia to death a year hence, and to make their peace in the time he has given them.

Well now, that was an interesting experience, and one that has left me torn. On the one hand Netflix’s Castlevania animation is a top-quality production from a team that clearly have a love & appreciation for the source material. They've been given a decent budget to work with, which also shows in their choice of scriptwriter, Warren Ellis (Transmetropolitan, the Authority, Planetary, Secret Avengers and Moon Knight to name but a few of his works). Similarly the voice cast is stellar and includes genuine luvvies like Richard “Thorin Oakenshield” Armitage and James “Gaius Baltar” Callis.

Available on Netflix and now bought to retail shelves by All the Anime in a standard Blu Ray format alongside a special edition, the question has to be; to buy or to stream? Let's investigate.

The animation is equal parts gorgeous and horrific as the need demands. Highlights include the initial demonic massacre of the town of Tagoviste in the first episode, and Trevor Belmont's fight against the cyclops in episode 3 (and clearly the production team agree as the extras on the disc include sequential developments of both scenes, from animatics to completion).

On the other hand, this first season is just four episodes long, running barely 90 minutes, and is really just the opening act of a much larger story. Now, having delved into the production history of this show it does make a certain amount of sense – this first season was written by Ellis off of his own script for what was intended to be an animated feature, rather than a series, so given this was somewhat of a test-bed to gauge audience reaction to an animated Castlevania they opted for a shorter than usual first season.

Season 2 has the more standard 12 episodes and I will admit that having finally watched the series for this review (it’s been in my queue a while now) I look forward to getting through the next batch ahead of a third season.  My concern however is that it feels a somewhat slight a release. Thankfully the price-point does reflect the contents - £13.99 for the standard blu-ray or £24.99 if you want the Collector's Edition (with artbook and the usual All the Anime packaging), but it is something to be aware of ahead of purchasing.

As I said, this is a top quality production that is an excellent prelude for Season 2. Now I’ve never been a Castlevania guy, and have never played any of Konami’s multitude of entries in the series (no, seriously – before this the only Belmont I had any real experience with was the proto-Zapp Brannigan that was Simon Belmont in the old, old Captain N cartoon series – how’s that for dating myself?), but this really sold me on Trevor Belmont's journey back to heroism after his family – Wallachia’s defenders against demons and monsters – found themselves betrayed and excommunicated.

Richard Armitage’s vocal performance as Trevor is suitably world-weary, and he once again nails the whole “noble warrior trying to make like he doesn’t care anymore” schtick that underpinned his roles as Thorin Oakenshield and Guy of Gisborne, with Trevor leaning to the lighter end of the spectrum than either of those two characters. Graham Mactavish (another Hobbit alumni, this time the burly Dwalin, but equally has become known for his time in Outlander) makes for a soulful Vlad Tepes, one whose rage when his beloved is slain is tempered by what he considers an honourable act of mercy in giving his former people a year to prepare for the death he has promised them, as he banishes Vlad and embraces the side of himself that is Dracula.

James Callis (most well known for his turn as Gaius Baltar on the Battlestar Galactica reboot from  - checks notes – 2004?! That can’t be right…) doesn’t get a massive amount to do as Alucard, as he only appears at the tail-end of the fourth episode, but I’m encouraged by the prospect of him performing against Armitage’s Trevor Belmont in season 2.

Alejandra Reynoso is not a name I was familiar with but she imbues Speaker mage Sypha Belnades with a real jolt of fierceness that drives her desire to stand against the darkness afflicting the land, making her an equal amongst alongside Alucard and Trevor.

Rounding out the key members of Season one's cast are Tony Amendola (as The Elder of the group of Speakers Trevor encounters and also Sypha’s grandfather) and Matt Frewer (as The bishop, the delightfully nasty piece of business who really sets off the whole rampage by Dracula as he was the one who burnt Lisa at the stake), two genuine acting legends who bring some real gravitas to two characters very much flipsides of the same coin.

The story itself is pretty much a standard opening act affair, as Trevor Belmont embraces what his family once was, and gathers a team to take on Dracula. but it's told very well with some excellent visuals. Action gets pretty darned inventive, and there are a multitude of little touches that sell the world to you (I especially dug in the cyclops fight where Trevor's cloak gets caught in its gaze and he has to break off the bits that have turned to stone), and there are some great callbacks to the level design of the games it is based on in the more esoteric environmental and architectural choices the art team have made.

So all in all a good show, let down simply by its own (intentional) brevity. Now it is still on Netflix, and as a Netflix Original will likely be as long as the service is running, but if you simply want a physical copy for your collection, are a Castlevania fan, or don’t have Netflix so have no other way of watching it, then I can recommend it. Otherwise? Just save yourself some money and add it to your Netflix watch-list...