Castle of Cagliostro, The (Blu-Ray) 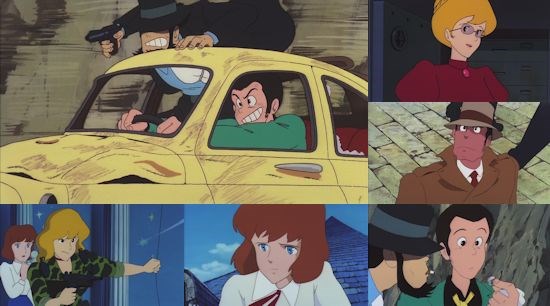 Castle of Cagliostro, The (Blu-Ray)

Although Takeshi Koike's darker, grittier take on infamous thief Lupin III earlier this year was undoubtedly a critical triumph for the most part, it is but a small slither within the history of Monkey Punch's manga creation and the various animated outings the characters within that creation have enjoyed.  One of the most well-known Lupin III anime movies came from none other than Hayao Miyazaki in his pre-Studio Ghibli days - given the attachment of his name as both the director and one of the screenplay writers of the film, it's no surprise that The Castle of Cagliostro has become a much-loved movie in its own right.  Now, thanks to STUDIOCANAL, we get to enjoy this 1979 outing in a shiny, new remastered form on Blu-Ray to see how it holds up over thirty years later.

It would be remiss of a film like this to begin with anything other than the world's greatest thief doing what he does best, and so it goes that The Castle of Cagliostro begins with a successful raid on a casino that looks to have landed Lupin and sidekick Daisuke Jigen a fortune beyond their wildest dreams.  Unfortunately for them, Lupin quickly realises that there's a major problem with their haul - all of the money is counterfeit; what's more, it appears to have been created as part of the renowned "Goat Money", a secretive manufacturer of such illegal currency whose quality is impeccable and its source unknown.

There's little time to ruminate over such things however, as Lupin and Daisuke become embroiled in a young bride being chased by some unsavoury-looking pursuers - ever beholden to a pretty face, Lupin sets out to help the girl, intervening to save her from capture.  Although this attempt isn't entirely successful Lupin is not cowed, and upon tracking the young lady and her captors down to the films titular castle, the race to rescue her also dangles the possibility of discovering the secret behind the counterfeit Goat Money, while the appearance of Zenigata means that arrest is never far away for our gentleman anti-hero.

The result of all of these machinations is an incredibly fun romp, punctuated expertly by superb set pieces from car chases to high stakes rescue attempts to create a thoroughly enjoyable larger than life viewing experience.  What was to prove to be Miyazaki's distinctive animation style is clearly on show in a formative, early sense here, ensuring that the action remains fluid throughout while also proving to be both distinctive and comforting in the way it depicts its various characters.  Set alongside such a larger-than-life adventure, the film's visuals walk the line between realism and the incredible with gusto to keep you hooked and immersed in its world quite wonderfully.

I have to confess that I've not seen any of the previous DVD releases of the film, so I can't speak to how much of a step up it is, but this Blu-Ray remaster of the film looks superb - a little jittery in one or two places, but otherwise gorgeous, crisp, clean and colourful with nothing to detract from its on-screen antics.  The film's audio is solid (although it does sound pretty dated in terms of its soundtrack in particular now), although sadly this release appears to be missing Manga Entertainment's "classic" English dubbing treatment of the film, leaving us with only the later Streamline dub which changes characters names (Lupin becomes "Wolf", most notably) for legal reasons while also deviating from the original script in other obvious ways.  In short then, you're best served sticking with the great original Japanese dub here and watching with subtitles enabled.

It might not have the messages or deeper threads running through it which can be picked out in most of Miyazaki's works, but that is in no way a detriment to The Castle of Cagliostro - sure, it lacks any sense of mystery or surprise, but you'd be hard-pressed to find many more competently paced and enjoyable action-adventure movies on the anime scene.  With a great-looking new transfer that peels back the years, the film still holds up well in its own right and seems likely to grab some new fans courtesy of this release - new fans of which I would now count myself amongst, having used this Blu-Ray release to check out the movie for the first time.  Provided you're happy to watch the film with its original Japanese audio track, this is a cracking romp.

English and Japanese audio with English subtitles.  Extras for the film include storyboards and trailer.

8
A worthwhile remaster of a hugely fun film could well open it up to a new generation of anime fans - regardless, it's a superbly pitched and paced slice of entertainment.
LATEST REVIEWS