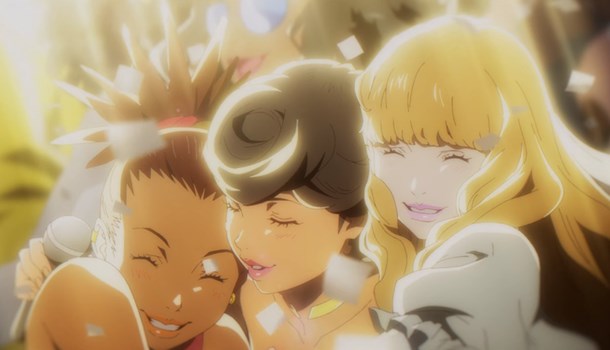 Carole & Tuesday returns to Netflix, riding high on Part 1 which ended with a (sort of) triumphant end to the Mars' Brightest talent show. With their names in the headlines and public interest piqued, can the duo survive their initiation into the music business? (Well, obviously they can because the voice over gives us that info, but HOW they do it is the hook).

There's less focus on the music in Part 2, at least up until episode 19. High drama wins the day, with lots of world-building and character arcs. Asshole DJ Ertegun (who I initially hated but came to love by the end) suffers misfortune and must claw his way back to the top, Carole makes a family connection, political intrigue moves to the fore and a crazy stalker is causing trouble behind the scenes. All in, the show really seems to move Heaven and Earth to ensure that every episode delivers something new, and that's rare in a medium of filler-arcs and multi-episodic battles. Carole & Tuesday clearly had a lot to accomplish in its first season, and it largely delivers.

The show is also surprisingly inclusive, so a word on that while we're here. It's clear that pop sensation Angela's mother Dahlia is transitioned, and the show also features a non-binary character in Desmond that's sensitively handled (and even well explained!), but at no point is it overbearing or preachy. More of this kind of inclusivity would be welcome in anime, where it's part of the worldview and not the focus. Bravo.

It also deals with issues of immigration, freedom of speech and personal expression, alongside commentary on artificial intelligence and the meaning of being human. That's a lot to pack into 24 episodes, and despite ultimately leaving you wanting more detail on what comes next, the point of the show is to get you to THAT moment, and it does this with aplomb. By the time we're treated to the finale song, Mother, you'll have an emotional attachment to everyone in the cast, and it all just gels perfectly to get an amazing crescendo which finished the series. Safe to say, Director Shinichiro Watanabe has done it again.

Having now seen the series through both parts, I've been fortunate enough to acquire the soundtracks which are now on regular rotation in the office. On-screen I have to say I found the first half stronger for the music - the Mars' Brightest show gave us a good mix of styles and voices to enjoy, with Light a Fire by Angela being the standout track for me. I didn't find the music in part 2 as engaging on screen (save that "We are the World" moment it ends on) but having listened to the soundtracks I'd say the second half actually has a better line-up.

Perhaps the first half of the anime made the bolder impression due to how fresh it was, or maybe the songs in the second half of the series took a backseat to the drama, but on audio alone the second album is stronger for me. Oh, and Ertegun is clearly a fan of Daft Punk if the sublime LIGHTS GO OUT is anything to go by.

The show had a lot more depth than I'd expected, bolstered by some genuine vocal talent powering you through - it deserves to be a major hit for Netflix, the mix of Sci Fi, slice-of-life and political intrigue take it right to the top of the charts.

10
A surprising, sweet and meaningful story, peppered with great tunes and an ending that felt wholly deserved.