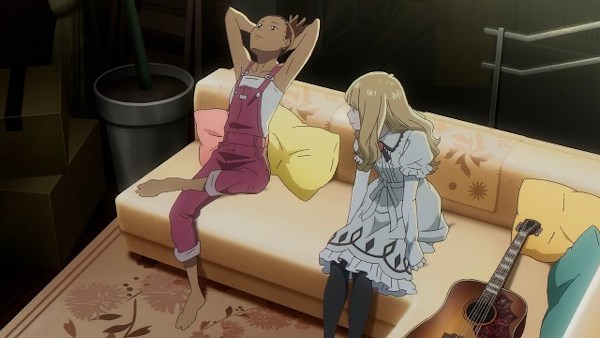 Tuesday is a rich-child runaway looking to realise her dreams in the big city, Carole is a plucky kid from the streets trying to get by with a series of unfulfilling jobs while working on her music. A chance encounter between the two sets in motion the rise of both to stardom on their home planet of Mars - it's time to shoot for the stars, whatever it takes!

I first wrote about the series on my own blog, where I watch the first episode of a series and then decide if it's good enough to solicit further viewing - few series have had me as intrigued as Carole & Tuesday, from the obvious talent behind the scenes to the music and animation on screen, it was clear that this series had a lot to give. I've now binged 12 episodes on Netflix, billed as "Part 1" (the show has 24 episodes in total, the rest have yet to drop) and I have to give the series credit where it's due, it handles the pacing and final act absolutely perfectly.

Let's start with the story - it's an underdog tale, pitching the soulful, natural melodies of the titular leads against Angela, a child actress-turned-singer with amazing 80's anime hair and I love her. Angela is working with an Artificial Intelligence specialist to manufacture the perfect pop songs. This of course is a perfect reflection of the modern day music industry, where singer-songwriters compete with manufactured pop cynically designed to occupy the charts regardless of artistic merit.

This rolls seamlessly into the setup for the latter part of the season, where the girls are entered into a loving homage to X Factor/Pop Idol called Mars' Brightest (oh yes, the series is set on Mars but that hardly matters in terms of story). This is animated genius - while the show does have a few flaws, and we'll cover those, let us bask in the glory of the acts competing on the stage...

Some are actually pretty good, others are bloody awful, but the moment the Mermaid Sisters rock up, exclaiming "we're not women but we're not exactly men either" you will be floored. I won't spoil it, but let's just say my reaction pretty much mirrored the animated audience before I burst out laughing. Rarely does an anime get a chuckle out of me, but this is freaking genius. Puerile, stupid comedy gold. Just watch, you'll understand.

The show finishes the first-half arc very neatly - there's some drama, tension, incredible music (Angela's "Light a Fire" is fantastic, the perfect antithesis to the soulful "Loneliest Girl" by the leads) and a satisfying finale. All in, the story, characters, setting and music are a delightful blend. DJ legend (if he does say so himself) Ertegun himself could not create a better mix.

On a more technical level, the animation is used smartly on the show, though it's easy to spot where savings were made - there's only so many times you can re-use the same still shots of crowds between performances before repetition sets in, and although it's common in real-life talent shows too, shots of speechless onlookers (be they judges or hosts) can only be animated from so many angles. It's a minor nitpick when the series provides so much beautiful design work in both surroundings and characters that you don't mind seeing them again. And again. Direction is strong and contains many memorable scenes and dynamic performances.

It's also a touch predictable, thanks partly to the narration telling you at the beginning of the series telling you that Carole & Tuesday become a phenomenon, so the chances of them failing are only ever going to be a minor setback to the stardom they'll achieve. Unless the series pulls a cruel gut-punch and ends with some sort of after-concert tragedy at the end, it's a good bet we'll be seeing a happy ending. But there's nothing wrong with feelgood every now and then.

The supporting cast is also pretty solid. From the hapless goofs supporting the pair to their rival Angela (who is actually very rounded, surprisingly) through the the judges on Mars' Brightest and the rest of the cast, everyone has a place and something to do. The show has a real depth and humanity to it that often made me forget I was watching an animation. The English voice cast do a great job, though subs are available. If I have one critique it's that the musical talent don't sound very much like the voice actors, though I'd rather it be that way than have good songs sung badly.

Speaking of, the music is arguably the strongest pillar of the show, and of a very high standard. Professional singers are used instead of the English or Japanese voice actors, with Celeina Ann singing for Tuesday and Nai Br.XX performing for Tuesday. Music was composed by Mocky at FlyingDog, the music production studio which is celebrating a 10th anniversary with the release of this series. Other artists include Thundercat, Alison Wonderland, D.A.N, Madison McFerrin and a host of others. The series really brings an A-game for musical talent.

Of course, Studio Bones is also using the anime to promote their 20th anniversary, and the love and care that's gone into the series is beyond contestation. Shinichiro Watanabe overseeing director duties (he of Cowboy Bebop and Samurai Champloo fame) the visual flare and effortless cool is pretty much guaranteed.

Carole & Tuesday is a classic underdog tale set against stellar design-work, an endearing setting (Mars looks awesome!) and grade-A music, there's a lot to love here. Studio Bones have created a series you can "Netflix and chill" to in the cleanest sense of the phrase. Turn on, tune in and enjoy.

10
An engaging cast and wonderful music, this is easily a contender for best anime of the year.