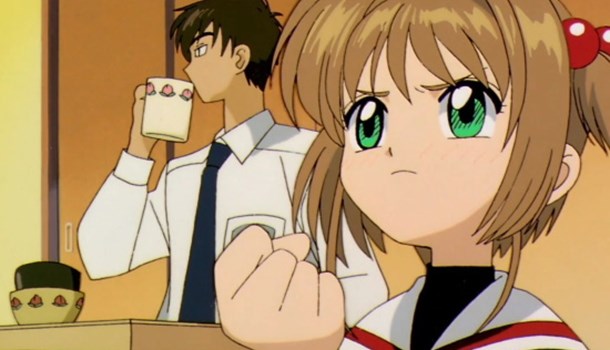 The magical girl genre has laid quite a few key milestones over the years. Sailor Moon of course for bringing the genre to the mass audience in the West, Madoka Magica for showing just how dark and depressing you can make the genre, Magical Girl Lyrical Nanoha for proving that the genre could be successfully made for adults and then, in the middle of all this magical girlishness, Cardcaptor Sakura burst onto the scene. Well, kind of anyway, given that it was most well known outside Japan in a badly hacked-to-bits format that was retitled "Cardcaptors" for American kids. The editors clearly decided that there could be no violence, homosexual themes or a female lead in an action show... Though we are still waiting for a physical release in the UK (despite various distributors hinting at it in the past) it’s finally available on Crunchyroll (and reported Funimation soon as well) and despite being and older show, the series is well worth your time!

Sakura Kinomoto is a more or less normal elementary schooler. She has a close circle of friends, a crush on an older boy and what she lacks in book-smarts she more than makes up for in her athletic abilities. Her life is about to take a sharp right turn however after she discovers a magical book in her father’s study and unleashes the powerful, elemental Clow Cards upon the world. Now along with the guardian of the book, Keroberos, (whose 30 year nap caused the problem in the first place) and her best friend Tomoyo, Sakura must reluctantly accept the role of the Cardcaptor and seal the cards away once more!

The premise of Cardcaptor Sakura sounds pretty typical for this sort of fare and indeed it is, but don’t be fooled as there’s a lot more to the series than meets the eye. For starters, the characters are really likeable and, despite the relatively minimal character development, they pretty much all grow on you very quickly. Sakura in particular is a polar opposite of characters like Sailor Moon’s clumsy, annoying and accident prone Usagi and is just about one of the most cute and lovable characters in anime.

The series is layered with a lot of subtext, in a way that is not only rarely dealt with today with such delicacy, but was all but unheard of back when the show was first released. How many 90’s kids shows had at least 6 gay or bisexual characters, most of whom are in leading roles? How many series of any kind can bring you to tears, not through some long-set up character death, but within the space of a few minutes as a character tries their best to fix a comparitivly small problem but still fails?

There are no villains in the series at all either which makes the job of the creative team even harder. The cards are mischievous, often dangerous but at the same time they function more as a device rather than anything with any real malevolence. Rather than actively trying to harm anyone, they mostly just act in defence of themselves. Even by the time a series of new characters roll up in the third season, the term ‘bad-guys’ doesn’t really fit.

Perhaps even more impressive is the fact that this is one of the very rare series that manages to be superior to the manga that inspired it. CLAMP’s works are very good but even though the 70 episode anime is essentially 90% invented TV filler, it’s been made with such care that there's no competition between the two.

The quality continues on the production side where, rather than take the easy route, the team at Madhouse chose not to use excessive stock footage meaning that pretty much every episode had to be done entirely from scratch (something which was more or less unheard of in a magical girl show!). Even Sakura’s equivalent of the transformation sequence is different in most of the episodes, as Sakura dresses in a huge wardrobe of different costumes.

The animation itself still holds up today with the detailed, high-quality hand-drawn work just shining through the screen, carefully hiding the handful of time-saving tricks that have to be used every so often. In particular the action sequences look brilliant as Sakura flies about the screen. Combine this with some truly great vocal performances and an utterly top-tier soundtrack and you get a show so solid that it’s very hard to find anything to criticise.

If we were pressed, then we do grudgingly have to admit that a small handful of the episodes are stinkers (particularly those which are centred around Kero) and the third season just really doesn’t hold a candle to the first two. It has to be said too that whilst the romances are sweet, some of them just don’t quite work. Sakura doesn’t so much fall for her final love interest as get a sudden off-screen lobotomy that changes her mind and the way that the series resolves the (admittedly slightly problematic) relationships with Yukito don’t really ring true and are a little too quickly glossed over.

There are also a few slight issues with the subtitles here and there with some totally unnecessary dialogue changes (though nowhere near as bad as Cardcaptors we hasten to add!).

But these are at the end of the day more niggles than anything else and the overall quality of the show is just superb. This one is absolutely, unquestionably worth your time and it not only holds up today but stands out as a shining example of just how good a show can be!

9
A must-watch show that's as strong today as it was 23 years ago!