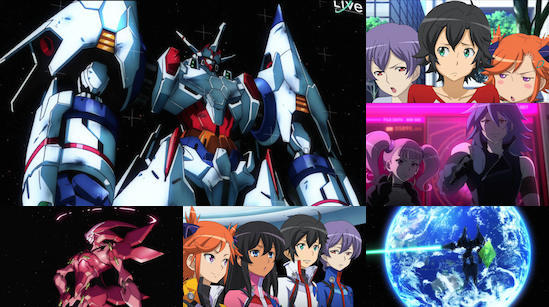 In the last ten years or so, studio BONES have become quite the force to be reckoned when it comes to giant robots. Between the religion-soaked Rahxephon, the coming of age romance of Eureka Seven and the hormonal pomp of Star Driver, the studio has developed its own distinct style while many of the genre's previous powerhouses struggle to recapture their glory days. Now the team behind Star Driver are back again for another stab at an epic robot series in the form of Captain Earth - seemingly cherry-picking the main elements of the studio's robotic back catalogue into one neat little definitive package.

After seeing a giant rainbow-coloured phenomenon on the news, high-schooler Daichi Manatsu returns to his former home in search of the cause - a mysterious boy he once met in a scientific facility there as a child. On his arrival there it isn't long before he's inadvertently thrust into a battle against the Kill-T-Gang - a race of aliens that feed on energy derived from human libido. After somehow summoning a laser handgun known as a Livlaster, Daichi pilots the giant Earth Engine Impacter into battle against the invaders.

From there Daichi joins Globe - an organisation formed to defend against the advances of these aliens. Together with Teppei, Hana Mutou (another child from the facility) and super hacker/self-proclaimed magical girl Akari Yomatsuri, these children form a specialist team acting as Earth's first line of defence against this alien threat.

This first volume not only encompasses the first thirteen episodes of the series, but can also be further divided into two distinct arcs neatly split across the two discs. Naturally, the first half is the introductory phase of the show, bringing both Daichi and the audience itself up to speed with what’s happened so far. Unfortunately Captain Earth features a rather steep learning curve, throwing out a rather off-putting amount of terminology in the first few episodes. Globe, Salty Dog, Designer Child, Impacter, Kivotos Plan - these are just a handful of the nouns viewers will quickly have to become accustomed to if they have any hopes of following this series properly. A particularly confusing aspect is how freely the characters switch between the terms "Kill-T-Gang" and "Planetary Gears” to describe the villains, without any clear indication of the difference between the two. For clarity’s sake, Planetary Gears seems to describe the group itself while Kill-T-Gang refers to their mecha-like alien forms - but the truth is both terms seem to be completely interchangeable.

While it's a lot to process in such a short space of time, the strength of the lead cast is what makes it bearable. While teenagers piloting giant robots is hardly a new concept, Captain Earth is one of those select few stories that does it without trying too hard to evoke Evangelion and make it all about teenage angst. Well, Teppei is suitably angsty (and with good reason given his backstory), but the rest of team balance him out nicely. Daichi is a pretty "by the books" protagonist, but it’s hard to deny Akari's scene-stealing fun or Hana's adorable naivety. Even though some quite clearly contribute a lot more than others, their strengths lie in them being a team to both their characters and to the viewer. Expect some great moments from both Teppei and Akari in these episodes, and a lot of mystery surrounding Hana that should be very interesting to see unfold in the forthcoming second volume.

Meanwhile, the second half of this set moves into a more episodic "quest of the week" style format, as the Planetary Gears begin to search for the remaining members of their group. After a number of episodes taking place in exactly the same locations, these feel like a breath of fresh air as the team visit a variety of different areas. The introductions of these new villains also further capitalise on the show’s flare for good backstory, managing a surprising amount of depth with the newcomers in only one or two episodes. Unfortunately a lot of the time it all feels like its for naught, since as soon as they join up with the bad guys they mostly just skulk around in the background and simply feel like henchmen to the two members that have been there since the very beginning.

But enough about the characters, odds are if you're watching Captain Earth it's the robots that you want to hear about. This is where the show’s visuals shine most of all, with BONES' having lost none of that artistic flare it has amassed over the years. The centrepiece is the Earth Engine – a giant robot boasting one of the most impressive combination sequences for a mecha in recent years. Both lengthy and incredibly detailed, it's a true love letter to the mecha shows of old and creates exactly the sort of spectacle the titular robot deserves with its debut. The scene begins to lose some of that initial impact when it’s abridged and repeated in future episodes as stock footage, but still arguably manages to remain the show's defining moment.

However, despite seeming to promise so much, the Earth Engine's fight sequences don't quite live up to the hype they manage to generate. Usually coming at the end of an episode and with the combination sequence already eating into their precious time, the space battles are sadly short and sparse. With the fighting itself mostly unremarkable, the visuals instead rely on the striking contrast between the blocky aesthetics of the Earth Engine and the more humanoid proportions and movements of the opposing Kill-T-Gang. In perhaps an attempt to offset the lacking space battles, the show also features small-scale skirmishes on Earth using the smaller Earth Impacter core unit. While these fights feel considerably more-action packed than their orbital counterparts, the smaller robot designs are rather generic and uninspired. Each type of combat features the one thing the other sorely lacks, but these episodes never once manage to bring them together for a truly remarkable scene.

Captain Earth's first half gets the series off to a good start, but the problem is exactly that – it's only a start. Despite this volume encompassing just over half of the series each episode feels like set up for what's to come, leaving a sense that the remaining half won’t be able to adequately cover everything in its time frame. Creating a group of likeable, fleshed-out characters has also come at the expense of the robot sequences, which are still yet to properly find their footing. While many will undoubtedly come for the robots, as long as they can wrap their heads around all the exposition it'll be the characters they end up staying for.

7
Terminology heavy and a little lacking where it counts, but nevertheless a promising character-driven first half.