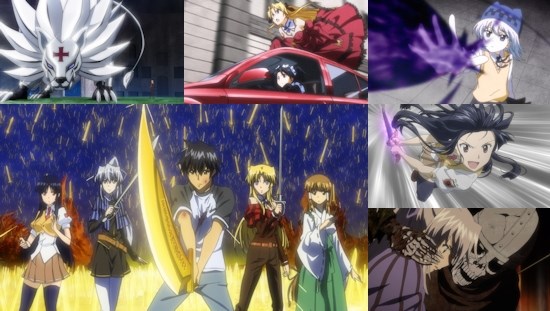 When Campione hit streaming service Crunchyroll in the summer of 2012, to say that my colleague Elliot Page wasn't particularly enamoured of it would be an understatement, as evidenced by his closing statement calling the first three episodes of the series "boring, tedious wish-fulfilment tripe devoid of any effort or craft". Ouch. That negative opinion was certainly still ringing in my ears as I popped the home video release of Campione on DVD into my player - just what kind of nonsense was I letting myself in for, exactly? Perhaps it's at least partly thanks to my low expectations that the series turned out to be a pleasant surprise when viewed in its entirety.

The series certainly begins in an enjoyably exotic fashion, beginning in Sardinia as our protagonist Godo Kusanagi embarks upon a little trip to deliver an ancient tablet to its rightful owner at the behest of his late grandfather. Unfortunately, this isn't quite the idyllic holiday he had perhaps hoped for, and before the first episode is up he's been mugged at knifepoint, haunted by some ghostly character and embroiled in a monster attack on the town.

If all of this isn't stressful enough, events ultimately conspire to have Godo resurrected as a "Campione" of the show's title - a literal god-slayer, tasked with keeping some of the most recalcitrant deities in check using the impressive powers imbued upon him. If this all sounds like a thrilling career, it seems that Kusanagi would rather just enjoy a simple life, but that dream is one denied to him as he is thrown into conflict with some terrifyingly powerful opponents, while his status also brings him to the attention of a growing variety of girls from knights to shrine maidens and all the way to living, breathing goddesses.

If you hadn't guessed from that previous sentence - yes, Campione is a harem anime at its core. Before you roll your eyes and click the "Close tab" button on this review, I will say that this series proves to be an enjoyably accomplished one. For starters, simply the fact that Godo is arguably worthy of girls throwing themselves at him helps the viewer to "buy in" to the show tremendously, and all of the major female characters are entertaining in their own ways even if they never particularly break the mould in terms of the archetypes attached to them. Even Godo himself is at least not detestable as a male lead - although often passive in most events, he does step forward and do what is required of him with no complaint when push comes to shove.

The series also manages to balance its "work" and "play" nicely - there are coherent story arcs that allows us to dig into the meat of its story as Godo comes into conflict with various deities based loosely upon various mythological elements, broken up with more typical harem fare such as visits to hot springs and so on. It's a balance that stops the series ever becoming overly boring - just as you start to worry about a story arc outstaying its welcome you're treated to a little levity before the series moves on in another direction. There's nothing approaching a conclusion to its story, as you might expect from an adaptation of a light novel series, but the show does at least find a reasonably satisfying point to bring things to a close.

Perhaps the most questionable aspect of Campione is where these two facets of the series intersect, and there's no way of tip-toeing around it so let's be blunt - Godo learns the skills that he needs to fight from his female comrades by snogging them, with information disseminated quicker if the snogging in question uses tongues as well. While the rest of the show is actually pretty reserved in its fan service for the most part, this element alone stands out as outright, craven pandering. It's unique, we'll give it that, and it could be argued as refreshing in a medium where kissing is always treated as such a big deal, but that doesn't hide the fact that it's also blatant titillation designed to help the harem aspect of the series along.

Looking at the show's broader package, there's a lot to like - visually the series is colourful with no shortage of attractive character designs to the point where we'd suggest that the UK Blu-Ray release is the preferable format to pick up. Although its action isn't exactly breath-taking. it makes good use of what it has available to it to be engaging, matching the rest of the series in making use of a variety of locations and smart visual touches to allow it to punch above its weight in terms of its perceived scope. The show also boasts good performances from both the English and Japanese voice casts, and we ran into no major subtitle issues, rounding out a solid release that leaves us no cause for complaint.

While Campione is certainly home to some very blatant wish-fulfilment, my opinions diverge from our previous coverage of the series at that point - rather than boring, I was broadly entertained by the series and enjoyed much of its story-telling. It might not be a classic (even within the harem genre where such things are rare), but it is fun enough to watch if you like the look of its plot or aesthetic. If you can pick it up at the right price, there's enough entertainment within this series to be worthy of at least cursory consideration, although as our prior review has proved your mileage may vary.

6
Campione isn't the most original series you'll ever see, but it's sufficiently entertaining to be enjoyable and has an accomplished visual treatment to back it up.
LATEST REVIEWS