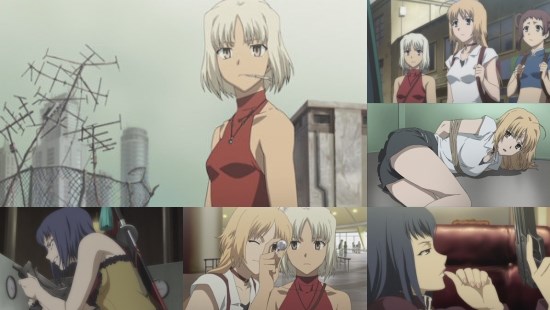 I signed up to review Canaan on the strength of two things: it involved synesthesia (which I think is fascinating) and the concept of the show was the brainchild of the Type Moon co-founders. While I don’t love all of their output, I still feel a certain pull that compels me to at least investigate their works. So, how does Canaan shape up?

At the top of the show, you are introduced to reporter and photographer duo Minoru Minorikawa and Maria Osawa, staff members on a rather low-rent newspaper who are sent to Shanghai to cover an upcoming global anti-terrorism conference. Once there, Maria runs into an old friend, the white haired super-assassin Canaan who saved her life once previously and is intent on doing so again as a firefight breaks out at a local festival. From here, Maria and Minorikawa begin to find themselves embroiled in a series of shadowy incidents linked to the mysterious terrorist cell “Snake” and, through a combination of accident and intent, they start to uncover a hidden bio-weapon test that links all the various factions and tragic characters they encounter.

I wanted to like Canann, I really did. It contains so many things that either interest me or could have made for an interesting story: Synesthesia in particular, but not forgetting a massive bioweapon conspiracy, multiple shadowy organisations clashing behind the scenes, gunkata, terrorist attacks, and the US president yelling “Love And Peace!” at the top of his lungs. The problem is that there is far too much in Canann to cover well. I mentioned on the recent UK Anime Network podcast that the end result came across as flat, and that is exactly how feelings on the show have shaken out. None of the many different moments in the show have the attention needed within the narrative to make much of a dent on you, and so the whole thing feels like it’s sweeping past you with no impact. There are quite simply too many different threads being woven at any one time for you to keep track of or to give any of them their proper screentime - it all ends up being a loose mess.

This isn’t helped by the fact that it takes so damn long for the series to get itself together and tell a coherent story - the entire first disc of this set (five episodes) feels like a group of disconnected set pieces with no real grounding or weight to them. A lot of the elements that are introduced here come back later on in the story in various ways, but everything feels so adrift in this opening portion that you have a hard time retaining any of the knowledge imparted. When the curtain is pulled back on these various elements later it feels more like a pleasant accident than any attempt at foreshadowing or plotting. Episode six opens with a narration that finally manages to begin pulling everything into a story, as if someone on the writing staff suddenly realised that having a central conflict was actually a good thing that would keep the audience interested. Not to be too cruel, but had I not been watching the show for review I would likely have given up before reaching this point.

The woes of the story don’t end there - the writers seem incapable of letting a plot thread end. Multiple times throughout the series a character or a plot thread will reach a seemingly natural ending to their arc, such that you think that they are done and dusted, only to have it be crudely resurrected a short while later. One particular case of this problem comes to dominate several episodes in the middle of the series, dragging it down just as it seems to be on the up - just as things are getting interesting a second-tier antagonist pops up to outstay their welcome by several orders of magnitude, making me almost vocally wish for their prompt removal from the series as they were an obvious roadblock to any further plot or character development. These resurrected plot lines provide nothing new and in fact actively remove closure from the story by trivialising previous events. The first time this happens, I chewed my lip and thought it was a little gross, and by the final close of the show I was up in arms as it had undone most of the emotional impact and actual finality of the ending. I really can’t underscore more how exasperating this is; to watch a show grab failure from the jaws of victory.

Alongside all this is the nagging feeling that part of the back story of the cast in the show is omitted - because it is! I was unsure of the reason behind this until I came to write this review but it turns out that this series is a direct sequel to a scenario contained within a Wii visual novel - these events are mentioned in the series but never fully explained or made clear, leading to the vague feeling that you are missing a piece of the puzzle.

All of the above gripes are a massive shame as, like I mentioned earlier, I really wanted to like the series. In the few rare moments when it is firing on full cylinders it is an interesting tale that could have been so much more engrossing if not for its raft of issues. It has all the right ideas and some fascinating characters, but it simply cannot use them effectively.

One thing that really does stand out about Canaan is how amazing all of the backgrounds look. The sheer amount of detail and care poured into them is astounding and more than once I had to rewind to read subtitles as I was transfixed by the artwork. The character art itself is somewhat simplistic, which comes in handy for the odd frantic action sequence or gunkata fight where it really shines, but is otherwise unremarkable. Also unremarkable is the soundtrack, which apart from a few rather overly melodramatic tracks is generally forgettable.

When I had finished Canaan, I felt frustrated. After a poorly paced first third the show finally seemed to find its feet only to falter under the weight of its own plot, leading to it crashing down as it undid its own endings up until the final post-credits sequence. It really feels like a waste of what could have been. A damn shame.

English and Japanese stereo audio with English subtitles. Extras consist of a clean opening and closing animation and trailers for other shows, which can be found on the third disc.

4
Somewhere within Canaan is an interesting story, but it is buried under a mass of flaws that cannot be overlooked.
LATEST REVIEWS
Girls' Last Tour